Get the app Get the app
Get the latest news on coronavirus impacts on general aviation, including what AOPA is doing to protect GA, event cancellations, advice for pilots to protect themselves, and more. Read More
Already a member? Please login below for an enhanced experience. Not a member? Join today
Community Flying Clubs Club Connector Newsletter Aircraft Spotlight: The Cessna 162 Skycatcher - A Modern, Cost Effective Trainer 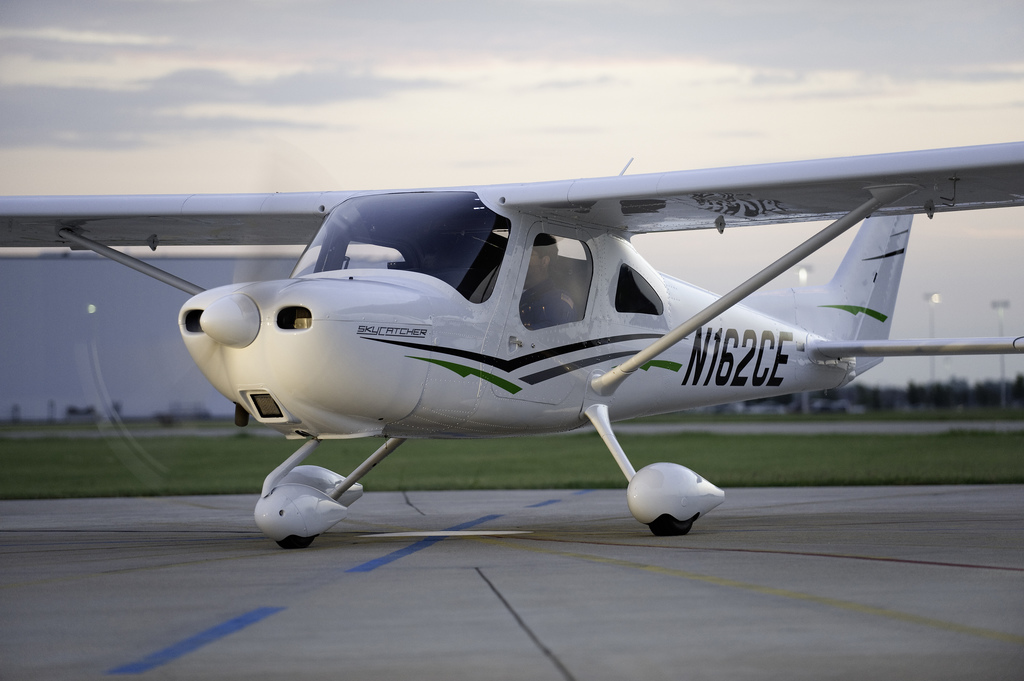 The Cessna 162 Skycatcher was designed as a light-sport replacement to the company’s venerable C-150/152 line, which it will always be compared with for better or worse. Slower manufacturing time and increased costs eventually resulted in Cessna ceasing production after a few years, but there are about 200 Skycatchers flying and several available that a club could pick up. With its modern avionics, innovative controls, and low operating costs, it could prove attractive to a flying club.

This month we spoke with two clubs: RFTS Flying Club based at Tacoma Narrows Airport (TIW), which has been operating a Skycatcher since 2011, and Airhawks Flying Club, based on Orcas Island, Washington.  The latter is in the process of forming with a Skycatcher as its first aircraft. Dennis Cuneen from RFTS and Bob Waunch from Airhawks share their experience with the Skycatcher.

The Cessna 162 Skycatcher was designed to be a cost effective aircraft to operate. It has a 100-hp O-200 engine that burns about 5 to 6 gph and has a recommended TBO of 1,800 hours or 12 years. Airhawks Flying Club will charge $100 an hour, Hobbs time, wet, but that is expected to go down to $65 an hour after a year, when the club no longer has to lease the airplane. The basic operating costs are similar to the C-150/152.

RFTS charges members $87 an hour, Hobbs time, wet. Of that, $40 is a leaseback fee to the owners. “So basically you can run the thing at $50 an hour for gas, oil, and maintenance,” Dennis said.

One of the challenges the Skycatcher had during its production run was purchase price. Initially advertised at $109,000, the price rose to $149,000, driving many buyers away. A check of prices for a Skycatcher now found a range between $60,000 and $80,000 with most aircraft having between 400 and 800 hours total time. 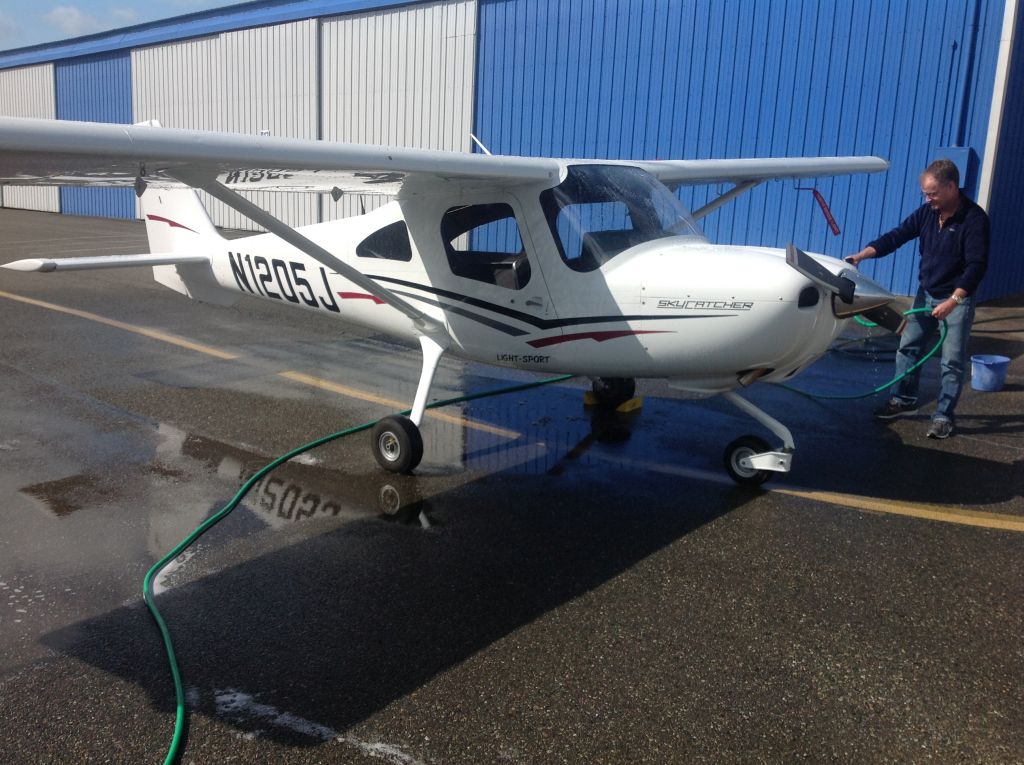 One of the reasons is there are no panels to take off. “The fuel lines are exposed. The control cables for the ailerons and flaps are exposed. You can see the connections,” Dennis said. “You turn and look into the baggage compartment and you look all the way to the tail cone. The mechanic can do his annual inspection pretty much standing outside the airplane.”

There are a number of mandatory service bulletins that Cessna put out. One is to strengthen the spar where the strut attach point is. “There is no such thing as an AD on these airplanes. There’s no such things as an STC on these airplanes because Cessna has to be the one to say here you can do these things to the airplane,” Dennis said. That is true of any LSA. Regulations require the manufacture to approve any changes to the aircraft.

One potential problem with this aspect of LSAs and the Skycatcher is that Cessna has stopped supporting the aircraft. For example, Dennis would like to add a Garmin GTX-345 transponder to comply with the ADS-B out mandate coming in 2020, but Cessna has to approve it, which so far it has not. The unit would easily slide into the panel, but it can’t be done until Cessna OKs it, and so far the company has not been responsive to requests to do so, Dennis said.

Operating an aircraft with a limited production run could have some disadvantages. Parts may be harder to come by as time goes on and Dennis said salvage yards might be the best place to find parts in the future. He also said, “It’s a fairly robust airplane. I don’t think there is going to be any significant maintenance issue in the future.”

Even though the Skycatcher had a limited run, it was produced by Cessna, which makes getting insurance easy. Having a higher hull value then a C-150 means insurance also will be higher. Airhawks pays $4,000 a year for insurance that covers all of its members. RFTS is paying $3,500 a year with a hull value of $75,000. 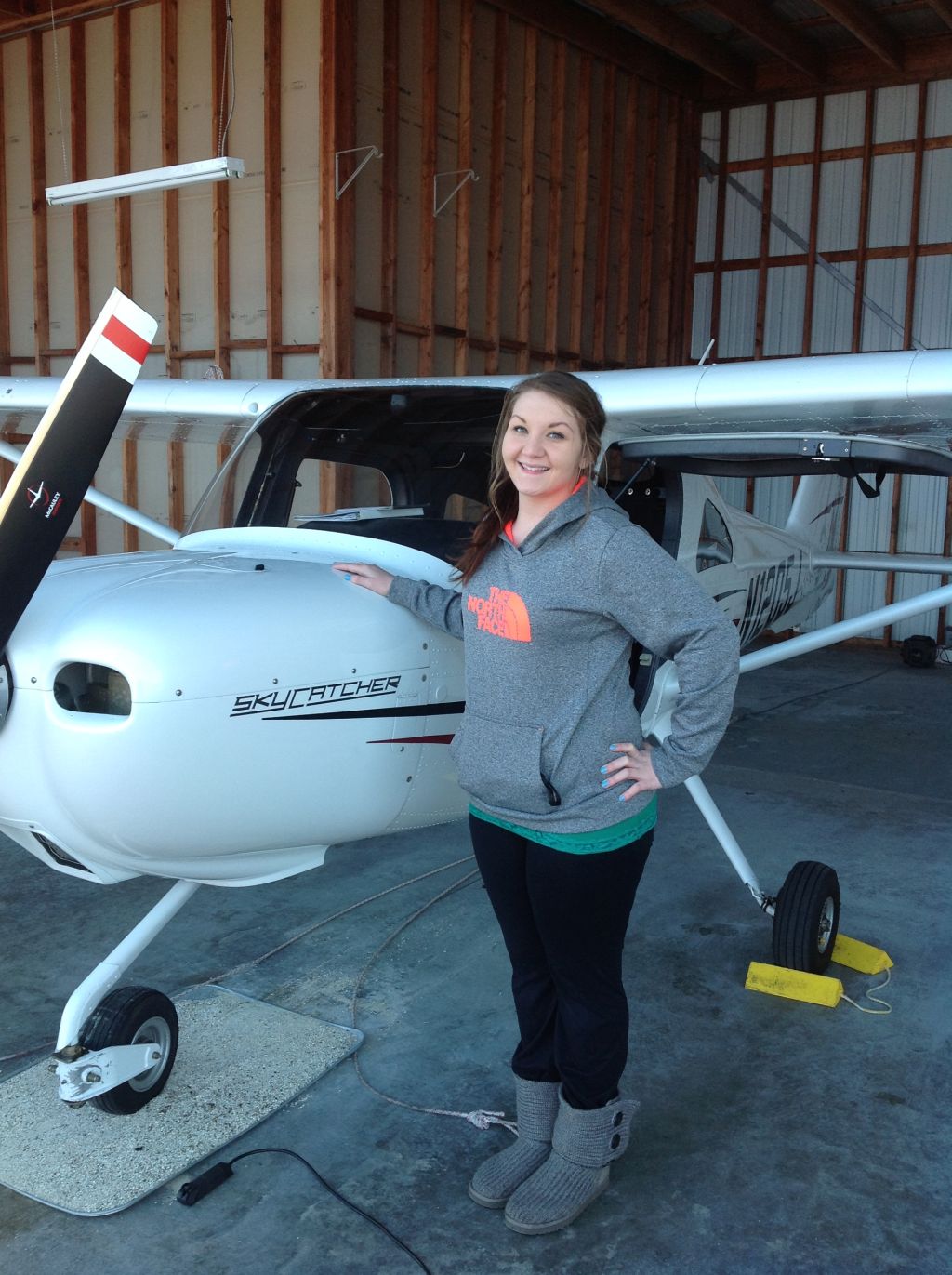 The Skycatcher was made for training in the modern age. The Garmin 300, made specifically for the Skycatcher, is similar to the G1000, but smaller and more basic. However, it has everything a well-equipped glass panel aircraft has – airspeed and altimeter tapes, GPS, comm radio, flight information, navigation information, VFR and IFR charts, and synthetic vision.

“If you’re going to do a lot of training, it’s a great airplane for training,” Dennis said.

The plane has a free castering nose wheel, so taxiing is done through differential braking, similar to a Grumman Tiger or a Lake Amphibian. The seats are in a fixed position, but the rudder pedals are adjustable. While the aircraft has many modern features, there are some old throwbacks – the fuel gauges are tubes at wing level, like an old Piper Cub, and the flaps are manually operated with a Johnson bar between the seats.

The control stick is a cross between a yoke and a stick. It is in the shape of a stick but moves forward and back like a yoke, and then side-to-side. While it seems a bit different, it has the feel of flying a traditional floor-mounted stick but provides ample legroom since the connections go through the panel. Pilot reports talk about the plane being light and responsive, but also note that as an LSA it can be challenging in stronger winds.

One drawback is the max gross weight. “The useful load is a limiting factor. I think all you’ve got is 480 pounds,” Bob said. “You put 20 gallons of fuel and anyone right around 200 pounds and you’re pushing it. One of our instructors is 230 pounds, so there are already a couple guys he won’t be able to fly with unless they only put in seven or eight gallons of fuel. So it’s too limited in that regard.” 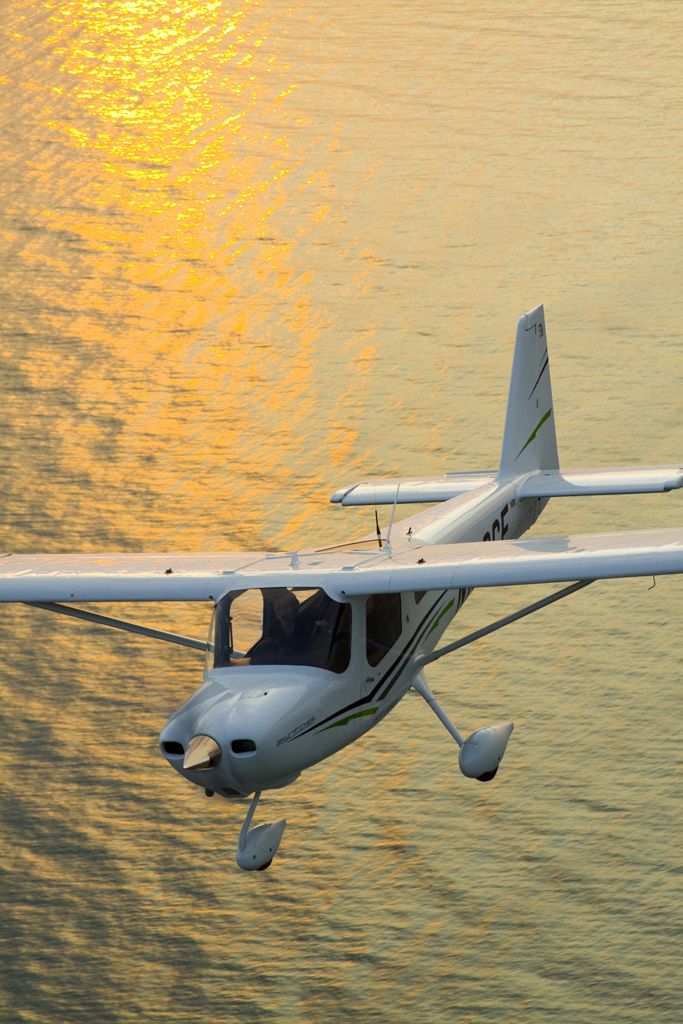 With a published cruise speed of 112 knots and a 470-nm range based on 20 gallons of fuel, it probably won’t be your first choice for a cross county aircraft. “With the 162 I don’t think people will be taking too many long cross countries,” Bob said. “I think it will mostly be short hops around the area.”

Dennis agreed, “It is not something that you would want to take on a long trip. For short cross-countries, it’s good. Most people don’t use an airplane to go a 1,000 miles, they use it to go 200 or 300 miles and this will work real well for that.”

RFTS members have flown the Skycatcher to fly-outs in Oregon and to the San Juan Islands, about an 80-mile trip. He said it is faster than the C-150 and the club’s 145-hp C-172, cruising at 100 knots at 2400 rpm or 107 knots at 2550 rpm. However, the higher power setting means more noise. “There is absolutely no sound deadening material in it,” Dennis said. “The only padding in it is the seat cushion, so a noise-canceling headset is really worthwhile.”

It’s a small plane, with a useful load of only 480 pounds. “When you put fuel in it, you really have a limitation,” Dennis said. With a full 24 gallons, the useful load drops to 340 pounds. So if you and your friend are large, don’t plan on flying too far unless you’re willing to stop often for fuel.

Another consideration is that the Skycatcher as an LSA is limited to daytime VFR flight only.

“It is a fun airplane. It handles very nicely, sprightly,” Dennis said. “One of our club members flew F-15s and B-1s and he flies it exclusively. He doesn’t fly anything else.”

“I think the fun factor is that it looks like a brand new airplane. It looks like it came off the showroom [floor],” Bob said. And who doesn’t like getting in a new airplane featuring a glass panel?

“It’s got everything on the one [Garmin] panel,” Bob said. “All the engine instruments, your tach, you name it. It’s a complete glass display so it’s very nice.”

Add to that the gull-wing style doors that open up toward the wing and the Skycatcher adds a little pizazz to a ramp. The unique panel-mounted stick also makes the Skycatcher fun to fly – it provides the feel of a floor-mounted stick with the roominess of a yoke, making the cabin comfortable, not to mention easy to fly and simple to maneuver. 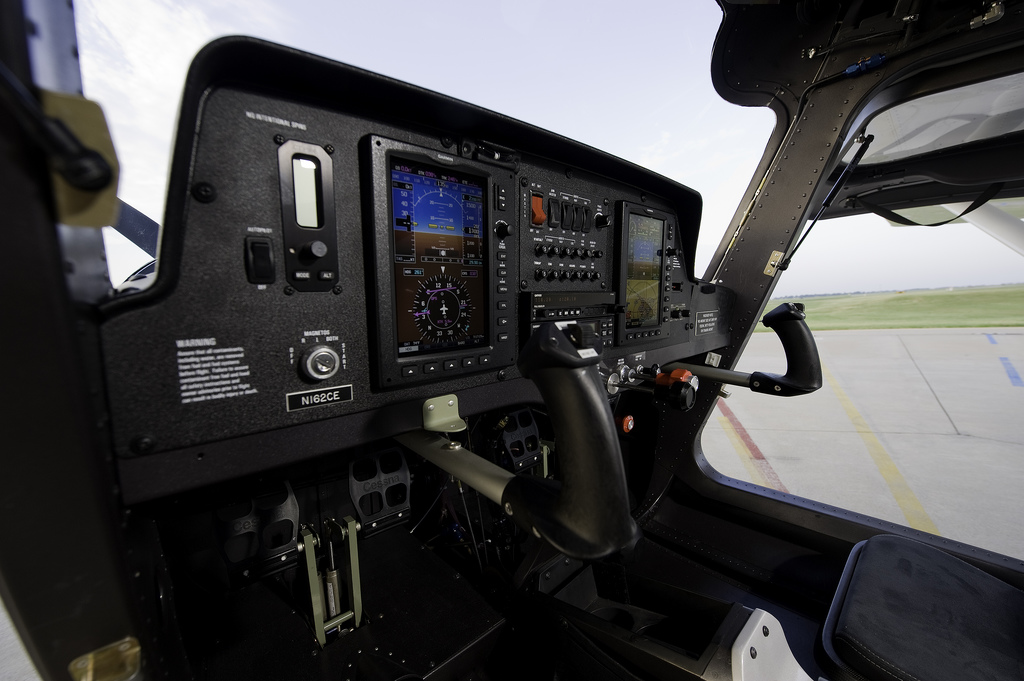 The Cessna Skycatcher offers clubs a new plane with modern avionics designed specifically for training. It’s gullwing doors, unique stick, glass panel, and overall new-plane feel could make it an attractive plane, particularly to younger members. It has low operating costs, a proven, reliable engine and the Cessna name. The drawbacks, like any LSA, are the weight limits that pose a challenge for larger pilots or make cross-country flights less attractive. For a club looking for a reliable two-seat aircraft for members to train in or to do some local flying and short cross-countries, the Skycatcher is worth looking into.