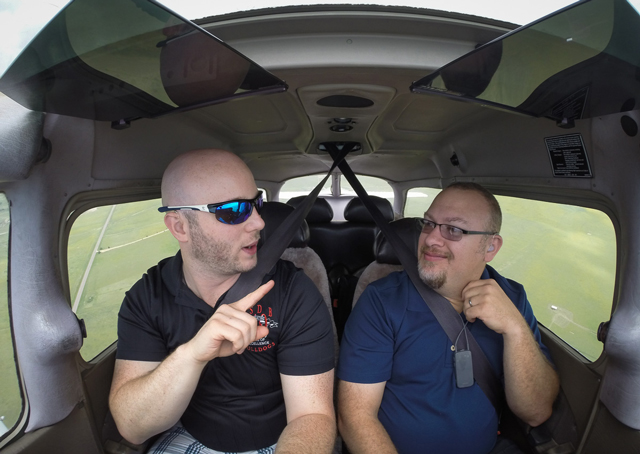 For pilot Neil Anthony Thomas, radio communication has sometimes meant challenges, confusion, or frustration. So when Thomas, who lost his hearing from a childhood illness at age 3, had an opportunity to fly a Piper J-3 Cub, he felt at home: He didn’t have to worry about the radio because it didn’t have one.

“It was really important to me to have that bond with an airplane that kind of understands me,” said Thomas, who now flies light sport aircraft out of Colorado Springs Municipal Airport. The Class C field has been the setting for another bond, this time with a community that understands him, through fellow deaf pilot Todd Barker.

Thomas said he met Barker at the airport when he noticed Barker’s hearing aids and they began signing to one another. The two became friends, and Thomas now works part-time for Barker, aircraft detailing manager at Colorado Springs’ Peak Aviation Center; the pilots now fly together out of the busy commercial, military, and general aviation airport. Many people don’t realize that one can fly without being able to hear, they said, but they have found encouragement in the tight-knit deaf pilot community and hope to pass on that encouragement to others.

Barker said the biggest question he gets as a deaf pilot is how he can fly if he can’t talk on the radio. In fact, radio communication is not required for the vast majority of American airspace.

“I’ve actually taken the time to take a sectional and just highlight the spots where you cannot fly without talking to anybody, and it’s just tiny dots,” he said. “… The stuff that we can’t do is no different than what you can’t do if you don’t want to talk on the radio.”

Pilots can fly to nontowered airports without using the radios, and sometimes may arrange in advance to operate at a towered airport by using light gun signals. Yet Thomas, whose father was an airline pilot, said that when he was younger he figured he’d never be able to fly because he was deaf. But one day while flying RC airplanes in Alaska, he said, he saw manned airplanes overhead and decided to take a lesson.

In training, Barker and Thomas found ways to communicate with their instructors that minimized the need for talking in the cockpit: using a longer-than-standard preflight briefing, writing out a plan for each flight for reference during the flight, using hand signals. Thomas said his instructor might tap the instrument panel and point to the altimeter. “We knew, OK, you’re off a little bit.”

In an interview, Barker and Thomas wore hearing aids and paid close attention to lips, clarifying points to one another using sign language. In the air, Thomas said he links his hearing aids to the radio using Bluetooth and can understand people as long as they used standard terminology, though expressions like “square the base” would throw him for a loop during his training. Barker can transmit on the radio but relies on light gun signals for a response. Thomas and Barker follow recommended procedures like the standard traffic pattern entry at nontowered airports, but Thomas said he’s run into problems when other pilots deviate from accepted procedures and use the radio to solve it.

The airport community at Fresno Chandler Executive Airport in California, where Barker trained, was warm and welcoming, Barker said, and the tower at Colorado Springs welcomed him as well. While Barker’s private pilot certificate contains the limitation, “not valid for flights requiring the use of radio,” the General Aviation Airman Designee Handbook clarifies that this does not necessarily prohibit a pilot from flying in airspace that requires radio use if the pilot has prior authorization from the jurisdictional air traffic facility and can receive instructions via light signals or electronic means of communication. Colorado Springs Tower developed transmit-only procedures for Barker, and even bought new light guns so he could see them better, he said, but the Denver Flight Standards District Office no longer allows deaf pilots to operate at towered fields, Barker said. While the restriction is frustrating—especially since “we had a pretty good system going”—Barker flies with other pilots while he is in the Colorado Springs Municipal airspace.

Beyond radio communications, deaf pilots also may not rely on auditory cues that other pilots use to recognize signs of trouble. Thomas said an instructor giving him a checkout asked how he’d recognize an engine problem if he couldn’t hear the engine; Barker, who obtained a statement of demonstrated ability to earn his pilot certificate, said he had to explain how he could recognize a stall without hearing cues like the stall horn. Instead of relying on auditory cues, they said, they learn the feel of the airplane.

“The deaf pilots that I flew with have really good stick and rudder skills,” Thomas said. “They feel what you’re supposed to feel.”

Thomas, who earned a sport pilot certificate, did not have to obtain a statement of demonstrated ability but said he went through a four-hour oral exam. As a deaf pilot and with only 20.2 hours in his logbook, he felt that he needed to do everything by the book, he said. Both pilots said they feel like they're held to a higher standard of airmanship because they are deaf. “I just made sure that everything I did was 100 percent proficient,” Thomas said.

‘Get out there and do it’

Thomas said he earned his pilot certificate without having met another deaf pilot, but in the year since he met Barker has met six or seven. It would have been that much better if he had known other deaf pilots while training, he added.

That’s why Thomas, a teacher at the Colorado School for the Deaf and the Blind, wants to become a ground and sport pilot instructor. He said a lot of deaf and blind students feel like they can’t do something, and so he’s trying to expose more students to aviation to show them that they can. Two of Thomas’ students now work for Barker as detailers at Peak Aviation Center during the school year as part of a work study program, and Thomas said he’s got a waiting list of students he plans to take flying once they graduate.

Barker plans to start advanced flight training with a goal of working for crop dusting pilot Aaron Peterson, who also is deaf, in Warren, Minnesota. He said he has advice for others who may be thinking of learning to fly: “Get out there and do it because it'll be something you will never regret and will be the most rewarding thing you've ever done.” 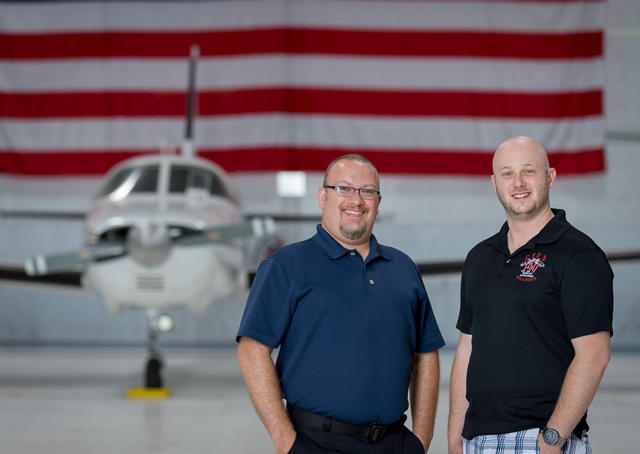 Pilots who are deaf and partially deaf may find resources and camaraderie through the Deaf Pilots Association, which seeks to "demonstrate not only to the aviation world, but also to the larger hearing world that deaf people can become pilots despite not being able to hear, that use of radio is not required in order to earn private pilot and commercial pilot certificates." Members include pilots who use American Sign Language, who employ speech and lipreading, who are hard of hearing, and who are late-deafened, according to the website.