Get the app Get the app
We will be performing maintenance on our systems Sunday, 8/21, beginning at 12:00 A.M. ET and ending at 6:00 A.M. ET. During this time, you may experience intermittent service outages. We appreciate your patience.
News & Media Thunderbirds, Blue Angels have accidents on same day

Editor's note: This story was updated June 9 to reflect the latest information regarding the accidents and the status of the elite military demonstration teams.
Two military air demonstration team crashes rattled onlookers from one side of the country to the other June 2. One of the crashes claimed the life of a U.S. Navy Blue Angels pilot; a U.S. Air Force Thunderbirds pilot survived the crash of his F-16. 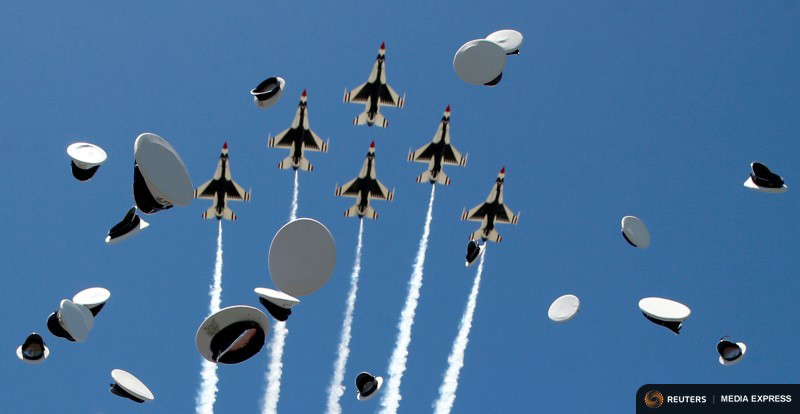 U.S. Marine Corps Capt. Jeff Kuss, 32, was killed when his F/A-18C Hornet crashed just after takeoff for a June 2 practice in advance of the Great Tennessee Air Show in Smyrna, Tennessee, near Nashville. Kuss, who flew the No. 6 (opposing solo), was mourned by many, and his body was flown to Naval Air Station Pensacola, where the team is based, aboard the team's C-130 Fat Albert, escorted by Lead Solo Ryan Chamberlain on June 7, the Pensacola News Journal reported.

According to the U.S. Air Force Thunderbirds website, Thunderbird No. 6 pilot Maj. Alex Turner was in good medical condition and later released from the hospital after ejecting from an F-16 near Peterson Air Force Base in Colorado. The Thunderbirds had performed a six-ship formation flyby of the U.S. Air Force Academy graduation ceremony in Colorado Springs, Reuters reported, where President Barack Obama had just delivered the commencement address. After leaving the graduation ceremony, the president visited the pilot and expressed his relief that the airman was not seriously injured, the wire service said. There were no reported injuries on the ground.

“The cause of the mishap is currently under investigation,” said Brig. Gen. Jeannie Leavitt, 57th Wing Commander. “Major Turner’s ability to steer the aircraft away from any populated areas and safely eject speaks to the quality of his training.”

The Thunderbirds canceled its appearance at the Kirtland Air Force Base Air Show that was scheduled for that weekend. After a brief stand down, the Thunderbirds returned to the air June 7, but the team’s upcoming performance at the North Kingstown, Rhode Island, airshow June 11 and 12 was canceled and future airshow appearances are still to be determined.

The Blue Angels returned to Pensacola and announced plans to stand down “for an undetermined amount of time,” the Navy reported. “This stand down will give investigation officials time to gather facts and ensure the continued safe operations of the squadron.”

The Navy Times reported June 8 that the Blue Angels have canceled planned June airshow appearances in Syracuse, New York, and Dayton, Ohio. The Navy has offered airshow organizers appearances by the Tactical Demonstration Team composed of F/A-18 Hornets in the fleet replacement squadrons on both coasts. A spokeswoman told the Navy Times that more information on future airshow appearances by the Blue Angels may be available in a few days.