Get the app Get the app
Get the latest news on coronavirus impacts on general aviation, including what AOPA is doing to protect GA, event cancellations, advice for pilots to protect themselves, and more. Read More
Already a member? Please login below for an enhanced experience. Not a member? Join today
News & Videos Get your ATC privatization checklist

Most pilots will never face a real in-flight emergency, but they still train for them and develop procedures to deal with potentially dangerous situations. Engine failure, cabin fire, inadvertent icing… no matter what the scenario, pilots always rely on the checklist. Today, the entire general aviation community is facing a new type of emergency in the name of air traffic control privatization. Don’t worry, AOPA has developed an emergency checklist. 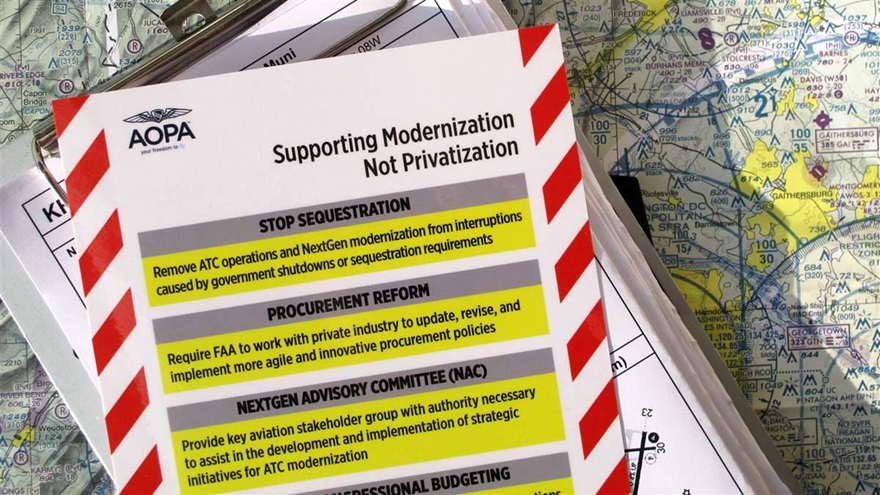 Congress will be considering a vote this September on the 21st Century AIRR Act (H.R. 2997), which would remove ATC from the FAA and hand control of our skies to the airlines. AOPA’s checklist addresses both criticisms of the proposal and recommended policies to improve ATC.

One side of the checklist points out the flaws of this so-called “privatization.” Max B. Sawicky, an economist with the Economic Policy Institute, wrote that in the legislation “there are no entrepreneurs, no competition and no prices.” In the Fox News op-ed, Sawicky also implies there will be safety risks in removing the FAA from ATC. “It becomes less easy to determine responsibility for lapses in safety, and with airplanes, lapses in safety can be catastrophic.”

Aside from the “privatization” issue, the checklist states the legislation would create a too-big-to-fail monopoly costing some $100 billion to implement that would favor large airports over rural America. Additionally, putting airlines in control of the skies to improve situations is laughable as nearly every airline has gone bankrupt. Airlines are responsible for 50 percent of flight delays and are behind in equipping aircraft with modern technology.

“Pilots are familiar with checklists, which is why we developed this to help them understand the dangers of so-called privatization, and what can be done better,” said AOPA President Mark Baker.

One pilot who has a good grasp on checklists is Chesley “Sully” Sullenberger, known for the most spectacular water landing of all time. With a background spanning more than 50 years in airlines, the military, and GA, Sully knows aviation and is taking a public stand against the legislative push for ATC privatization.

Now that pilots have a grasp on the emergency at hand, they can look at how to alleviate the situation. As mentioned in the checklist, our ATC system works very well, but it can still be better, and AOPA strongly supports modernization—the subject of the flip side of the checklist.

AOPA believes in providing the NextGen Advisory Committee with the authority necessary to assist in developing and implementing strategic initiatives for ATC modernization. Despite false claims by the airlines, NextGen is delivering benefits to the industry on time and on budget.

Congress has funded the FAA very well over the years, going from a $3.2 billion dollar budget in 1980 to more than $16 billion today, and as a result our aviation system is the envy of the world. Biennial congressional budgeting and allowing for a predictable and stable funding stream for FAA operations will help improve modernization.

With Congress set to return from recess in early September, it’s time to stop thinking about “what if” scenarios. Privatization is a threat now, so grab your checklist and oppose H.R. 2997. AOPA is asking members, pilots, and supporters to continue to contact their representatives in the House by calling 855/383-7330 or visiting AOPA’s ATC Privatization page.