New general aviation safety data suggest that a key accident rate remained at historic lows even as activity increased, the AOPA Air Safety Institute announced at an Aug. 23 news conference, adding that it will be reaching out to aircraft type clubs and other members of the GA community in a joint bid to achieve even more improvement.

The measure of GA accidents against the number of hours flown remained at its record low for a second consecutive year in 2014, a year that saw overall GA flight activity pick up slightly after a long decline.

The 952 noncommercial fixed-wing aircraft accidents in 2014 amounted to a reduction of nine accidents from 2013, and resulted in an essentially unchanged accident rate of 5.78 per 100,000 hours, according to the 26th Joseph T. Nall Report, the review of GA accidents for the most recent year for which reasonably complete data are available. Published by the AOPA Air Safety Institute, the highly respected and often-quoted report is the most comprehensive analysis of GA safety data available. It is named for a former National Transportation Safety Board member who died in an airplane crash in South America in 1989.

The year’s 229 fatal accidents caused 354 individual fatalities, a three-percent decline from 2013. The incidence of fatal accidents, however, increased by 11 percent, the report said.

Fatalities in accidents on noncommercial fixed-wing flights rose by 15, or five percent. The 11 fatalities on fixed-wing commercial flights marked a decline of 39 percent, year to year.

An inverse relationship occurred with helicopters. Noncommercial fatalities declined by 18, or 43 percent, while the number of fatalities on commercial flights climbed from eight to 13.

Overall, the results indicate that the significant improvements and historically low accident rates registered in 2013 “proved not to be a one-time statistical anomaly,” wrote AOPA Air Safety Institute Executive Director Richard McSpadden in his Publisher’s View in the Nall Report. “Across the general aviation community, we can take pride that our collaborative efforts appear to be having a positive, sustained impact.”

Accident causes tend not to vary significantly from year to year, a trend the new report confirmed, noting that pilot-related mishaps continue to account for about 75 percent of all accidents—20 percent of which were fatal. (Pilot-related accidents refer to accidents that reflect specific failures of flight planning or decision-making, or the characteristic hazards of high-risk phases of flight.)

Types of pilot-related accidents included mishaps occurring during landing; takeoff and climb; fuel mismanagement, which was up 10 percent; and maneuvering at low altitude.

Given those statistics, McSpadden also acknowledged “that there is more work to do and further improvements are well within our capability. Troubling and stubborn accident categories remain. The wide discrepancy between pilot-related and other types of accident causes and the notable differences in accident rates between commercial and personal flying illustrate that further improvements in general aviation safety are needed and achievable.”

“The overwhelming majority of these accidents are avoidable, so if we can convince more pilots to access safety information, we can drive the accident rate even lower, and save lives,” he said. “That is why numerous industry leaders and type club presidents are joining the Air Safety Institute in a push to reach more private pilots with safety information in a program we call ‘Find one, bring one,’ which encourages pilots to find a pilot not accessing safety information and bring them to safety.”

McSpadden has long been a strong advocate of type clubs, and noted their importance in his June Safety Spotlight column, pointing out the clubs’ ability to “help pilots and aircraft owners elevate every aspect of their aviation experience.”

When addressing type club leaders in July at EAA AirVenture in Oshkosh, Wisconsin, McSpadden’s call to “join together for a call to action” received strong support as he outlined a three-part safety-building strategy consisting of having pilots bring the so-far “unreachable” members of the aviation community into the safety-awareness fold under the “Find one, bring one” plan; get more pilots to join type clubs; and encourage all pilots to focus their training and study on the specific flight realms that continue to cause the most trouble: landings; takeoff and climbs; low-altitude maneuvering; and fuel management.

The Air Safety Institute also released the 2015-2016 GA Accident Scorecard, a brief statistical summary that supplements the Nall Report’s detailed examination of 2014 data. It notes that after arresting a seven-year decline in 2014, noncommercial fixed-wing flight time increased more than five percent in 2015, while the rate of accidents remained at the low level achieved the previous year. The number of fatal accidents declined by two.

In 2016, there was a three-percent increase in accidents, but fatal accidents declined from 20 percent of the total to 16 percent. For the fourth straight year, 2016 had fewer than 1,000 noncommercial fixed-wing accidents, of which fewer than 200 were fatal, “levels not previously seen in the post-World War II era. There were 156 in 2016, 6 percent below the previous record low of 167 recorded three years earlier,” it said.

AOPA continues to focus on a wide range of efforts to bring about those improvements to GA safety, in collaboration with government agencies and other aviation organizations.

For more than 60 years, the Air Safety Institute has produced free programs to help pilots fly safer. From groundbreaking online courses to popular live seminars and videos, the wide range of offerings covers the spectrum of aviation safety education.

In addition to publishing the Joseph T. Nall Report, the Air Safety Institute is continuing to add educational content and programs that specifically target the leading causes and circumstances of GA accidents. 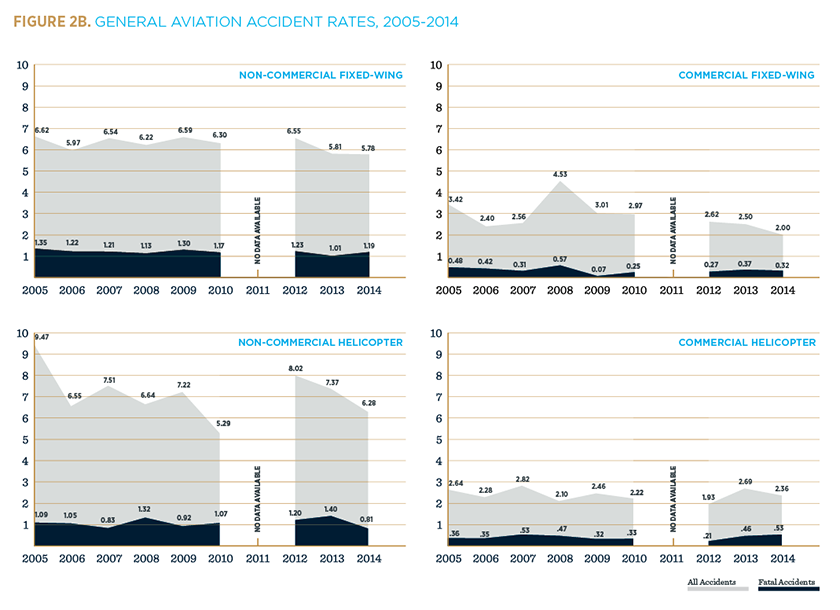 Dan Namowitz has been writing for AOPA in a variety of capacities since 1991. He has been a flight instructor since 1990 and is a 35-year AOPA member.
Go to Dan Namowitz's Profile
Topics: Air Safety Institute, Training and Safety