Get the app Get the app
Get the latest news on coronavirus impacts on general aviation, including what AOPA is doing to protect GA, event cancellations, advice for pilots to protect themselves, and more. Read More
Already a member? Please login below for an enhanced experience. Not a member? Join today
News & Media Spectacular Catalina fly-out caps AOPA Fly-In

A dozen pilots and their friends gathered atop California’s rugged Catalina Island near the departure end of Runway 22 as the sun dipped into the Pacific Ocean amid an explosion of purple and orange. Navion pilot Pat Mullen summed up the experience as “the perfect way to put an exclamation mark on the AOPA Fly-In to Camarillo,” during the association's inaugural fly-out following a regional event. Pat Mullen taxies his 1948 Navion past the setting sun at Catalina Island's Airport in the Sky during an inaugural fly-out hosted by the Cessna Pilots Society following the AOPA Fly-In at Camarillo, California, April 29. Photo by David Tulis.

Pilots of seven aircraft participated in the fly-out organized by the Cessna Pilots Society’s Mike Jesch, a Cessna 182 owner who hosted the overnight outing and briefed participants on the hilltop landing strip’s nuances. Many had attended an AOPA Friday workshop detailing ocean and mountain flying techniques that better prepared them for flying to Catalina. Despite its proximity to greater Los Angeles, pilots flying to Catalina encounter both during the 26-mile overwater hop.

Catalina Island is host to buffalo, prickly pear cactus, and unlimited stargazing from its windswept 1,602-foot-elevation Airport in the Sky. The scenery that unfolded through the windscreens of arriving aircraft was breathtaking. Steeply carved, craggy cliffs dropped into cobalt water; underwater kelp fields swayed in a sea of emerald; and the curvaceous Two Harbors and its sister Isthmus Cove beckoned.

A telephone call by Jesch to Kathleen McCartney running the airport’s DC-3 restaurant assured hungry pilots that they wouldn’t have to dig into their freeze-dried lasagna or powdered drink mix. Known for its excellent burgers, tri-tip, and buffalo tacos (the latter said to be imported from Ted Turner’s Montana ranch), the DC-3 offered an intimate setting for pilots to dine on an outdoor patio and relive the highlights of the Camarillo Fly-In. McCartney offered thirst-quenching lemonade and iced tea, much appreciated by pilots Jeff Meltzer and Gary Palmer, who flew over in Meltzer’s 180-horsepower Cessna Skyhawk. For those not immediately returning to the mainland, reasonably priced ice-cold adult beverages were available.

A grassy field on the south side of the taxiway is the perfect spot for airplane camping, camaraderie, and story-swapping with other pilots spending the night. Cessna 150 pilot Darrin Smith preferred to spend the night in the confines of his airplane cockpit with the passenger seat removed while others camped out. (Visitors who don’t want to camp can enjoy air conditioning, a casino, and shopping opportunities down the hill in Avalon.)

Brothers-in-law Albert Gersh and Steve Destler pitched a couple of tents next to their Cessna 172. Destler, a member of the Channel Islands Professional Photographers Association, whipped out his DSLR camera and hammered down as the sun descended behind Santa Barbara Island. Catalina is part of the Channel Islands chain, stretching 150 miles along the coast of California. Destler is a student pilot who runs a dental practice during the day and takes flying lessons in the evening. He recently accompanied his instructor to Catalina and was pleased that he had flown into the airfield twice in one week. “If everyone at the AOPA Fly-In could see this they would all be here right now,” said Gersh.

Cessna 180 Skywagon pilot Brian Ganz and his friend Jurgen Shultz packed a mountain bike into their aircraft to cover the half-mile from their camping spot to the DC-3 restaurant and gift shop’s bathrooms, which remain open after the facility closes. Their camping spot was close to a cliff that afforded a sweeping view of the Trans-Catalina Trail and the valley descending to the ocean far below. Portions of the cross-island trail are open to biking. The island was made from metamorphic rock, the result of tectonic activity after the Farallon Plate was absorbed by the North American and the Pacific plates, which forced Catalina into existence, explained naturalist Duncan Haunold of the Catalina Conservancy. The violent clash resulted in volcanoes that formed the Sierra Nevada and much of today’s California. The island itself harbors several distinctive species of flora and fauna including island scrub oak, mariposa lily, and tiny foxes that silently sneak into campsites looking for handouts.

Sometime in the past buffalo were brought in for a movie and they flourished among the hardscrabble rocks and rolling hills. Aviation’s Golden Era visitors piled into flying boats to visit Avalon, a petite village flanking the island’s eastern harbor. The Wrigley chewing gum family operated a DC-3 from the clifftop airstrip. Silent film star Charlie Chaplin’s brother ran an aviation operation from the island, and Hollywood’s Golden Age movie stars including Humphrey Bogart, John Wayne, and director Cecil. B. DeMille fished from the Avalon Tuna Club, the oldest fishing club in the United States, according to the Catalina Island Chamber of Commerce. The Chicago Cubs called the 22-mile-long island their spring training home for three decades, practicing in a Mediterranean climate moderated by ocean breezes and 267 days of sunshine.

After the Camarillo event, AOPA Fly-In volunteers Matthew Smith and Maoli Yamaguchi flew into Catalina in a rented Piper Archer to camp and relax. “Pilots are so welcoming, I just love it,” Yamaguchi confided as she settled into a good book while Smith hiked the 2.2-mile Airport Loop Trail past blooming yellow cactus flowers, spiked purple island thistle, and dainty orange wildflowers.

“After camping last night, hiking this morning, and experiencing the camaraderie between pilots—you can’t ask for anything more,” said Mullen as he prepared his Navion for the return trip home. 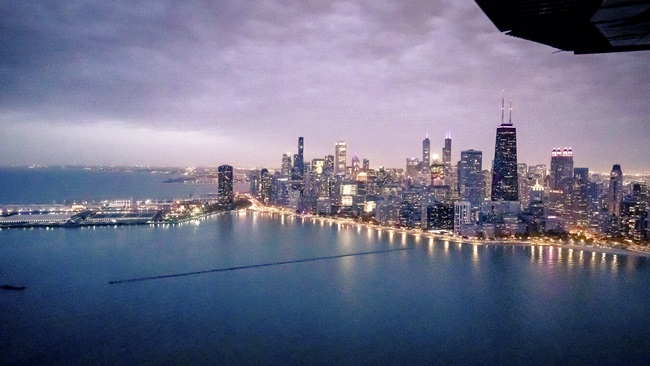