Get the app Get the app
Get the latest news on coronavirus impacts on general aviation, including what AOPA is doing to protect GA, event cancellations, advice for pilots to protect themselves, and more. Read More
Already a member? Please login below for an enhanced experience. Not a member? Join today
News & Videos Wheeler Army Airfield airspace redesigned

A new layout for the Class D and E airspace at Wheeler Army Airfield in Hawaii will go into effect on April 25, the date the 100th edition of the Hawaiian Islands Sectional Chart takes effect. 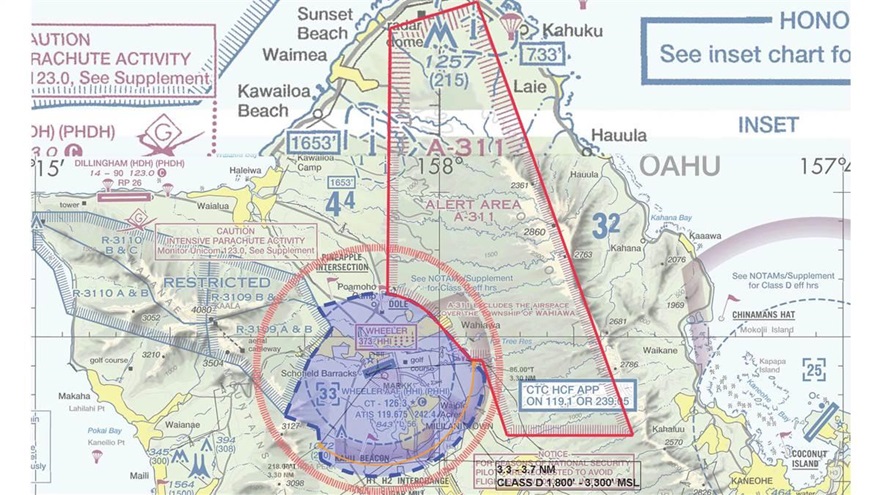 Pilots who fly in the airspace, which is located north of Honolulu on Oahu, should familiarize themselves with the increased lateral extent of the Class D airspace, and a new shelf of Class D airspace between 1,800 feet msl and 3,300 feet msl along much of the area’s southern boundary. The airspace update also creates surface-based Class E airspace where Class G airspace currently is in effect when Wheeler’s air traffic control tower is not operating.

In its notice of the airspace update, the FAA noted that it worked on it over the course of four years with “general aviation, commercial/tour industry and military users, and Wheeler ATCT and Honolulu Control Facility air traffic personnel.”

The agency acknowledged that the expansion of the Class D airspace area creates “the potential for increased radio contact between the ATCT and transiting traffic however, the boundary changes are necessary to ensure aircraft operating under instrument flight rules have adequate protection.”

The agency said it would “develop and conduct airspace briefings for VFR pilots, review and update the Chart Supplement graphic for transiting Wheeler AAF airspace, and review and update flight procedures for VFR arrivals to Honolulu International Airport.”

AOPA has long advocated for the FAA to make airspace changes effective simultaneously with the issue of new navigation charts and is satisfied with the process used at Wheeler, said Rune Duke, AOPA senior director of airspace, air traffic, and aviation security.

“As a result of the close collaboration of the FAA with the local military, general aviation, and air traffic controllers, the final airspace should meet everyone's needs,” he said.