Get the app Get the app
Get the latest news on coronavirus impacts on general aviation, including what AOPA is doing to protect GA, event cancellations, advice for pilots to protect themselves, and more. Read More
Already a member? Please login below for an enhanced experience. Not a member? Join today
News & Videos Baltimore firm takes on global drone mission to inspire youth

Baltimore-based Global Air Media has cast a nurturing net around children from Maryland to Kyrgyzstan in efforts to introduce drone technology to youngsters and spark future careers. 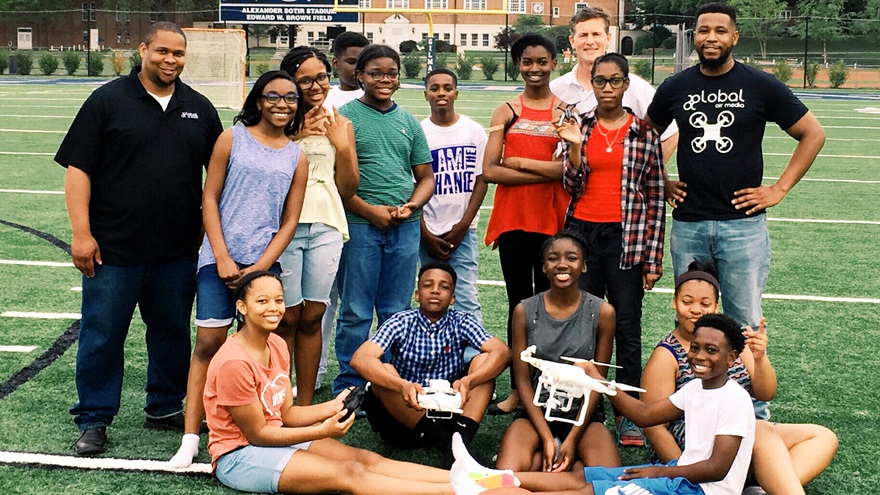 Their business model takes a unique turn with their creation of the nonprofit Global Air Drone Academy, offering youngsters a science, technology, engineering, and math-based learning approach to drone flight, rules, and safety, steering them toward twenty-first century job opportunities.

Umoh and Brown go back a ways. They played football together in high school. In college, they didn’t major in tech fields, and neither of them is the product of technology incubators. They formed their business in 2015, with little more than a passion for drones and some business knowledge gleaned from watching Umoh’s father run a contracting business. That combination led them to launch Global Air Media. Umoh, on a trip to Nigeria the same year, watched an octocopter shooting video at an event stadium, and it drove home for him the global future of drones. “That was my spark,” he recalled.

Back in Baltimore, Global Air Media drew the attention of the Kids Safe Zone, a protected, supervised area of West Baltimore where children could gather and socialize, shielded from the drugs and violence of the streets.

Umoh and Brown were asked to speak to the kids about drones, and with that, their first unofficial drone camp was born. Says Brown, “They scooped the kids off the street who otherwise would have been exposed to things that happen in that neighborhood and we provided the opportunity to actually learn about something. They loved it.”

Both men realized they were hooked on the learning potential they could offer.  It also became clear to them that there was a lot of drone education to be done in order for the industry to grow safely and put its best public foot forward. One year later in the summer of 2016, they officially created Global Air Drone Academy, and began offering drone camps on a larger scale.

The drone camps go far beyond just letting kids touch the sticks, learn the basics, and fly around for a few minutes. The academy curriculum now includes exposure to skills like soldering, assembly, ethics and safety training, coding and programming, and even the creation of entrepreneurial drone business plans. Camp attendees learn about counter-rotating propellers, the mechanics of drone flight, and the many positive business applications for drones.

“We’re teaching them skills they can use outside of drones," Umoh said. This is much bigger than drones at the end of the day. We’re building life skills.”

Safe flying is at the core of camp training. Before students ever touch a drone, they sign a safety/rules document that commits them to flying an unmanned aircraft seriously. “‘Safety first’ is a cliché” admits Umoh, “but it literally drives what we do. We tell them, ‘You are a pilot and the drone is your aircraft.’”

Brown adds, “A lot of the kids in our camps are too young to get their FAA license but we want to put them on the right track so that they will know the rules before they get there.”

The academy’s educational programming varies in length and content, from one-day sessions and after-school programs to three- to five-day camps. All preach the positive good drones can do. Global Air’s self-sourced custom drone kits are designed to be teaching machines, and are available for other camp operators to purchase. 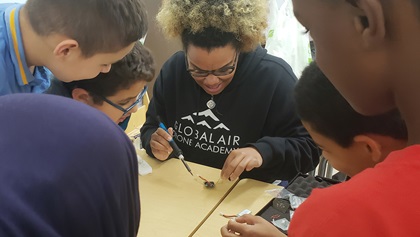 Through a partnership with the State Department’s U.S. Speaker Program, the academy extends its reach to other countries, often at the request of embassies seeking subject matter experts to present to foreign audiences. A bonus differentiator of the academy camps is that participants take their drones (typically a four-inch model) home with them at the end of the program, leaving with not only an opportunity to continue learning (and flying), but a great keepsake as well. Today, beyond the greater Baltimore area, camp and presentation locations have included Nigeria, the U.K., South Africa, Ethiopia, Kyrgyzstan, Turkmenistan, and the United Arab Emirates.

Umoh and Brown say feedback from kids and their parents is a huge reward and an indication that their efforts might prove more indelible than a typical summer camp experience.

“When we have parents reach out and tell us the kids are coming home interested in STEM, that’s the kicker for us,” Umoh. “I take personal pleasure in going out there and stimulating interest.”

Brown recalls a preteen girl who entered camp originally planning to become a nurse, but by camp’s end, engineering was the ticket. “Sure, she might change her mind, but just to have that kind of impact is highly rewarding.”

Global Air and its academy are helping more than just youngsters. As demand for their camps has increased (four were running simultaneously in one recent week), other pilots, STEM teachers, and experts are hired to help with classes so that Brown and Umoh can tend to Part 107 operations and grow the business.

“To fly drones and work with kids—I don’t know that we could offer a better service to our fellow drone pilots,” Umoh said.

Global Air is also looking for partners in other states to expand the academy domestically.

While they have no children of their own, Umoh and Brown have helped set a course for more than 5,000 kids who might never have been given the exposure to drones and associated careers. To learn more about Global Air Media and the Global Air Drone Academy, visit their websites. 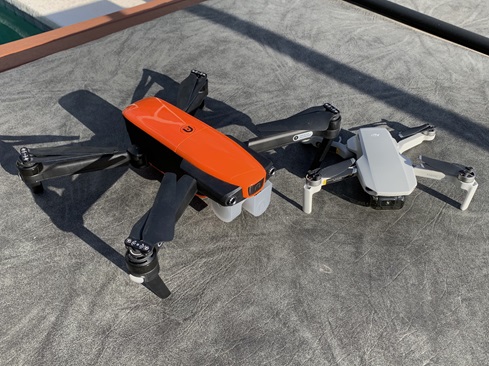