Get the app Get the app
Get the latest news on coronavirus impacts on general aviation, including what AOPA is doing to protect GA, event cancellations, advice for pilots to protect themselves, and more. Read More
Already a member? Please login below for an enhanced experience. Not a member? Join today
News & Videos Pilot Passport check-ins soar during Aviation Day

Pilots using the AOPA app’s Pilot Passport function to check in at airports were in for a surprise during National Aviation Day Aug. 19. 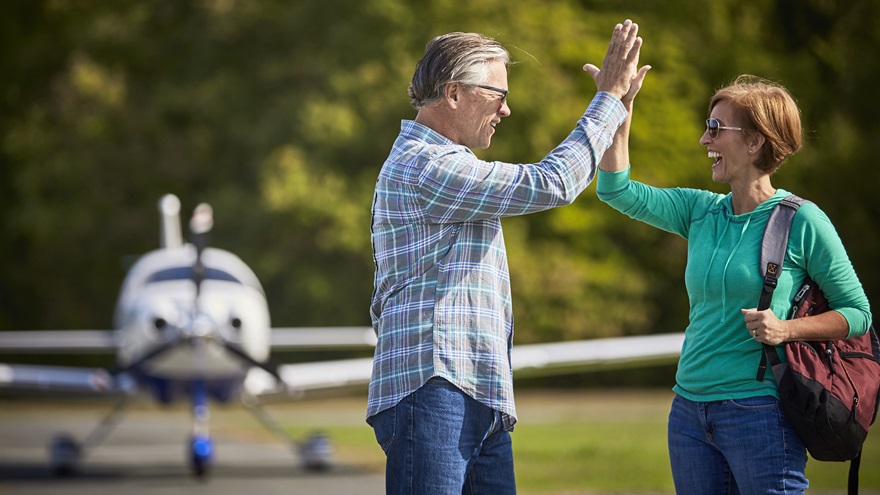 Their reward for flying on Orville Wright’s birthday was a hidden badge that coincided with a new single-day record of 566 pilot check-ins. In addition, 2,600 photos have been shared and viewed by fellow Pilot Passport users who accumulated 38,500 check-ins from all 50 states since the function was launched in April.

Congratulations to our latest challenge winners—Wendy Lessig, Chris Verbil, and Bill Tracy—for becoming the top three daily AOPA app Pilot Passport check-ins during August. They will each be rewarded with a $25 Hertz Rental certificate and a $25 AOPA Pilot Gear certificate. The September challenge is to check in during as many aviation events as possible. The top three AOPA app Pilot Passport users who collect the most event badges will be eligible to win $50 AOPA Pilot Gear prize packs.

The Pilot Passport function is designed to give pilots a little extra incentive to get out and enjoy the freedom of flight. Participants can earn badges and bragging rights for checking in at different types of airports; landing at various airports in their state; participating in aviation events; and sharing flying experiences by rating the airport, uploading a photo, and posting a comment on social media. For example, you may land at an airport that other pilots might find interesting, unusual, or challenging.

The secret to success is simple—make sure your smartphone or tablet is charged and available, visit as many aviation locations as you can, and remember to perform a check-in when it’s safe to do so. Recent additions to the program include island badges, historic landmark badges, and airport amenity badges—including a $100 hamburger badge for visiting airfields with restaurants.

Freeze frequently travels so it’s no wonder that he’s maintained a solid position in the top five for all-time check-ins. He’s quick to punch in after a flight to a general aviation airfield, during a commercial layover, or at his final destination on business flights.

“Try to focus on regional areas and on states where you can get maximum points,” he advised. “Platinum badges carry a lot of weight so if you go in and sweep a small state, it goes a long way.” He pointed out that Delaware is the only state that has no commercial airline service and its 12 airfields are ripe for GA travel. Freeze suggested that serious badge-baggers could visit all four Washington, D.C.-area airports because users earn a cool 10,000 points for completing all four check-ins.

He has also completed state aviation pilot passport programs for Maryland and Virginia and has earned leather flight jackets from each. However, Freeze was pleasantly surprised after he earned an Aviation Day Pilot Passport badge during an Aug. 19 event that he facilitated at Washington Dulles International Airport.

Freeze said the AOPA app’s Pilot Passport program was a good way to promote GA travel because it motivates pilots to fly somewhere new and then share it with other aviators. “Ultimately I think it’s a great enhancement to an already great product.”