Get the app Get the app
Already a member? Please login below for an enhanced experience. Not a member? Join today
News & Videos Delaware embraces Bellanca roots

Editor's note: This article was updated Aug. 2 to reflect the signing of the bill by Gov. John Carney.

A classic airplane designed by an immigrant from Italy and built in Delaware has been embraced by the state as its official historic aircraft after the idea was launched by members of the state’s aviation community. 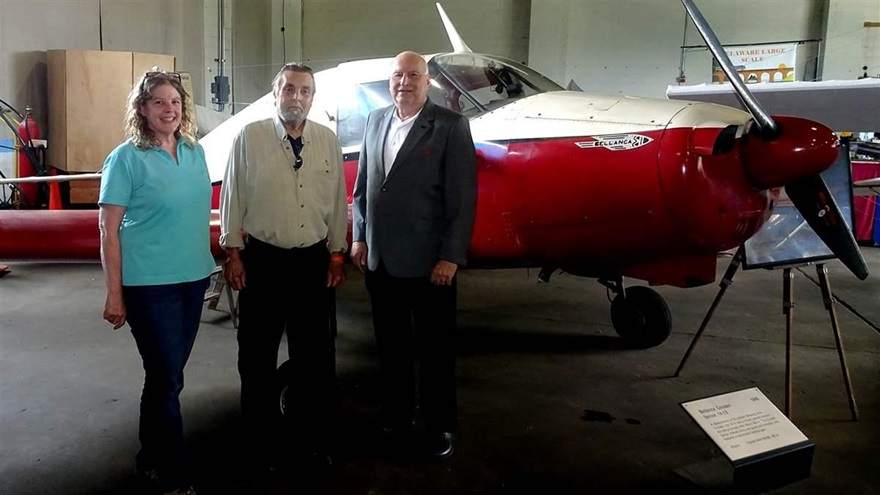 On July 30, Gov. John Carney signed a bill affording historic status to the Bellanca Cruisair, a fast and sightly single-engine taildragger that debuted in the 1930s and was manufactured in a series of models before and after World War II at a factory built by aircraft designer Giuseppe Bellanca in New Castle, Delaware.

The factory was built in 1928 and operated for 26 years, turning out more than 3,000 airplanes including Cruisairs and other Bellanca models, according to the Bellanca Airfield Museum, which is home to the Delaware Aviation Hall of Fame.

Distinctive for the endplates on its horizontal tail and a fuselage designed to contribute to aerodynamic lift, prewar Cruisairs started out with fixed gear and a radial engine but evolved toward retractable gear and horizontally opposed engines. The series was produced into the 1950s.

In 1957 the 260-horsepower Cruisemaster variant—by then being built in Minnesota—became a tricycle-geared airplane, and in 1964, the triple-tailed design was replaced by a single, swept vertical fin. Further modifications led to development of the Bellanca Viking.

Chinski arranged to have a video produced to pitch the idea to state legislators, and once the proposal was on the legislature’s calendar, the idea took off, winning support from state Sen. Stephanie L. Hansen (D-Dist. 10) who chairs the Senate Transportation Committee, and longtime aviation advocate Rep. Edward Osienski (D-Dist. 24) who chairs the House Transportation/Land Use and Infrastructure Committee.

By the time the bill passed the Senate in early June and cleared the House three weeks later, it had acquired 15 co-sponsors of the 62 total members of both bodies.

“That was a good thumbs-up, a good positive response,” Hansen said in a phone interview.

Chinski’s video chronicles how Giuseppe Bellanca, who arrived in New York City in 1910 and built a successful aircraft in 1913, moved his factory to Delaware at the invitation of H.B. duPont (a Delaware native).

Aircraft produced there became record-breakers and generally earned reputations for speed, reliability, and load-hauling capacity, it said. The presentation also emphasized the role the Bellanca factory played in supporting the aviation war effort of World War II, when several thousand people worked at the facility.

In the video’s introduction, Chinski—clad in a jacket with a logo displaying his AOPA membership—addresses lawmakers, noting that volunteers in the state work hard to keep Delaware’s aviation history alive and making an appeal: “So what we like to do is see if we can get as many of you legislators in a bipartisan way to put forward legislation to name the Bellanca Cruisair as the official historical aircraft of Delaware,” he said

Lambrecht is pleased that the honor bestowed on the Bellanca Cruisair will shine a spotlight on the state’s place in the history of aviation, but he adds that there’s much more to the story of how Bellanca made history in Delaware that may now get around.

Another first that occurred in “the First State”—it’s Delaware’s nickname for being first to ratify the Constitution in 1787—was Bellanca hiring Elinor Smith to be the company’s first woman test pilot.

In 1928 she had become at 16 “the youngest pilot to receive a license from the Federal Aviation Administration.” The license was signed by Orville Wright.

In 1930, Smith would be voted “best female pilot” by a peer group that included Amelia Earhart. Ever the historian, Lambrecht adds that in 1934, Smith became the first woman to appear on a Wheaties cereal box.

And it may surprise you that it was a Bellanca aircraft called Columbia that Charles Lindbergh originally sought out for his 1927 crossing of the Atlantic Ocean. However, the deal fell through.