Get the app Get the app
Get the latest news on coronavirus impacts on general aviation, including what AOPA is doing to protect GA, event cancellations, advice for pilots to protect themselves, and more. Read More
Already a member? Please login below for an enhanced experience. Not a member? Join today
News & Videos Mutual aid, with drones

Firefighters and police from across the state of New York converged on a decommissioned airport turned training center on October 29 to spend the day practicing with drones.

More than 100 firefighters and law enforcement officers brought dozens of drones to the State Preparedness Training Center in Oriskany, New York, a decommissioned airport repurposed about a decade ago into state-of-the-art facility to train law enforcement, military, and homeland security personnel. (The county airport now occupies a former U.S. Air Force base about 5 miles to the north.) Northeast UAS Airspace Integration Research, a nonprofit organization better known as NUAIR that is at the center of New York’s effort to position the state at the forefront of UAS technology development, organized the event in collaboration with public safety drone pilots including Albany County Chief Deputy Sheriff Leon “Lee” Bormann, who served as air boss for the daylong training session on October 29.

“This is an awesome facility,” Bormann enthused during the morning briefing, launching into a description of the four training scenarios set up for the police and fire drone pilots. One was indoors, the other three were scattered along the former Runway 15/33. Firefighters and police from agencies in New York City, Albany, Washington County, and Syracuse, and the New York State Police, were among the veteran drone pilots who put their practical experience to use devising realistic training evolutions: a concrete rubble pile to search (it’s a permanent fixture in the middle of the decommissioned runway); a collection of modular buildings and vehicles in a “disaster city” setup; search-and-rescue exercises at the north end of the 6,000-foot runway (where drone pilots got to practice their controlled airspace authorization procedures, since this station was just inside Class D airspace of Griffiss International Airport, home of the state UAS test facility run by NUAIR); and an indoor tactical exercise designed to simulate a drone-aided SWAT response. 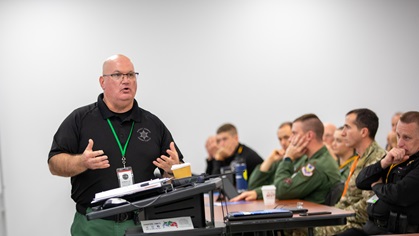 “I don’t think we could dream or pick a better spot to run public safety type scenarios,” Bormann said.

Public safety agencies have been among the most enthusiastic adopters of unmanned aircraft technology, but many have had to learn the fine points by trial and error. The goal on this day was to leverage everyone’s collective experience and spread that knowledge organically.

“We have never done an event like this before, but we plan on doing more of these events,” said David Guido, NUAIR’s chief of industry engagement. While Part 107 training covers the basics and focuses primarily on airspace legalities and other rules, there is no practical training required by the FAA for remote pilot certification. That poses a challenge, particularly for small departments building drone programs from scratch. “We want to help enable that, and make sure they’re doing things safely and doing things right.”

The runway was built with steel reinforcement that can disrupt a drone’s internal compass calibration, so an FDNY drone pilot demonstrated the technique: Get the drone a few feet away from that ferrous metal, and calibrate it by holding the aircraft at arm’s length and turning it with the pilot at the center of the circle, not the other way around. Keeping the drone in the center of the circle and walking around it is how the procedure is depicted in the manual, but it’s faster, easier, and effective to do it the other way. At the four scenario stations, there were many opportunities to share pro tips like that. 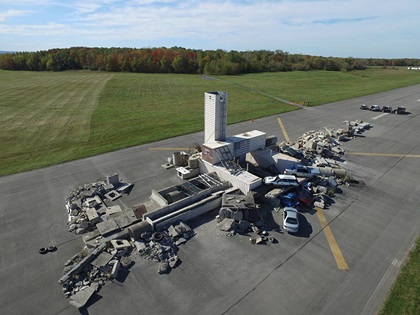 With experienced hands watching over their shoulders, firefighters and police practiced flying drones using thermal imaging and visible light sensors, and learning skills and techniques that maximize the flow of critical information that informs key decisions. Does the barricaded suspect have a gun? Where are the victims? What, exactly, is burning? These are questions that drones can help answer while minimizing the physical hazards to first responders across a range of missions.

NUAIR, part of a program dubbed UAS Central, plans to help launch a more formal program in 2020 dubbed NYFLY, a collaboration of operators, hardware and software manufacturers, and public agencies to solve problems and enhance the effectiveness of drones on public safety missions.