Get the app Get the app
Get the latest news on coronavirus impacts on general aviation, including what AOPA is doing to protect GA, event cancellations, advice for pilots to protect themselves, and more. Read More
Already a member? Please login below for an enhanced experience. Not a member? Join today
News & Videos AOPA WINNER OF 2019 BREWER TROPHY

The National Aeronautic Association Selects AOPA's You Can Fly Program as Recipient of the 2019 Frank G. Brewer Trophy

According to an NAA press release, AOPA's You Can Fly program was recognized"...for fostering an appreciation of general aviation flying by working to make it more accessible and affordable to all."

Today, the need for pilots, engineers, scientists, and technicians continues to grow. You Can Fly's initiatives are focused on welcoming new and lapsed pilots from all different backgrounds and shows them it is possible to be successful in the many opportunities available throughout the aviation industry. 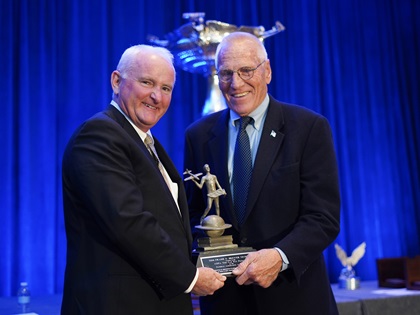 "It is truly an honor to accept the Brewer Trophy on behalf of AOPA and the You Can Fly team," said Mark Baker, AOPA's President and CEO. "I'm very proud of how far You Can Fly has come in just a few short years, and I know we are just getting started," Baker continued. "Thank you to the NAA Brewer Trophy selection committee for recognizing the hard work and effort You Can Fly is putting into growing and protecting the general aviation pilot community."

In the past four years, AOPA has worked hard to grow its four main initiatives and has no plans of slowing down. You Can Fly's multi-faceted program that is comprised of the Flight Training; Flying Clubs; and Rusty Pilots initiatives, along with its nationally recognized high school aviation science, technology, engineering, and math (STEM) curriculum.

Since its inception, You Can Fly has recognized hundreds of industry-leading flight instructors and flight schools through its 'Flight Training Experience Awards,' helped create more than 134 new flying clubs, welcomed back more than 7,600 rusty pilots, and exposed more than 8,000 high school students to its aviation courses year-to-date, with more than 5,000 students currently enrolled this school year.

"You Can Fly is changing the face of aviation by breaking through barriers and welcoming students from all backgrounds and demographics," said Baker. "If you look around at the thousands of high schoolers eager to learn about careers in aerospace, it's easy to see just how this program has made a difference, not just in the industry, but with each new pilot who is setting the course for their future. I am so proud of what we've accomplished with the support of our donors, and I'm honored that the National Aeronautic Association is recognizing the impact You Can Fly has had."

In an earlier press release announcing AOPA's You Can Fly program as the Brewer Trophy Winner, NAA President, Greg Principato stated, "The National Aeronautic Association is looking forward to presenting the 2019 Brewer Trophy to the Aircraft Owners and Pilots Association for their terrific You Can Fly Program. At a time when everyone is looking for ways to attract young people to learn about aviation, AOPA is out there actually doing it. The fact that so many of the students in the program are female and so many are from underserved populations was an important factor in this selection. We cannot overlook anyone in building a better future for aviation, and the AOPA program will help ensure we don't," Principato continued.