Get the app Get the app
Get the latest news on coronavirus impacts on general aviation, including what AOPA is doing to protect GA, event cancellations, advice for pilots to protect themselves, and more. Read More
Already a member? Please login below for an enhanced experience. Not a member? Join today
News & Media So much in shore: A storied past, family attractions, outdoor activities

After a quick how-to with the electric bicycles, Zipp E-Bikes owner Seth Leo pointed us in the direction of East Beach and told us to go see Galveston Island.

In a half day of cruising on the bikes, we covered a lot of ground on the island’s streets and took in a few of its 32 miles of sandy beaches, which were easily conquered between each bike’s fat tires and its throttle lending a boost when needed.

We rode through the easternmost beach park, known for hosting festivals including a sandcastle competition involving professional architects each summer, and saw a portion of the East End Lagoon Nature Preserve, a birder's paradise with nearly 700 acres of undeveloped land.

Then we hopped on Seawall Boulevard to explore a National Historic Landmark in the East End Historic District: the 1892 Bishop’s Palace. Galveston has one of the largest and most-preserved concentrations of Victorian architecture in the country, and this three-story castle-like structure might be the city’s best example. The American Institute of Architects says it is one of the 100 most important buildings in the United States. See for yourself on a self-guided tour. 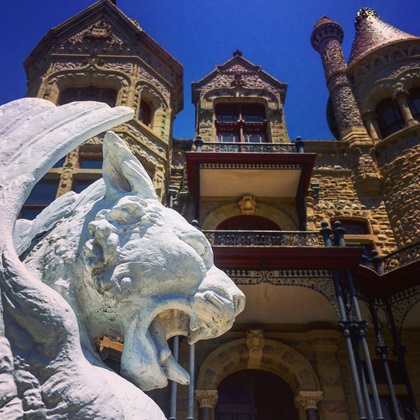 We explored residential streets on our way to The Bryan Museum, opened in 2015 with 70,000 items, one of the largest collections of original Texas and American West artifacts, documents, and art.

It is in a renovated 1902 Renaissance Revival building that was once an orphanage, and we happened to be there on a Thursday, when Galveston’s outdoor farmers market sets up on museum grounds.

We stopped in front of the 108-year-old Hotel Galvez and Spa, the beachfront hotel where Frank Sinatra, Gen. Douglas MacArthur, and other celebrities have stayed. Then we rode along the seawall to Galveston Island Historic Pleasure Pier. The pier has been a recreational destination since the 1940s but has twice been destroyed by hurricanes. It was most recently rebuilt in 2012 and offers dining, entertainment, rides, and games on a 1,130-foot pier jutting into the Gulf of Mexico.

We returned the bikes to the shop, which is right across the street from our base during our stay: The Tremont House, a sister property to Hotel Galvez and Harbor House Hotel and Marina, the island’s only hotel overlooking the port. 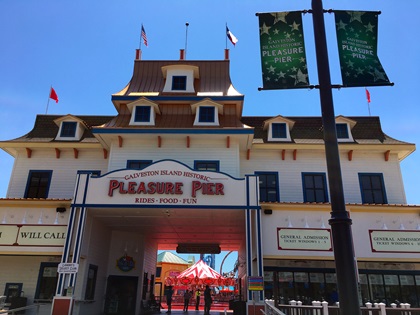 The Tremont is a boutique hotel with 119 rooms in a converted 1879 dry goods warehouse, and it has luxury extended-stay suites within The Quarters at The Tremont House. The hotel’s address in The Strand National Historic Landmark District and the Downtown Cultural Arts District was ideal. We explored the rest of downtown on foot, from gift and candy shops to galleries and restaurants.

You’ll want to devote at least a day to explore the attractions along Galveston Harbor. We started at Pier 21 with the Texas Seaport Museum and the 1877 Tall Ship Elissa. Elissa wasn’t open for touring when we visited because it had just returned from sailing (it is one of three ships of its kind in the world that still actively sail), but we spent time exploring the museum’s exhibits on seaborne commerce and Galveston’s role as the second-busiest immigration port in U.S. history.

You can learn more about the busy port and Galveston Bay on an hourlong harbor tour and dolphin watch on Texas Seaport Museum’s 50-foot twin-engine Seagull II. Other operations at Pier 21 offer jet boat thrill rides and dolphin tours. 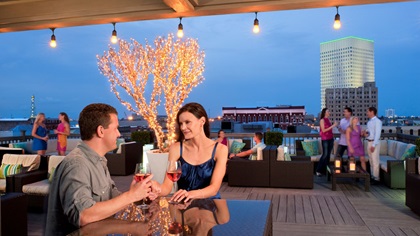 Pier 21 Theater shows three documentaries daily covering pirates, immigrants, and The Great Storm of 1900, a hurricane that killed 6,000 to 8,000 residents. It is considered the deadliest natural disaster in the country’s history.

At Pier 20, Ocean Star Offshore Drilling Rig Museum gives you access to a retired jack-up drilling rig. There are three floors of indoor exhibits plus displays on outdoor decks, covering the offshore oil and gas production process and what it is like to work on the rig, including using a helicopter as transportation.

One of the best views of the activity on the harbor—with the fourth busiest cruise terminal in the country—is flying over the long, narrow barrier island on the Texas Gulf Coast during your arrival and departure.

Galveston Island is about 50 miles from Houston, the nearest commercial airline service, but Galveston Island Scholes International Airport was recognized the state’s 2018 General Aviation Airport of the Year by the Texas Department of Transportation. It has two 6,000-foot runways and ramp space, with Island Jet Center operating the FBO. 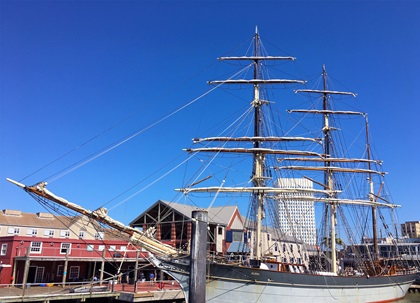 If you’ve visited before and remember an aviation museum at the field, the Lone Star Flight Museum relocated to Houston’s Ellington Airport after nearly 27 years to avoid continued hurricane damage. The museum flew its airworthy airplanes to safety before Hurricane Ike hit in 2008, but remaining aircraft, static displays, and structures were heavily damaged.

The airport is surrounded by popular island attractions, including Schlitterbahn Water Park and the Moody Gardens complex, a collection of experiences ranging from three pyramids housing an aquarium, a rainforest, and the Discovery Museum with 3D/4D theaters to a paddle-wheel boat ride and a links-style, par-72 golf course with bayside views.

The 10-story Rainforest Pyramid highlights more than 1,000 species of plants and animals from the rainforests of Asia, Africa, and the Americas. It is accredited by the Association of Zoos and Aquariums, as is the blue Aquarium Pyramid, which finished a $37 million renovation in 2017. The aquarium has 1.5 million gallons of water in five ocean environments, including a multilevel 30,000-gallon replica Gulf of Mexico oil rig. You’ll also see seals, sea lions, sharks, and penguins.

Galveston Island’s beaches might get your attention—and there’s plenty of time to enjoy them during the long summers that stretch May through September—but consider the island a year-round getaway with plenty to do in the water or on shore. 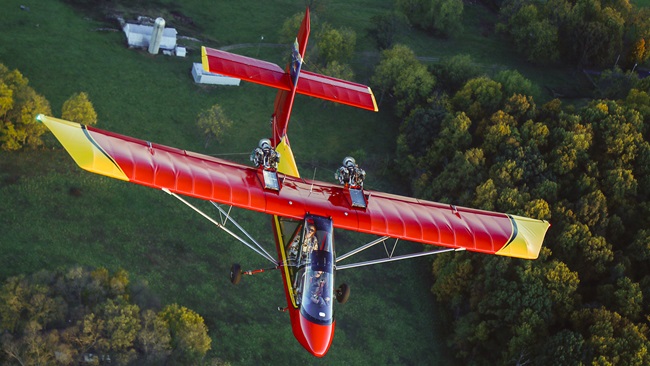