Get the app Get the app
Get the latest news on coronavirus impacts on general aviation, including what AOPA is doing to protect GA, event cancellations, advice for pilots to protect themselves, and more. Read More
Already a member? Please login below for an enhanced experience. Not a member? Join today
News & Videos Going native for AOPA Fly-In camping fun

A 95-degree late summer Tennessee heat wave was expected, and I packed a tent. The challenges of camping at an AOPA Fly-In could be conquered.

I know what you’re thinking, “No motel, no rental car, no restaurants—no way!”

It was right in the heart of the action, I do say.

I hatched a plan to ferry a pristine yellow Piper Super Cub outfitted with amphibious floats from Maryland to Tennessee so its owner could be in position for the popular short takeoff and landing demonstration during the AOPA Tullahoma Fly-In Sept. 13 and 14.

The plan was to keep it simple: I would forgo rental cars, restaurants, and showers (if need be) to get where that airplane needed to be, and then I’d get a chance to sit back, relax, take in the sights and sounds, meet people, make new friends, and learn from the ground cloth up what made AOPA's regional road show popular with 123,000 attendees over 27 shows since 2014.

STOL wrangler Jimmy Gist called to advise I’d be landing on the short grass runway set up for the demonstration and that the air boss would be looking for me to arrive before Tullahoma Regional Airport/William Northern Field closed for the night at 6:30 p.m. 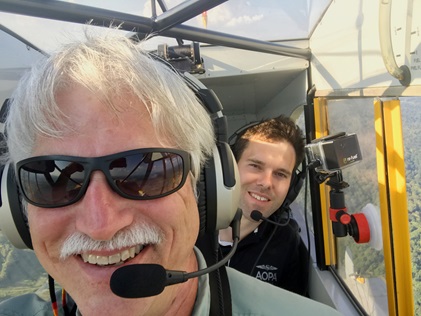 I planned for a southern Virginia fuel stop about halfway along the 524-nautical-mile flight, and gathered up flying buddy and AOPA Live® television producer Josh Cochran to share the experience from the back seat. (Sorry Josh!)

We crossed the Appalachian Mountains through West Virginia and then turned southwest to a fuel stop at Lonesome Pine Airport in Wise, Virginia. The line crew spilled onto the ramp to welcome us, and then showed us a small but informative museum about local hero Francis Gary Powers, the U.S. U-2 pilot shot down by the Soviet Union in 1960.

Back on our way, the first thing we noticed was the terrain looked less hospitable at 4,500 feet than it did from our original 8,500 feet. Taking a closer look at potential emergency landing options on the rivers, lakes, and streams did not tempt us.

The air boss cleared me for a straight-in approach to the grass STOL strip at Tullahoma, and I was pleasantly surprised with compliments on my technique. So far, so good.

After we tied down, we made some sunset images and grabbed our camping gear. Other campers were well ahead of us, but Cochran and I successfully completed our version of speed camping to set up before darkness.

The location was ideal for a quick shuttle bus ride to the pancake breakfast and show center. I was near the front of the line when I heard the unmistakable drawl of “Tu-lis” from my good friend Bryan Eastman, of Atlanta. I had joined Eastman many times as his instrument safety pilot in a Piper Arrow when we flew together out of DeKalb-Peachtree Airport. He’s since graduated to a Beechcraft Bonanza A36 and the right seat of a jet on a few occasions.

After breakfast I attended paid seminars and free presentations, and toured the static display. Atlanta pilot Joel Levine, a former Beechcraft Musketeer owner, flagged me down and we caught up on everything happening at his home field and with Levine’s Experimental Aircraft Association Chapter 690.

I spied Cirrus Aircraft business development specialist Gary Black holding court near an SF50 Vision Jet and was treated to a warm welcome. Black and I paddled together through whitewater rapids along Colorado and Utah’s Green River in 2018. I nearly hung our two-person raft on a huge rock and capsized during a journey for military veterans organized by a fellow Cirrus pilot, but somehow we escaped unscathed. It was great seeing friends and renewing acquaintances—a strong point at any fly-in. 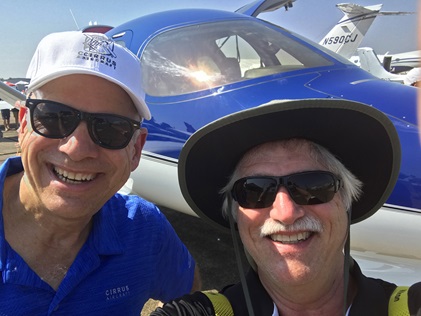 Before long the sun began to set above the STOL aircraft, signaling the Flightline Cookout and an evening of aviation entertainment as temperatures began to cool. The Bell Brothers played in front of a Beechcraft Model 18 well into the evening, and then it was off to bed under a Friday the thirteenth full moon. I didn’t even need a flashlight.

The rumble of aircraft engines over the campsite signaled the next morning’s arrival. Another quick shuttle ride landed me at the front of the breakfast line, and then it was off to experience additional seminars and attend the Pilot Town Hall.

Sadly, the end of a pleasant camping and flying adventure was at hand. Cochran wisely chose to return to Frederick Municipal Airport in a Van’s Aircraft RV–10 with AOPA Pilot Editor at Large Dave Hirschman.

Calm winds, blue sky, and the payload reduction boosted my confidence and I couldn’t resist a quick Super Cub seaplane splash into Norris Lake on my way north through Tennessee. New friends again welcomed me at Lonesome Pine Airport where I refueled. Strangely, a familiar British voice filtered through the traffic advisory frequency—it was AOPA’s Steve Bateman headed south through Virginia in a Cessna 172 to collect stamps for the state’s aviation passport program.

Tailwinds followed me home and I scooted over the mountains before the sun began to dip to the west behind me, with Frederick Municipal Airport in sight.