Get the app Get the app
Already a member? Please login below for an enhanced experience. Not a member? Join today
News & Media Flying into action

When the volunteer pilot groups that usually provide free medical transportation to patients who live far from their doctors made the tough call to stop flying during the coronavirus pandemic, they knew what task to take on next: vanquishing the virus itself. 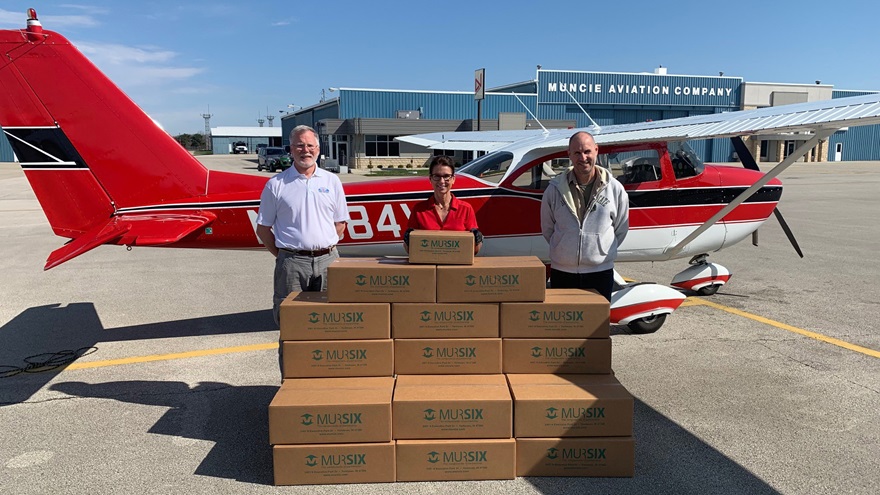 Their rosters of thousands of volunteers, and more applying daily to fly their own aircraft, at their own expense, to help defeat the COVID-19 disease, represented a powerful potential resource. Meanwhile, many hospitals’ supplies of masks, face shields, gowns, and other protective items were depleting, especially in rural areas.

It was unthinkable that such nimble resources might go undeployed in a national emergency. Instead, public-benefit aviation organizations like Angel Flight East, Angel Flight West, the Air Care Alliance, and others are focusing on getting desperately needed equipment into the hands of health care providers—a process that sometimes means making those producing the medical equipment, and those who will use it, aware of general aviation’s fast-action capabilities.

One volunteer pilot who saw that big picture coming into focus as a result of a single flight assignment was AOPA member Ed Loxterkamp, who on April 5 flew with Todd Harris in Harris’s Cessna 172 to deliver boxes of face shields manufactured by Yorktown, Indiana-based Mursix, an industrial component manufacturer, to the Massachusetts Emergency Management Agency at Laurence G. Hanscom Field in Bedford, Massachusetts. The flight, which originated at Putnam County Airport, in Ottawa, Ohio, was coordinated by Angel Flight East, a volunteer pilot organization based in Blue Bell, Pennsylvania.

Mursix announced in March that it was “switching gears” to join the fight against the pandemic by making personal protective equipment (PPE), vowing to reach a production goal of 100,000 units a week.

Along with volunteer pilots and the organizations that send them aloft on missions of hope, aviation companies and educational institutions are also pitching in during the coronavirus pandemic.
Aircraft manufacturer Tecnam, of Padua, Italy, announced plans to produce face shields in response to “the lack of personal protective equipment (PPE) currently in the market, particularly during Italy’s Phase 2 lockdown, where certain activities are permitted only when using adequate protective devices.”
Cirrus Aircraft announced a multi-pronged effort launched with donations of gloves, hand sanitizer, and lab gear delivered to hospitals in Duluth, Minnesota, “and we’re actively analyzing our future orders for additional donation opportunities,” the company said on its website. Cirrus followed up by producing 31,500 face shields for the local medical community, using materials provided by Frost River Trading. It was also developing a prototype of a high-demand device to “provide positive airflow through a filter to a hood that protects healthcare workers from contaminated air.”
Embry-Riddle Aeronautical University announced that teams of students on its campuses in Daytona Beach, Florida, and Prescott, Arizona, were fabricating high-quality masks and face shields to help protect health care workers. The university provided the materials.
Fourth-year student Matthew Glass said making the masks gives him “a mission and a sense of purpose” amid the pandemic. “With a project like this, you don't get to necessarily see the effects of your actions, but you know that you are saving lives,” he said.

“The company did not imagine that it would be developing prototype PPE face shields to protect the nation's front-line healthcare providers,” said Mursix, whose PPE project was championed by Susan Murray Carlock, vice president of business development, who is now spearheading outreach to hospitals. Mursix had prior experience in the medical sector, having manufactured components for respiratory-assist devices, vital sign monitoring devices, and hospital beds, she noted.

Loxterkamp, retired from the military and the Department of Defense with a background in intelligence and engineering, has been flying powered aircraft since 2009, and flew gliders long before that.

In a phone interview, he said he realized from his professional experience that an urgent need remained to “connect the dots” between PPE consumers and suppliers—many of them new entrants into PPE production—and that aviation groups were poised to bridge the gap, as his flight demonstrated.

“That’s just one company,” he said. “Other people are adapting to the situation and trying to contribute. How can we provide a mechanism?”

Ellen Williams, executive director of Angel Flight East, said she has noted an uptick in applications from would-be pilot volunteers during the pandemic. She credited Loxterkamp with pitching the idea of delivering medical supplies, and with making a “cold call” to Mursix that forged the connection.

“And so here we are, flying 22,000 face shields a day. The pilot response has been extraordinary,” she said.

Loxterkamp’s two-fuel-stop flight from Muncie, Indiana, to Bedford was joined by other aircraft bringing in materials to Bedford, where state police and National Guard members waited to take the supplies to a state warehouse, and where news media coverage promoted awareness of the GA response.

Coming together in a crisis

A different logistical challenge arises, however, if mission distances exceed the capabilities of available aircraft, or if the volunteer-pilot organization can’t fulfill a flight request when it comes in.

“What if we create a central point of contact on the back end and share those requests,” Olson said. With volunteer pilots in good supply, it is on the outreach side of the logistical puzzle “where we’re not as strong.”

Meanwhile, opportunities tailor-made for GA pop up every day, he said, noting that while a dozen boxes of PPE that are urgently needed at a rural hospital might not result in a delivery truck making the trip to an isolated area, a GA aircraft could handle the job.

Such a flight made news earlier in April when Angel Flight West coordinated a mission from Denver’s Centennial Airport to deliver face shields made by the Colorado-based group Make4Covid to Melissa Memorial Hospital in Holyoke, population approximately 2,200, about 175 miles east of Denver.

Changing strategic direction to meet the logistical needs of the coronavirus crisis is continuing at Angel Flight West after the nonprofit’s board of directors voted to temporarily suspend volunteer-flown patient flights (as did Angel Flight East across the 14 states it serves, as of March 24).

Angel Flight West, which each year recognizes those involved in public benefit flying through its Endeavor Awards, pivoted from plans to hold an Endeavor 2020 virtual event to mounting an online campaign “seeking a rapid-response for emergency assistance funds.”

Both Angel Flight organizations were planning to join discussions with the Air Care Alliance, a support organization for public benefit aviation, and other groups, on ways to expand their outreach and logistical efficiency. The Air Care Alliance is also encouraging volunteer pilots to review a white paper on the “best ways to mitigate risk in GA for both human and cargo transport.”

Loxterkamp said he is gratified to see efforts expanding as volunteer pilot organizations, charities, and private companies step outside customary boundaries to confront the coronavirus together.

“I just wanted to get the word out that everybody has a piece of it, but somebody has to look at the overall systems,” he said.

Dan Namowitz has been writing for AOPA in a variety of capacities since 1991. He has been a flight instructor since 1990 and is a 35-year AOPA member.
Go to Dan Namowitz's Profile
Topics: People, Public Benefit Flying