Pilots flying over and between the peaks of the Colorado Rockies have new insight on current conditions, thanks to 52 weather cameras now active at 13 automated weather stations. 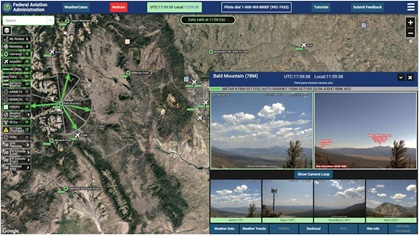 The Colorado Division of Aeronautics and the FAA jointly announced activation of the cameras August 4 for immediate use (it appeared to be a rather nice day to fly, as it happened). The cameras were integrated into a suite of weather products hosted by the FAA, a single page from which METARs, terminal aerodrome forecasts, and pilot weather reports are depicted in graphical form with hyperlinked symbols that pop up printed products when clicked. Users can also draw flight routes and save them for future reference; and notams are a click away.

Colorado is the first of the Lower 48 states to offer pilots real-time visualization of current information. This rather powerful package arrived by way of Alaska, where pilots who ply the remote and rugged terrain of the largest and northernmost state in the union have long sung the praises of the weather cameras installed by the hundreds in recent years. (Some may still use an older and less feature-rich website to access those current views of Alaska, and probably want to check out the added features on the newer site.)

AOPA Alaska Regional Manager Tom George, one of many on the staff who have worked over the years to support the development of the current network of 230 camera sites, celebrated Colorado’s achievement:

“The weather cameras in Alaska have proved to be a powerful tool for pilots to assess weather for flight planning,” George said. “Being able to see the weather at points along a VFR route, especially in mountain passes, helps pilots make a more informed go/no go decision, where no other weather information is available. When they are co-located with an AWOS, they help validate reports and show pilots approaching weather not yet detected by the automated observations.”

David Ulane, director of aeronautics for the Colorado Department of Transportation (and a former AOPA regional manager), said his agency is “excited to have had this opportunity to partner with the FAA in yet another joint effort to enhance aviation safety.”

The weather camera project is the third such collaboration; the FAA has implemented state-funded safety improvements including a Wide Area Multilateration System, and an ongoing remote tower project at Northern Colorado Regional Airport. The state funded the $226,000 camera project, and the FAA worked with the state government to install and configure four cameras at each of 13 selected AWOS locations.

“David Ulane and the team at Colorado Department of Transportation, Division of Aeronautics have leaned forward to bring a tremendous safety asset to the aviation community in Colorado,” said AOPA Northwest Mountain Regional Manager Josh Pruzek. “This collaborative effort will benefit all pilots flying within the region and serves as an excellent example of a very practical project with immediate benefits to aviators which could be replicated in other mountainous states to enhance general aviation safety.”

George joined in congratulating the newest members of the weather camera club.

“Kudos to the Colorado Division of Aeronautics for partnering with the FAA to make this happen,” George said.