Get the app Get the app
Get the latest news on coronavirus impacts on general aviation, including what AOPA is doing to protect GA, event cancellations, advice for pilots to protect themselves, and more. Read More
Already a member? Please login below for an enhanced experience. Not a member? Join today
News & Videos EPA proposes aircraft emissions regulation 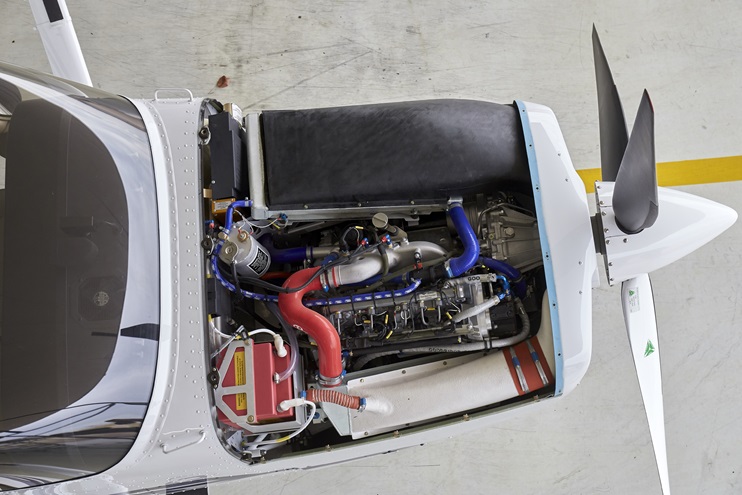 While Textron Aviation paused production of the Jet A-powered Skyhawk JT-A in 2018, the Continental CD-155 conversion remains available, and the JT-A may return to production when biofuel prices decrease and availability increases. Photo by Mike Fizer.

Internal combustion will remain aviation’s primary power source for several years, though electric alternatives show promise to prove practical for many missions, including pilot training and local air taxi service, in the relatively near term. Government and industry are working to scale electric propulsion for general aviation, and for service in regional airlines. Both private companies and national aerospace agencies including NASA and its German counterpart, DLR, have been designing and testing hybrid-electric propulsion concepts for several years. Electrifying local and regional air transport within a decade or two appears to be achievable.

Meanwhile, the U.S. Environmental Protection Agency issued a notice of proposed rulemaking in July that would limit allowable greenhouse gas emissions from many turbine aircraft. The rulemaking was triggered by a provision of the Clean Air Act, as amended in 2016: The EPA found that jet engines emit high concentrations of six key greenhouse gases that are associated with climate change, including carbon dioxide, methane, nitrous oxide, and various fluorocarbons. The EPA’s proposed rule primarily affects transport aircraft: The EPA determined that aircraft subject to the proposed regulation, with a maximum takeoff weight of at least 12,566 pounds, account for 10 percent of all greenhouse gas emissions from global transportation sources, and 3 percent of the worldwide total.

AOPA supports the EPA-FAA collaboration to develop the proposed rule, which would affect some aircraft in the GA fleet. The proposed rule that resulted balances environmental concerns with the economic burden placed on aviation (broadly) and GA in particular, where some aircraft will be affected. The EPA lists examples, including the Cessna Citation CJ3+, that would be subject to new emissions standards. The existing fleet, however, would be exempt from the proposed rule.

AOPA has worked with government and industry for years to improve propulsion technology. More efficient powerplants are more economical to operate, as well as producing less pollution, and aviation has come a long way since the dawn of the Jet Age.

Turbine aircraft have also come a long way, and so has the fuel: Biofuels derived from sustainable sources have powered transatlantic flights, though the fuel remains relatively expensive to produce, and is not yet available in quantities that would support all uses.

That will likely change before the proposed EPA limits take effect, and biofuel alternatives to Jet A may also power a growing number of piston aircraft in the future. Many AOPA members have taken sustainability to heart, including Ross McCurdy, who flew a diesel-converted Cessna 182 across the country in 2012 with a 50-50 blend of Jet A and biofuel. Another AOPA member’s passion for environmental science and awareness propelled him around the world in a light sport aircraft.

AOPA Pilot recently featured a broad look at emerging electric aircraft, as well as supersonic concepts and other designs that will dramatically change the fleet. Meanwhile, piston aircraft remain the mainstay of the GA fleet and reducing lead pollution caused by avgas combustion has been a high priority for the industry for many years. The Piston Aviation Fuels Initiative was launched in 2012 with the goal of testing and approving a drop-in replacement for avgas that could serve the entire fleet of 170,000 piston aircraft. The FAA continues to test and evaluate candidate fuels.

AOPA has been deeply involved in PAFI from the beginning. As a member of the PAFI Steering Group, we support the goal of approving a high-octane, unleaded alternative to avgas that will be “environmentally safer than leaded fuels, yet as operationally safe as leaded fuels in the current fleet of piston engine aircraft.”

GA has made some progress reducing lead emissions in the meantime. Swift Fuels sells supplemental type certificates for many aircraft that can safely use Swift’s unleaded aviation gasoline. Swift Fuels, based in Indiana, previously participated in PAFI, but opted to pursue certification of its fuel on its own in 2018. Swift Fuels has been working with the FAA since to test and certify its UL94 and reduced the price of the STC to $100 for each piston aircraft in March.

PAFI continues to focus on authorizing a fleetwide lead-free aviation fuel that could be used without separate certifications for individual aircraft.

Urban Air Mobility, a much-used term more recently shifted to Advanced Air Mobility to reflect missions that may extend well beyond rooftop-to-rooftop air taxi service in cities, is mainly about creating a new generation of electric aircraft with short-field or vertical-takeoff-and-landing capability. AOPA has supported the development of this concept in several respects, dispatching staff to participate in events such as the Uber Elevate summits, and other collaborative conversations between government and industry.

New technologies will be made possible in part by years of hard work put into the aircraft certification reform implemented in 2017, reflecting a shift to performance-based standards for aircraft certification that brought immediate benefits to pilots and the public alike. AOPA was also heavily involved in that effort, and fully supportive in part because it enables more cost-effective deployment of new technologies that enhance safety and efficiency. This shift in approach also helped pave the way for more cost-effective and efficient aircraft.

Bye Aerospace in Colorado is making progress toward being the first to certify an electric aircraft in the United States; other companies, such as ZeroAvia, are working to bring hydrogen power to aviation. Hydrogen fuel cells produce prodigious amounts of electricity with zero pollution, and while the technology may be a few years away from entering the GA fleet, its potential is potent.

“It is important that we not only continue to embrace and support our classic aircraft that brought us to where we are today, we must also fully support emerging technologies that will increase efficiency while reducing environmental impact,” said AOPA Vice President of Regulatory Affairs Murray Huling. “We look forward to helping foster new and affordable emerging technologies that will continue to influence general aviation aircraft in the coming years.” AOPA will continue to have a role to play helping the industry make the most of new technologies, including a mission to help support the flight training industry’s coming transition as electric aircraft begin to arrive.