Get the app Get the app
Get the latest news on coronavirus impacts on general aviation, including what AOPA is doing to protect GA, event cancellations, advice for pilots to protect themselves, and more. Read More
Already a member? Please login below for an enhanced experience. Not a member? Join today
News & Videos An old friendship rekindled

For many pilots, the words Microsoft Flight Simulator take us back to the day we first fell in love with flight, however “fake” the flying may have been (or how young we were at the time). Clunky computers with cathode ray tubes and keyboard controls, nary a mouse in sight­—much less a yoke or pedals—lit the spark for many pilots who went on to become airline captains or AOPA editors. Decades later, what was clunky and cute is now reborn as a sleek, stunningly realistic desktop simulator that arrived August 18, just in time to help pilots emerging from pandemic-induced lockdowns sharpen their skills in perfect safety.

The trailer (shown above) was posted on YouTube July 13, part of a media and social-media publicity push that the original release of this title did not enjoy. First released in November 1982, Microsoft Flight Simulator version 1.0 was written for MS-DOS, and sold on floppy disks that today’s teens might not recognize; there was no Facebook or Twitter on which to buzz about it back then.

The realism of that first release leaned heavily on the player’s imagination. AOPA Senior Director of Communications Eric Blinderman recalled that the 1980s iteration was “like playing Pong with planes.” Over time Microsoft’s game studio developed Bruce Artwick’s original code into a more and more realistic, robust training tool.

By the turn of the millennium, the original version was much improved. Ian Twombly, a senior content producer for AOPA, “taught myself VOR navigation on Microsoft Flight Sim” in 1999: “I had just experienced a horrible lesson on VOR navigation with my instructor. We were arguing how to intercept a radial toward the station, and I was not getting it. Reading the textbooks hadn’t done anything to advance my knowledge. So, I got on my Microsoft Flight Sim from the default location of Meigs Field, spent about 30 minutes teaching myself intercepts, and never looked back.”

Years of refinement had turned “Pong with planes” into a legitimate aviation tool, useful for practicing instrument procedures and even, at least to some degree, stick-and-rudder work, albeit without the motion and control feedback found in more expensive simulation. AOPA published custom scenarios for Microsoft Flight Simulator 2000, a set of preprogrammed plug-ins that facilitated virtual instrument approaches to AOPA’s real-life home, Frederick Municipal Airport in Frederick, Maryland.

Releasing the first major overhaul of Microsoft Flight Simulator in a decade in the middle of a pandemic was probably not part of the original marketing plan, but as luck would have it, there are many pilots still stuck for something to fly. As flight schools, clubs, and pilots emerge from pandemic lockdowns and look to limber up, realistic flight simulation can help. The AOPA Air Safety Institute recently published a Return-To-Flight Proficiency Plan, a handy resource for any pilot who has not seen a real-life flight deck or climbed into a cockpit in a while. Note that Step 2 of the six-step procedure recommends using home flight simulation to “hone your skills further before getting back into flying.”

As the software became more advanced, online flight simulation communities coalesced to share the experience, and to expand existing code with custom creations, including scenery and aircraft. Many contributors were aviation enthusiasts who had never flown an actual airplane, though certificated pilots also got into the act, including Connecticut pilot Scott Gentile, who founded A2A Simulations to produce realistic digital aircraft models for various flight simulation platforms. Slowly, digital modeling and computer simulation worked its way into pilot training, giving us the basic and advanced aviation training devices found in flight schools around the country.

Flight simulation became a shared experience, thanks to online communities like AVSIM that hosted forums to share software plug-ins, offer troubleshooting advice, and organize simulated flights. By 2009, competition from other flight simulation engines had taken the realism to new levels and left Microsoft behind. The company shuttered its Aces Game Studio that year, but Microsoft Flight Simulator was licensed to Dovetail Games, which released a Steam edition of Flight Simulator X. (For those of you of the Intel 8088 generation, Steam is an online gaming protocol that allows multiple players to remotely access a game hosted on a single computer.) There was also Microsoft Flight, a free download released in 2012 that was more like an arcade game than a simulator, though it has its fans (and its own forum on AVSIM).

But for this 2020 release, Microsoft turned to French software development studio Asobo, and essentially handed the company a clean sheet of paper and the keys to Microsoft’s Bing Maps database. Microsoft Flight Simulator (2020) seems unlikely to be a one-off, but the first step in Microsoft’s bid to return to dominance in home computer flight simulation.

It looks gorgeous. The fine details of lighting and shading are captured in still images released by the company to support preorders, and watching the videos of recorded in-game action stirs a familiar longing in the heart of this pilot, at least. The airplanes appear to move like airplanes do, carving through a virtual world where weather and wind can be customized to an unprecedented degree. Early reviewers have raved about the forthcoming release, which is now available (for computers running Microsoft Windows) online, starting at $59.99 for the basic software package, which includes 20 aircraft and 30 “hand-crafted” airports, simulated in more detail than the other 37,000 airports in the game.

Sporty's Pilot Shop posted a useful guide to computer requirements, and specifics on the aircraft models included in each edition. The system requirements are described in detail, which will help those of us who haven't bought a new computer in a while find the most frugal route to the Cirrus SR22, which comes exclusively with the Premium Deluxe version. The Deluxe Edition ($89.99) adds five aircraft and five highly detailed airports, and the Premium Deluxe package ($119.99) adds 10 more aircraft and 10 airports with the full digital treatment.

That should tide us over for a while. 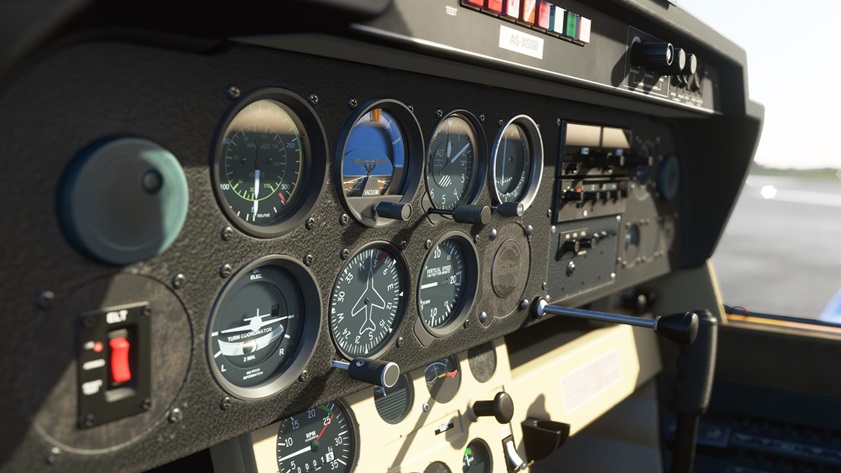