Get the app Get the app
Get the latest news on coronavirus impacts on general aviation, including what AOPA is doing to protect GA, event cancellations, advice for pilots to protect themselves, and more. Read More
Already a member? Please login below for an enhanced experience. Not a member? Join today
News & Videos Pilot's guide to influencing remote ID

Remote identification and tracking of drones is not going to go away, so let's start with that and do what we can to make it better. 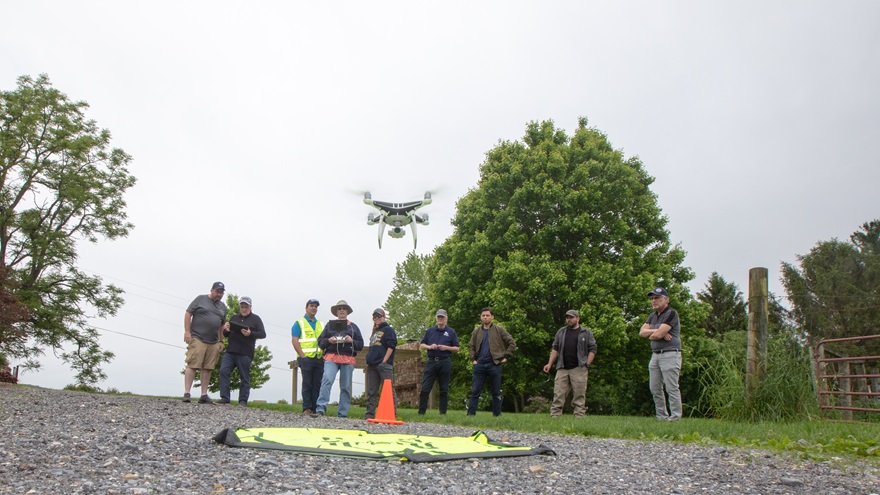 Participants in a DARTdrones class held during an AOPA event in 2019 watch a DJI Phantom take off for a mapping mission. Photo by Jim Moore.

The notice of proposed rulemaking published December 31 for remote identification of unmanned aircraft was a watershed moment for drones that stands to shape the industry for years to come. Remote ID will affect every drone user, whether a hobbyist or a commercial user operating under Part 107, and also those who fly traditional radio-controlled model aircraft for fun. The rule changes will set the stage for creating an unmanned aircraft traffic management system (UTM), and time is running out for the public to help shape the important details: Comments must be received by March 2; any that miss this deadline will be disregarded.

AOPA encourages members to weigh in and share a copy of submitted comments with us.

“We have received a lot of feedback from members, and their concerns will help shape our formal comments,” said AOPA Director of Regulatory Affairs Christopher Cooper. “While we are disappointed that the FAA did not extend the deadline for public comment, we appreciate the sense of urgency that surrounds this issue, particularly given the concerns expressed by law enforcement and public safety agencies.”

AOPA’s chief concerns about the proposed rules remain focused on three specific areas: the burden placed on recreational users that is not justified by the risk their operations pose; the broad application of internet connection requirements for those who wish to participate in standard and limited remote ID; and the potential for public disclosure of a remote pilot’s location while flying, which creates unnecessary risk to the pilot’s safety and could compromise privacy without significant benefit.

These simple tips can help you get through to the FAA on its proposal regarding remote identification of drones.

More than 13,000 comments had already been submitted by February 14, an unusually large number that reflects the deep concerns many pilots have also shared with AOPA. Many of those comments submitted to the FAA appear to be copied and pasted. AOPA has learned from many years of experience that copy-and-paste is not the most effective strategy to influence the final rule. It is more important to understand the rationale for what the FAA is trying to achieve and focus on offering alternative ways to achieve those goals instead of broad statements of opposition or opposing every specific issue.

While anyone can submit a comment on a proposed regulation, the FAA tends to give more weight to the views of stakeholders, be they individuals or the world’s largest pilot organization. The most effective comments include some detail about how the proposed rule will affect the commenter in specific ways, such as increasing the cost of a beloved hobby. Remote pilots who fly commercial operations under Part 107 may find the internet connection requirement particularly onerous, as many AOPA members have expressed, given the limitations of internet availability and the cost of connecting from remote locations in the field.

“This is one of the primary reasons we have delayed making specific comments in advance of the March 2 deadline,” Cooper said. “While we encourage early participation and comments based on AOPA’s concerns relating to privacy, cost, and safety, we believe offering members a form letter to submit would be less effective than asking members to state their concerns and solutions in their own personal words.”

The FAA has a lot of reading to do. Many of the first 13,000 comments submitted run to multiple pages, and while that’s understandable given the scope of the proposal, saying more than you need to tends to dilute the impact of any given comment.

“AOPA will be focusing on the core issues of concern to our membership, in a straightforward and concise manner,” Cooper said. “In fact, there are many beneficial parts in the proposed rule, and we will support the basic concept of remote identification as a tool to enhance safety and security for all airspace users. Safe integration of unmanned aircraft is a goal we share with the FAA, and the proposed rule moves us closer to that goal. We want the FAA to know we support Remote ID, but there are many issues that need to be addressed to improve the proposed rule for everyone.”

It's also worth noting that the FAA posed specific questions in the proposed rule, indicating the agency is willing to listen and likely to make adjustments based on feedback. You can search the online document electronically for the word “comment” to zero in on what the FAA is asking for.

Understanding what the FAA is trying to achieve (in essence, airspace awareness for all users), and offering less burdensome ways to achieve that is a proven strategy that the FAA has responded to in similar situations in the past. Now is the time to present ideas, not just opposition. For example, AOPA is likely to note that the FAA ignored many of our and other industry experts’ recommendations about remote ID implementation—despite being mandated by Congress to seek those views. It is also worth noting that the FAA acknowledged in its own rulemaking proposal that regulators in Europe took a different approach to remote ID for drones that does not require every UAS to connect to the internet in order to participate, favoring instead a more economical broadcast-only approach.

Expect these facts to be noted in AOPA’s comments, among others.

AOPA is keenly aware of the passion remote ID has inspired among many communities within our larger aviation family. The FAA is, by now, even more so. Let that passion show, but please keep in mind that the federal government is made of people, and most of them are doing what they think is best. Moreover, ridicule; sarcasm; and personal attacks on federal employees, other commenters, or anyone else will detract from the message you are trying to send.

As Cornell University notes in its own advice for public comment submissions (to any agency): “Even if you think the proposal is a bad idea, real people in the agency worked hard on it. You're not likely to change their minds by insulting them or their work.”

AOPA has received plenty of feedback from members already, and we’re always happy to get more. Consider copying AOPA on your comments—even if you don’t have anything to say that we have not already heard, it may help inform the case we make to the FAA, particularly with regard to the costs and impacts on individual operators. Submitting comments online makes this very easy—just copy and paste your words from the submission form and send that via email to [email protected].