Get the app Get the app
Get the latest news on coronavirus impacts on general aviation, including what AOPA is doing to protect GA, event cancellations, advice for pilots to protect themselves, and more. Read More
Already a member? Please login below for an enhanced experience. Not a member? Join today
News & Videos Iditarod champs finally catch a ride home

Thomas Waerner and his sled dogs won the world-famous Iditarod Trail Sled Dog Race on March 18, having traversed 1,000 miles of rugged Alaskan wilderness in nine days, 10 hours, 37 minutes, and change. The trip home to Norway took quite a bit longer. 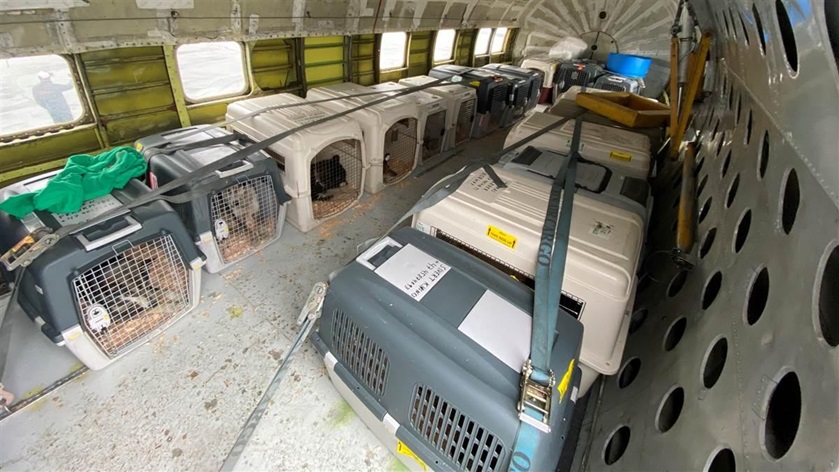 Winning the Iditarod earned Waerner a huge trophy, a new truck, and a $51,000 prize. the Anchorage Daily News reported. But the first-time champion's triumphant return to his wife and five children required weeks of work, thanks to the coronavirus pandemic that was already building as he navigated the most challenging endurance race on the planet.

Waerner’s own team of 16 dogs, along with another eight belonging to a fellow Norwegian musher, arrived on June 2 to a hero’s welcome at Stavanger Airport in Sola, Norway. Fire trucks flanking the taxiway showered their ride in a watery salute, welcoming the Douglas DC–6 destined to join the collection of the FlyHistorisk Museum in Sola, having crossed the Atlantic Ocean with Robert Everts, owner of Everts Air Alaska and Everts Air Cargo, personally commanding the final flight of N151.

The long journey (nearly 16 hours nonstop from Yellowknife in Canada’s Northwest Territories, where they made a pit stop to walk the dogs and check the weather) had been years in the making—Everts’ late father, who died in 2017, had been working on a deal with the museum to find N151 a good home after its working days were done. The museum was eager to acquire the last surviving aircraft from the fleet of one of Norway’s original airlines, Braathens South American & Far East Airtransport A/S, founded in 1946.

The global coronavirus pandemic nearly nixed that long-awaited deal, thanks to the massive disruption of global financial markets and a plunging Norwegian currency, but stranded sled dogs and a musher with a sponsor proved to be very helpful.

Waerner said in an audio chat after his arrival home in Norway that he had learned that the transaction between the charter operator and the local museum was off after reading an article while staying with a friend in Fairbanks after the race. Waerner had been working since the race ended to figure out how to get his dogs, and himself, back home. Soon after reading of the potential flight to Norway, Waerner called the museum, then his sponsor, and got a series of conversations going that saved the aircraft sale—and provided him, and 24 sled dogs, with air transportation. 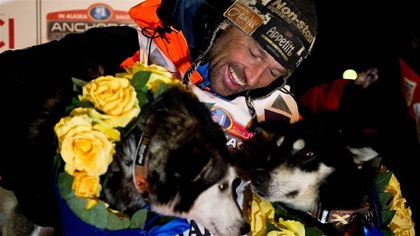 “I am really, really glad so many people have been working so hard on it,” Waerner said, describing the effort as a “crazy idea” that worked out well.

Waerner had to wait a few more weeks for everything to come together, and said he visited the airport “almost three times a week” to watch as the Everts crew worked to replace windows that had been removed for cargo service, and restore the original Braathens SAFE livery, along with a bonus: custom nose art created by Ron Klemm, who retired from Everts Air Cargo after logging 40,600 hours over a flying career that spanned 50 years to the day. Everts provided that tidbit in a phone conversation from Norway on June 3. (AOPA had the pleasure of flying with Klemm in 2008.)

Klemm’s creation was kept under wraps as a surprise for the Norwegians, and Everts said he was, in turn, surprised to see so many people at the airport in Sola, eager for a glimpse of the new arrival.

“It’s truly amazing how fired up they are,” Everts said. He has spent his life around rugged old airplanes, flying them, fixing them, making a living with them. He still has another eight DC–6s in service for the family’s companies. The “dog tired” pilot said during the welcome ceremony (livestreamed by a Norwegian media company) that it was gratifying that this particular aircraft would have a future inspiring others. 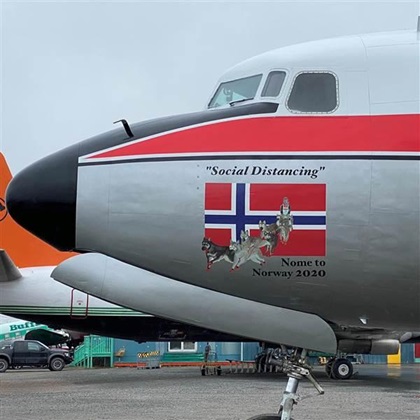 “It’s going to be a great memory machine,” Everts said during the ceremony, which was conducted in two languages. “It’s a fine flier right now. I’d gas it up and hop in to take it to Honolulu.”

Everts said the transatlantic voyage was his third on the North Atlantic route, having brought a pair of DC–6s back from France years ago; he and his father had also flown a Curtiss C–46 Commando from Japan to Alaska over the Pacific Ocean, though most of his flying has been in and around Alaska. His latest voyage went off almost without a hitch, though a wonky propeller governor had prompted them to turn back to Fairbanks for a quick repair after the first departure attempt.

Many eyes followed their progress. A private Facebook group created by followers of the project had nearly 2,000 members by the time the DC–6 full of dogs arrived in Yellowknife, where Buffalo Airways waited to welcome them, top off the tanks, and help walk the dogs one last time before they crossed the ocean. Television star and Buffalo Airways veteran Mikey McBryan posted a video on YouTube that covers much of the story.

“It really was fun to be in Yellowknife,” Waerner recalled. “I think it was a special moment.”

Everts said that the flight to Norway was as smooth as he could have asked for.

“We had pretty much favorable weather the whole way… the wind was always at our back,” Everts said. They picked up “a little bit of ice going across the top of Greenland, as always,” but that’s no trouble for a DC–6, which is well-equipped for flight into known icing.

He let Waerner have a turn in the left seat, and the Iditarod champion said he loved the feeling of being in control of such a large aircraft, and he has dreamed of becoming a pilot since childhood. “That was amazing.”

Waerner plans to take flying lessons once his mushing career winds down, though the 47-year-old champion hopes to return to Alaska for the 2021 edition of the Iditarod, pandemic permitting. “I cannot sign up before I see that the commercial airlines are flying again,” he said, noting that it takes four separate flights to get a dog team from Norway to Alaska. Airlines allow up to four dogs per flight, so each race requires a complicated feat of logistics, even in the best of times. 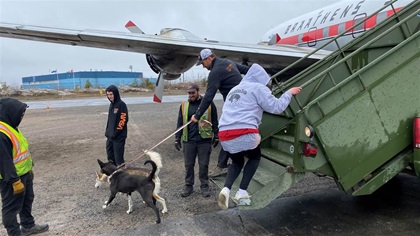 Everts, who may yet get another chance to fly a planeload of world champion dogs, given that Alaska is his home, said the canine athletes made excellent passengers. “Once those dogs got in the kennels … it’s almost like someone turned the radio off. Complete silence. When the engines started, it was like music to their ears and they went to sleep.”

Waerner explained that his champion athletes are better travelers than most people. As long as they feel safe and are well-fed, they are expert sleepers. “Dogs are able to kind of live in the moment. They’re not like us … that’s why they can do this incredible performance in the race.” The weakest link on any Iditarod team, he added, is the human. “If you can’t control yourself, your mind, you will not perform … the dogs will pick it up.”

So, in the space of a few months, Waerner achieved two dreams he has had since childhood: winning the greatest sled dog race in the world, and flying an airplane. His first hour in the left seat just happened to be aboard one of the greatest airliners in history.

On June 4, Everts began his long journey home, another complicated feat of logistics requiring multiple connections, to resume his day-to-day work flying great, old airplanes that have long since proved their worth. 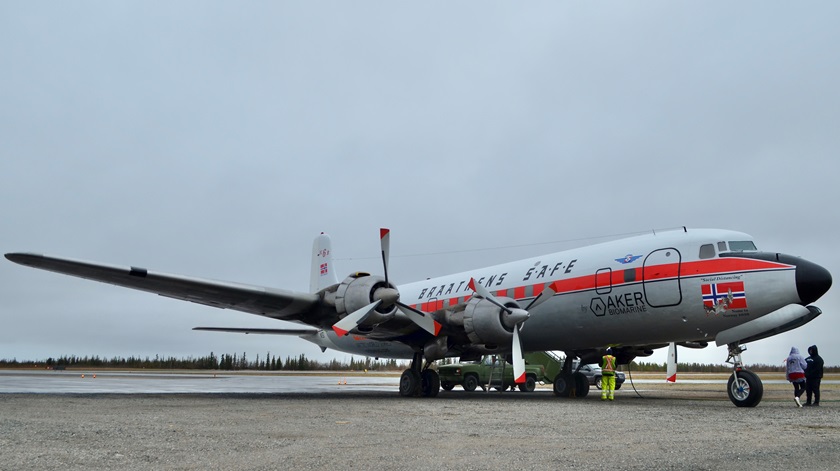