Get the app Get the app
Get the latest news on coronavirus impacts on general aviation, including what AOPA is doing to protect GA, event cancellations, advice for pilots to protect themselves, and more. Read More
Already a member? Please login below for an enhanced experience. Not a member? Join today
News & Videos Aircraft Maintenance: Altimeter and transponder checks
Sponsored by Aircraft Spruce

A reader recently asked me what the point was of transponder/altimeter checks that aircraft owners face every two years, given advances in avionics reliability. 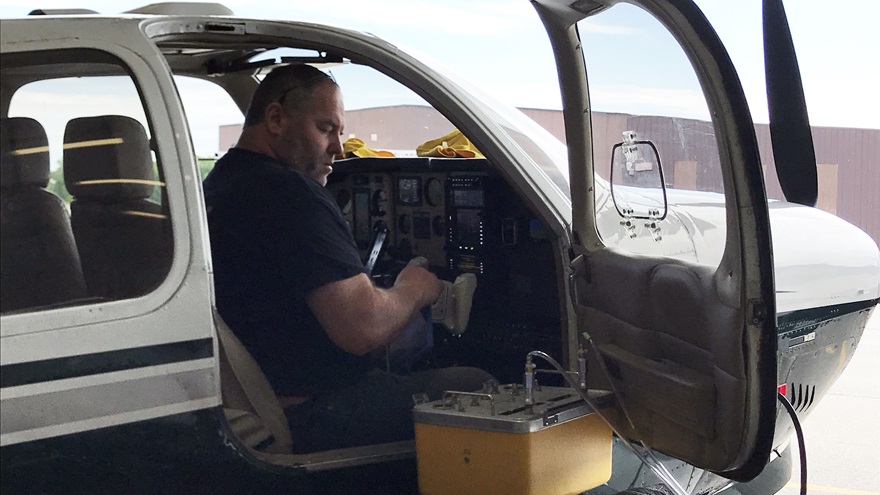 Jeff Wall at Infinity Aviation performs the transponder and altimeter checks on SocialFlight's A36 Bonanza. Photo courtesy of Jeff Simon.

I thought this might be a great opportunity to answer the question, while I’m waiting at Infinity Aviation in Nashua, New Hampshire, for my own aircraft’s FAA-mandated biennial inspection of the pitot/static system, altimeter, and transponder.

The requirements for these inspections for Part 91-operated aircraft can be found in the federal aviation regulations:

Altimeter (FAR 91.411): The aircraft's static system, altimeter, and automatic altitude-reporting (Mode C) system must have been inspected and tested in the preceding 24 calendar months before flying IFR in controlled airspace. FAR 43 Appendix E, Altimeter System Test and Inspection, lists the items that must be checked.

The need for these inspections seems obvious. After all, if you’re flying in controlled airspace, the air traffic controller is using your transponder’s signal, including the altitude from the encoder, to provide traffic separation between you and the other aircraft. And, if you’re flying IFR, it’s critical that you’re actually at the altitude that your instruments indicate. However, avionics and instrument technology has evolved dramatically from the time that these regulations were originally written.

Traditional analog altimeters are mechanical instruments that use a sealed bellows to move a dial to indicate your altitude. Over the years, moisture, temperature, dust, corrosion, and many other factors affect the accuracy of the instrument. And so, altimeters routinely require testing and adjustment to ensure that the altitude displayed is within 25 feet of the altitude indicated by calibrated test equipment. Similarly, older encoders also use a combination of mechanical and electrical designs to send the aircraft’s altitude to the transponder (with similar failure modes and adjustment requirements). The transponders from the days of yore used analog “cavity tubes” that were prone to failure and calibration issues. All of this added up to a high likelihood that the biennial check of all these instruments would find enough issues to make the inspection requirement for the entire general aviation fleet well warranted.

But, what about now? With solid-state transponders and encoders being the norm, and a growing fleet of glass panels with no mechanical altimeters or airspeed indicators, do these routine inspections still make sense? I had that very discussion with Jeff Wall at Infinity Aviation and was surprised to hear that the answer was an emphatic “Yes.”

“Everything that feeds into these avionics is still mechanical,” said Wall. “Pitot and static lines develop leaks, fittings loosen, and over time the elements take their toll on the accuracy of solid-state devices as well.” Even for aircraft without mechanical altimeters, Wall still finds about 50 percent of the aircraft he works on for their 24-month checks require some form of leak repair or avionics adjustment, even for aircraft with glass panels.

In my case, our Bonanza is equipped with an Aspen EFD1000 Pro primary flight display, a backup mechanical altimeter, L3 Lynx ADS-B transponder, and Trans-Cal solid-state encoder. The Aspen, Lynx, and Trans-Cal passed with flying colors, but the altimeter required adjustment to get within the required 25-foot accuracy. Two years ago, the same inspection found a large leak in the static system from a failed fitting. And so, even though I grumble every two years about having to bring the airplane to the avionics shop for its biennial checkup, it seems that the process remains money well spent. Until next time, I hope you and your families remain safe and healthy and wish you blue skies.