Get the app Get the app
Get the latest news on coronavirus impacts on general aviation, including what AOPA is doing to protect GA, event cancellations, advice for pilots to protect themselves, and more. Read More
Already a member? Please login below for an enhanced experience. Not a member? Join today
News & Videos Colleges collaborate on return to flight training

Collegiate flight programs across the United States are sharing techniques to help get flight training off the ground as coronavirus pandemic restrictions begin to ease. 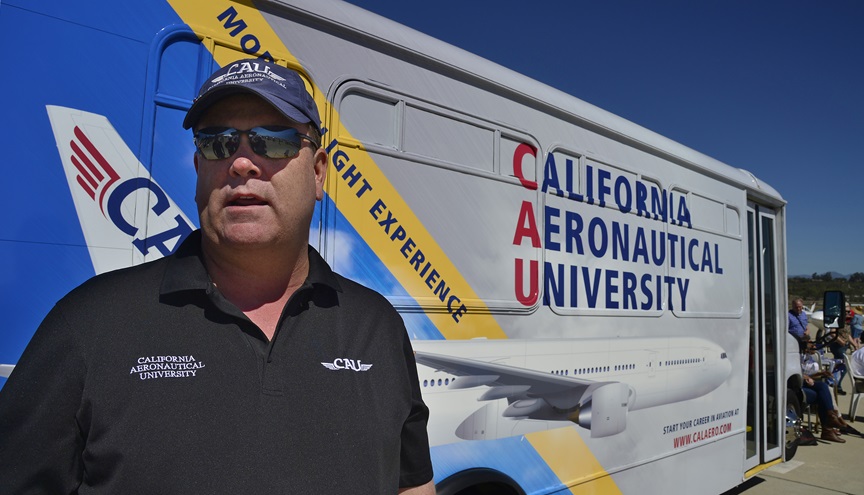 California Aeronautical University President Matthew Johnston shares ideas with other aviation colleges navigating health, safety, and flight regulations during the coronavirus pandemic. Photo by David Tulis.
Institutions traditionally in competition with each other to recruit flight school students are instead collaborating to help solve issues common to the flight training environment.

A series of emails among dozens of collegiate flight schools morphed into a nationwide alliance to help share health safety tips and procedures that educators could use during day-to-day classroom, office, and flight training situations.

ERAU Assistant Dean for the College of Aviation and Flight Training Department Chair Kenneth Byrnes said the communication led to a webinar attended by many of the nation’s leading aviation university educators.

"We’ve been communicating for weeks via email and asking questions, but today was the first webinar and in about two weeks we’ll do it again,” he said after the inaugural online session May 5. “We discussed what we were doing [at each school], and we talked about common issues, concerns, and best practices” unique to flight training departments, which include multiple people sharing small aircraft, flight simulators, desk space, and work areas. “There is no competition when it comes to safety and that’s the attitude that we all have.”

ERAU requires those on campus to pass daily wellness screenings that include questionnaires and temperature checks. The university had previously posted requirements for instructors and students to don gloves and face masks but “hadn’t thought about how to put them on” correctly, he said. During the session, University of North Dakota instructors shared videos showing proper use of the protective equipment, and Byrnes “came away with some ideas” about how students, educators, and staff could learn proper donning techniques. He said sharing personal and health safety guidelines was one of the most important things for college collaboration. “We’ll fight over students in the future,” he confided. 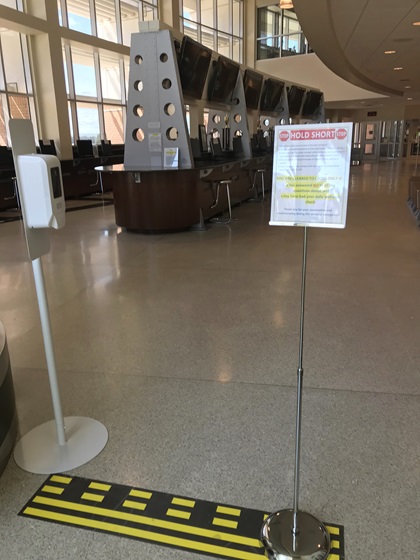 One idea he shared was a series of “hold short” lines with red-and-white signs similar to taxiway signage but instead taped onto floors and posted in common work areas to advise others to keep their distance. The simple but novel approach drew praise from other schools and aviation associations. ERAU also plans to study what Byrnes called “mask fatigue,” which might adversely affect individuals wearing face masks for extended periods of time.

The educators participated in multiple surveys to help them pinpoint common needs. One theme that surfaced was a thirst for virtual training methodology and how it could evolve into the potential for less in-person training currently required by FAA regulations. “We are willing to do—and want to do” evaluations to move the technology forward. “Just like flight simulators, you now have something that blows [traditional hands-on training] out of the water 100 times. The things you can do and the experiences you can provide—I don’t see an end to it. The secret ingredient is a quality experience.” Byrnes said he believes in virtual-reality technology “1,000 percent” but admitted “there’s still a lot of work to do” before regulators would accept virtual-reality proficiency in lieu of hands-on training.

UND Assistant Chair of Flight Academics Lewis Archer said faculty leaders were already making “Plan B” by the time the school sent a request to the FAA to deviate from its training course outlines, which would allow faculty to shift to online delivery. “We had the drafted request in the hands of our principal operations inspector—who is based out of Fargo’s FAA district office” by mid-March, the aviation assistant professor said. “We were preparing for them to say no,” but were instead surprised to receive a letter of approval, he noted on the aviation school’s blog.

He surmised that a chance encounter with an FAA inspector visiting campus prompted the speedy reply while additional social distancing and training restrictions were hindering traditional learning environments. “I was quite surprised not only to get that response, but also to get it that quickly,” Archer said. To help other institutions facing similar hurdles, UND faculty shared their regulatory approach as soon as they were granted approval. “I’d like to think we paved the way,” Archer said.

CAU President Matthew Johnston said the Bakersfield college remained open while schools in other states paused their flight training regimens. California Gov. Gavin Newsom determined that flight schools were an essential business when stay-at-home orders were issued March 19, “so we’ve been operating under that premise” ever since. “We’ve got students in housing and we’re still flying,” said Johnston. He added that “state-by-state regulations are really driving a lot of these decisions” about colleges resuming their flight training. “What one state allows, another one does not.”

Similar to ERAU, students at CAU are quizzed on their recent whereabouts, and their temperatures are taken before they can enter school grounds. He said the young aviation college is a “very closed campus” with about 250 flight students in various stages of training. “We’re like our own little compound so we can monitor the situation more.” Over the past few weeks a handful of students relocated to their family homes. In order to keep others at CAU safe from the coronavirus, those students aren’t immediately allowed to return to campus, especially if they traveled to higher-risk areas.

Johnston said CAU’s smaller size is an advantage during times like these. “Some schools are part of larger institutions, so they have to go with what the entire institution is doing, whether it’s flight training, or [students studying] medicine. For us, we are independent of all that.”

Johnston added that he was “absolutely” interested in helping out other flight schools. He pointed out that innovations are freely shared among them. “One of the things we came up with is a ‘brakes on or brakes off’ idea that alerts instructors and students if the aircraft is sanitized or not.”

A green/red reversible card can be flipped over and placed in cockpit windscreens, in flight simulator devices, and in common work areas to visually alert those nearby to either exercise caution or proceed with confidence. The idea is similar to a concept practiced by Brazilian steakhouses that signals if diners want more—or less—food. “It’s funny, but it still works.”

Johnston complimented the Aviation Accreditation Board International and the University Aviation Association on helping school flight departments chart paths through the fluid environment of procedures, protocols, and guidelines. “We’re still COVID-free, but the nature of flight training makes it difficult to social distance,” Johnston noted.

The University Aviation Association scheduled a May 14 webinar to help educators navigate university flight training operations amid the coronavirus pandemic.

ERAU’s Byrnes summed up the cooperation by saying the group of educators “has a lot of love for each other” and is bonded by the common goal of creating good aviators. “We found out that if we work on these things together, we’re much stronger” as a group. “The more we collaborate, the safer everyone is going to be.”