Get the app Get the app
Get the latest news on coronavirus impacts on general aviation, including what AOPA is doing to protect GA, event cancellations, advice for pilots to protect themselves, and more. Read More
Already a member? Please login below for an enhanced experience. Not a member? Join today
News & Media Paying it forward

Thanksgiving came early for young flight instructors Jonathan Gray and Zach Douglas. In October, the pair received training for their multiengine instrument ratings as a gift from husband and wife instructors Endre Holen and Stephanie Goetz. 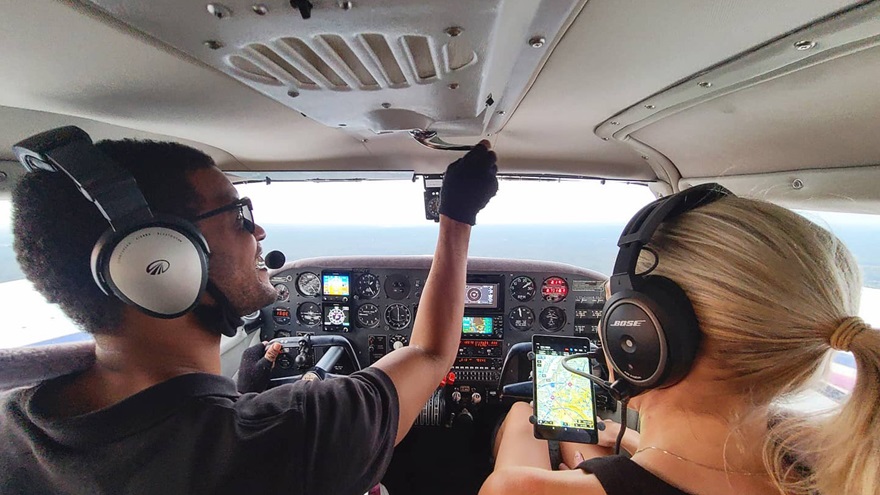 Jonathan Gray flies with Stephanie Goetz. Photo courtesy of Stephanie Goetz.
“It really was unexpected,” said Gray a few weeks after earning the coveted rating. “But that’s kind of the beautiful thing about being around here.” In this case “here” is the Luke Weathers Jr. Flight Academy at Mississippi’s Olive Branch Airport. The community-supported flight school is an offshoot of the Organization of Black Aerospace Professionals. OBAP started the academy to provide flight, maintenance, and air traffic controller training for students in the Memphis, Tennessee, area, the hometown of Tuskegee Airman Lt. Col. Luke Weathers Jr. After World War II, Weathers became the first Black air traffic controller at Memphis International Airport. After earning his instructor rating at the academy, Gray began instructing there in single-engine airplanes, hoping to earn enough money to earn advanced ratings toward his goal of being an airline pilot. Douglas followed a similar path.

Meanwhile, Holen and Goetz, recognizing the large disparity in gender and ethnic background in aviation, wanted to make a difference and were considering giving financial scholarships to three students at the academy for multiengine ratings. “We really believe that multiengine ratings are the gateway to big pilot jobs, because, of course, to fly most jets and to fly jets for the airlines you have to have a twin or multiengine rating,” Goetz said. A third student, Sylver Ford, completed her training with the couple in mid-November in Las Vegas. 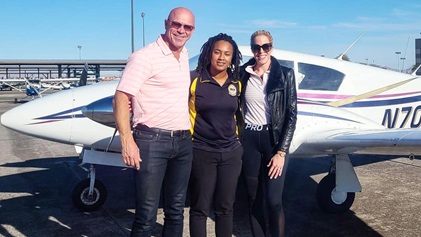 While Holen has been an instructor for a number of years, Goetz just earned her instructor and multiengine instructor ratings earlier this year. Both fly a Cessna Citation and a Piper Twin Comanche. They picked the Piper for the training, and flew it from their home near Minneapolis to Olive Branch Airport. “It was a fun plane to train them in because the Twin Comanche is known for being a little tougher of the light twins to fly for training,” Goetz said. “And I thought that that was helpful for them, because if they're going to be flying advanced aircraft and they're going to be flying Citations or Gulfstreams or a Boeing…or an Airbus, they're going to have to be able to deal with situations that happen really quickly. And they all handled it beautifully well, very, very well and had no problem at all with it.”

The students agreed the experience was challenging.

“The training was pretty intense because we're learning a whole new aircraft and learning different speeds. Because basically we were trying to treat it as a Cessna 172 at first, and then we later find out we can't really do that,” Douglas said.

The program was a workout for the instructors, too. “We got there on a Monday, we trained two students all the way until on Friday,” Goetz said. “That’s when they did their checkride. And they were absolutely thrilled with the accelerated course, because you really just dedicate basically 7 a.m. till midnight. You even sleep thinking about flying. So, it was a really exciting time and incredibly rewarding for us, but incredibly remarkable for these students who got to go through it.”

The Friday checkride came around fast, according to the students. “We're studying, we're pressuring ourselves. But thanks to Endre and Stephanie, they made it happen for us. Their training was unbelievable—how fast they got us done and made sure that we were ready to go when the time came,” Douglas said. 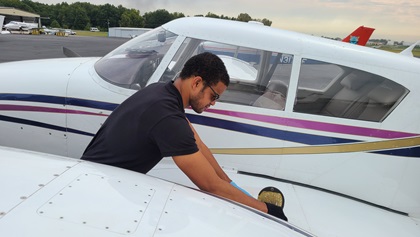 As it turned out, the Twin Comanche had a previous connection to OBAP. Before the couple bought it last year, it had been owned by an airline captain whose son had used it for his multiengine rating and to build twin time. The captain was a member of OBAP. “It's almost like the Twin Comanche was destined to be down there at some point,” Goetz said.

Gray observed that the assistance from Holen and Goetz is typical of what happens around the academy. What’s amazing at Luke Weathers is the “support and all of the people that just come through just to lend a helping hand to people that need it. So yes, Stephanie and Endre came into our lives and funded our multiengine training. They were phenomenal people and they honestly have changed my life and I'm forever grateful for them,” he said.

Academy Director Capt. Albert Glenn said the students’ excitement was palpable. “They were overwhelmed. I mean, they enjoyed it. Some students get the ratings and you don't see that big smile on their face. Plus, it was a surprise. This wasn't something that was really in their future. They were busy saving the funds for it, so it gave them an opportunity to get the multiengine rating and to look forward to getting their multiengine instructor rating next.”

Glenn, who had a 40-year career at FedEx as a pilot and in management, now oversees the nonprofit flight school. The school’s success comes from the community involvement, he explained. On any given day, active and retired airline pilots, corporate pilots, mechanics, and avionics technicians may be there volunteering their time. The school is located just 10 nautical miles southeast of FedEx’s headquarters at Memphis International. All of them are there, like Goetz and Holen, to make a difference, according to Glenn.

In addition to offering ratings necessary for becoming an airline pilot, the OBAP program helps to give students headed to aviation colleges a leg up when they get to campus. “One of the biggest challenges for first-generation pilots, which is a lot of Black pilots…is that they show up at colleges or aviation programs and they're there with students that, you know, my dad was a pilot. My mom was a pilot. And it's a struggle for them because they might have never been in an airplane before.”

To address that need, the school developed the Solo Flight Academy to get them to solo before college or, in some cases, get them to a private pilot certificate. “We’re seeing some success around that now,” Glenn said.

Learning to fly in the 1970s, Glenn had trouble finding a mentor. Some instructors agreed on the phone to teach him, but “as soon as they saw me they were too busy to teach. And I finally met a gentleman who actually was a professor at Embry-Riddle, who ended up saying, ’Hey, I taught everybody from all over the world in the Air Force. I don't have a problem.’”

Glenn said he always remembers that and said his role at the academy “gives me a chance to give back too.”

That spirit of paying forward is now transcending a new generation.

While Gray’s ultimate goal is to be an airline pilot, he understands the responsibility he has to help others the way he has been helped. “One of the biggest things that Endre and Stephanie taught me is that there's always a moment that you can pay things forward. So that's definitely within my plans. Any student that needs help, if I have the ability and the time to help them, then absolutely, that's what I'm going to do. So that is definitely part of my future, part of my career now.” 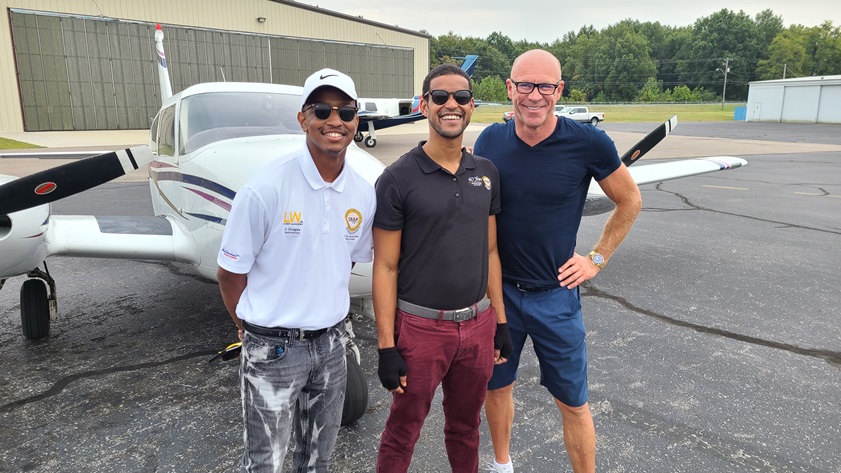