Get the app Get the app
Get the latest news on coronavirus impacts on general aviation, including what AOPA is doing to protect GA, event cancellations, advice for pilots to protect themselves, and more. Read More
AOPA will be closing at 2:30 PM ET on November 25, 2020, for the Thanksgiving holiday. We will reopen at 8:30 AM ET on Monday, November 30, 2020.
Already a member? Please login below for an enhanced experience. Not a member? Join today
News & Media Unmanned aerial prospecting

Terrain-hugging drones flying precisely mapped routes are assisting in worldwide prospecting for underground treasure. If there really is "gold in them thar hills,” drones have a particular way of finding it. 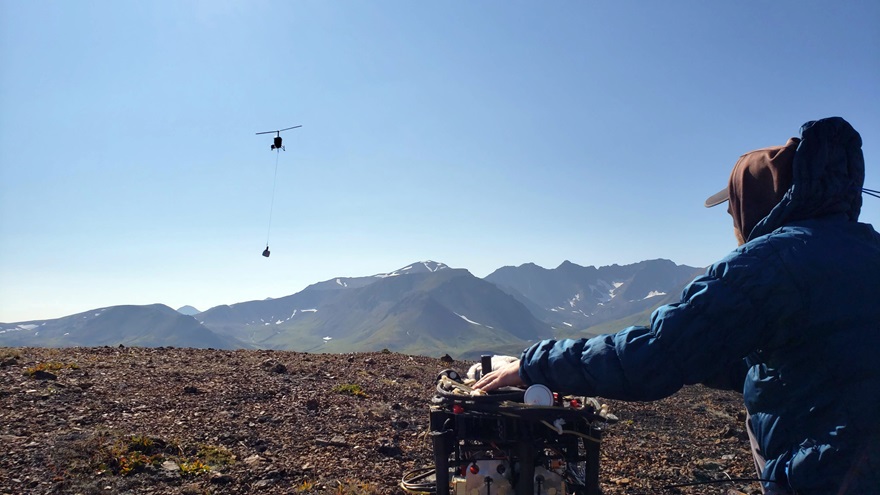 A Canada-based geologic consulting firm is using drones to probe beneath the surface for mining clients, searching for pay dirt containing gold, uranium, copper, and other precious and base metals.

Michael Burns is a geologist and president of Pioneer Exploration Consultants Ltd.  He and his team use a drone-based magnetometer survey technique he developed to analyze subsurface rock and mineral formations. A magnetometer is essentially a very sensitive compass. Your phone likely uses one to sense direction. With Earth’s magnetic field as a guide, drones are gathering data from which magnetic “maps” of the terrain are made. Those maps, in turn, inform prospecting clients where to drill.

As a modern-day prospecting tool, drones can apply their “cheaper, safer, better” stamp to mining exploration much as they’ve done with other aerial missions traditionally performed with manned fixed-wing aircraft or helicopters.

Magnetometer surveys have been used for many years as an established, reliable first step in any kind of mineral survey, Burns said in a telephone interview. Magnetometers are passive sensors that measure variations in the Earth’s magnetic field. The recorded data, depending on its quality, can paint a picture of what lies below. While we more commonly hear the terms lidar, photogrammetry, and thermal imaging associated with unmanned aircraft missions, magnetic surveys are well known in the exploration industry. 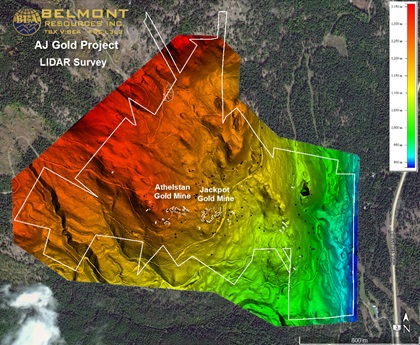 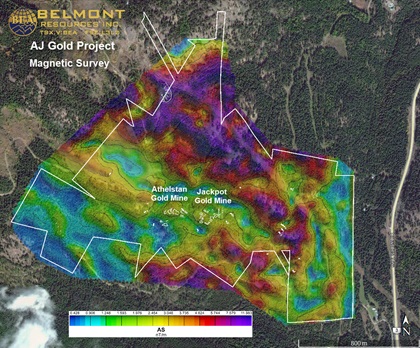 “Geophysics is a little bit different because we're collecting data about the Earth that starts from the surface down,” Burns said.

A magnetometer can help locate minerals and precious metals buried from a few feet down to a mile below the surface. A magnetometer doesn’t detect metal, he explained: “It basically reads the Earth’s magnetic field and maps subtle differences in rock types and structures within those rock types. Gold is typically found in structurally controlled environments and where different rock types contact each other.” While Pioneer provides a full suite of geophysical surveys, many of the company’s clients are searching for gold now based on its market value. That said, there are the occasional hunts for other types of buried treasure and unexploded ordnance.

Magnetometers can be worn on backpacks and carried by teams on foot. It’s a slow slog, and suitable for small areas—but it quickly becomes very expensive and time consuming as the search expands.

Higher altitude fixed-wing operations might require upwards of $40,000 just to stage an aircraft, and manned aircraft can’t track as precisely as a drone can, according to Burns. The closer the magnetometer is to the Earth, the more precise the data can be. Burns likens it to photos that have more detail taken closer to the ground. Helicopters can fly lower and slower than fixed-wing aircraft, but still can’t track a course and maintain a consistent altitude above obstacles as precisely or as low as a drone can. Burns saw an opportunity for unmanned aircraft to be employed in the right-sized exploration area, and devised his drone-based magnetometer survey method in 2014. He has applied the method globally since then.

Burns stresses that it’s all about the quality of the data, and good data comes from good planning and accurate flying. A typical mission for Pioneer might involve five to 10 days of flying that may be preceded by two to three days of in-office planning. Developing a solid plan to hunt gold requires very accurate elevation maps from which to program routes and altitudes. As part of that planning, and to obtain the best bare-earth view of the surface, they break out the lidar and fly helicopter surveys with the heavier sensor. The lidar will strip away tree cover and reveal terrain, such as outcroppings and structural features that might not be visible under vegetation. That’s why some Pioneer jobs, including the gold hunt for Belmont Resources Inc. in British Columbia, pair helicopters and drones with different sensors.

Pioneer’s workhorse platform is the DJI Matrice 600, but the company also uses larger multirotor aircraft that are custom built.

“Those big, heavy lifters are for surveys at higher altitude where we need a heavier payload capacity,” Burns said. Pioneer uses non-DJI software for flight planning and control. “Beyond the drone itself, there's a lot of modification into what we do to make it applicable for our types of survey work.”

Burns says a mission might require 25 to 30 launches a day. Two small generators run full-time keeping five sets of batteries charged for all-day flying. “Our pilots work extremely hard and they fly a huge amount of missions. Safety is always really key. Our focus is to collect the best quality data in the industry. It just turns out that we’re using drones to do it.”

Burns says in order to offer the magnetometer the cleanest signal, it is hung below the drone so that the magnetic “noise” from the drone is isolated from the instrument. Typical flight altitudes are roughly 30 to 60 feet above the terrain or highest obstacle.

Burns adds that his company never promises a find to a client, but does guarantee very high quality data. Clients "interpret that and they take the risk of if something's there or not.” To underscore the need for accurate data another way, Burns offers that one drill hole might cost $100,000 and a survey done by Pioneer might suggest 10 potential drilling locations.

George Sookochoff, president and CEO of Belmont Resources, is a fan of drone magnetometer surveys because of the high quality of data Pioneer has delivered.

“There’s no comparison [to helicopter-acquired data]. You’re getting higher quality at half the cost,” he said as he reviewed the most recent imaging data delivered by Pioneer. “I’m just so impressed."

Burns and crew have flown missions around the world, including Africa, North and South America, Central America, Asia, and Europe. While he admits to some competition nipping at their heels, Burns also suggests that geophysical mapping has a higher hurdle for entry than simply buying a drone and a magnetometer. His team of geologists and geophysicists has years of exploration experience, and all of the remote piloting is performed by Pioneer staff. Pioneer’s successes have served as their best word-of-mouth advertising.

For more information on Pioneer and its full suite of remote sensing and surveying solutions, visit their website. 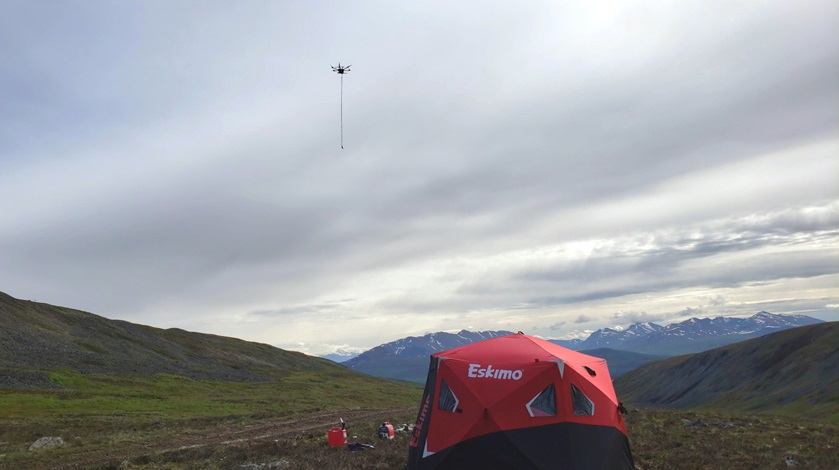 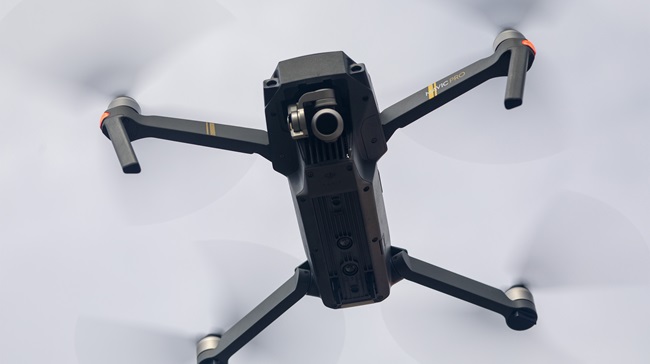