Get the app Get the app
Get the latest news on coronavirus impacts on general aviation, including what AOPA is doing to protect GA, event cancellations, advice for pilots to protect themselves, and more. Read More
Already a member? Please login below for an enhanced experience. Not a member? Join today
News & Media Michael Goulian named chair of AOPA Foundation's Hat in the Ring Society

Aviation enthusiasts and airshow attendees have been thrilled by Michael Goulian’s performances for the past 27 years. Few others can stoke the passion for aviation like Goulian, who has been a shining embodiment of the freedom to fly. 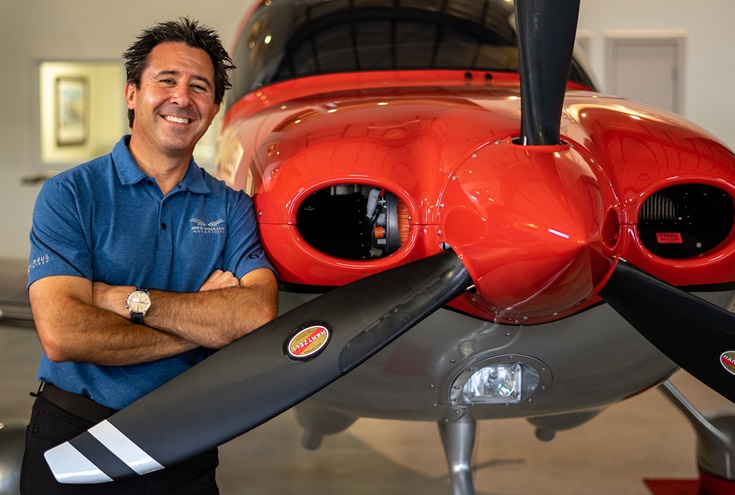 Goulian’s strong and long-standing support of general aviation has soared to a new level, as he has been named chair of the AOPA Foundation’s Hat in the Ring Society. The society, the longest-running philanthropic giving program within the AOPA Foundation, helps fund important initiatives, including AOPA’s You Can Fly program and the Air Safety Institute, both of which are fully supported through tax-deductible contributions to the AOPA Foundation.

The You Can Fly program engages young people in aviation STEM education while they are still in school; supports flight training providers; makes aviation more affordable and accessible through flying clubs; and helps bring “rusty pilots” back into aviation. The Air Safety Institute is dedicated to improving GA safety through free educational resources and initiatives.

“Aviation has been both a vocation and avocation for me,” said Goulian. “There is no passion on Earth like ours for flying. We’re a tight-knit community and there are so many ways to give back to general aviation. I am happy to be part [of] one of those ways—an important one.”

An AOPA member since 1990, Goulian has been involved in aviation since the mid-1980s, as his parents founded and operated a flight school and maintenance facility in Massachusetts. He is a three-time member of the US Unlimited Aerobatic Team, competed in the Red Bull Air Race World Championships from 2006 to 2019, and was the 1995 National Unlimited Aerobatic Champion. Goulian has written two books on aerobatics and produced numerous aviation safety seminars and videos.

“We are thrilled to have Michael on board,” said Melissa Rudinger, executive director of the AOPA Foundation. “His support for GA and AOPA is matched only by the countless thrills he has given airshow and air race fans. This is a natural partnership.”

In 2017, Goulian and his wife, Karin, founded Mike Goulian Aviation, focused on flight training in, and management of, Cirrus Aircraft. In 2014, Goulian was awarded the Aero Club of New England Presidential Award for significant contributions to aviation.

In thinking back about his enduring relationship with AOPA, Goulian recalls a memorable day when the organization helped save his family’s flight school business.

“We were being hounded by frivolous noise-related lawsuits that posed a real threat and could have shut us down, despite being without merit,” he said. “As I saw the AOPA airplane taxi up to our ramp, I remember telling my mom, ‘You don’t have to worry, AOPA is here.’ That was the day I saw firsthand what AOPA means to the aviation community.”

Learn more about the AOPA Foundation and the Hat in the Ring Society.