Most collisions between general aviation aircraft and birds have occurred 500 feet or less above the ground, although those that occur higher were more likely to cause damage, said a report that studied 30 years of strike data involving aircraft and birds or other wildlife. 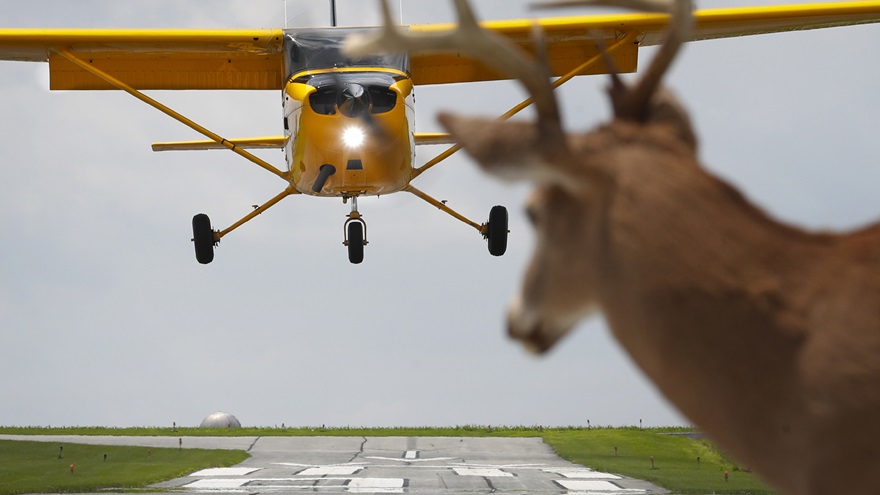 The report, Wildlife Strikes to Civil Aircraft in the United States, 1990–2019, issued in February by the FAA and the U.S. Department of Agriculture Wildlife Services, summarized data from the National Wildlife Strike Database, offering a headlining insight that the number of strikes reported to the FAA “increased 9.3-fold from 1,850 in 1990 to a record high of 17,228 in 2019.”

Yes, reptiles: A photo in the report shows a large American alligator resting on a runway at a military airport in Florida—and an hour passed before anyone could say “See you later” to the ‘gator. And according to the report, “From 1990-2019, 27 alligators, 24 green iguanas, and 1 spectacled caiman have been struck by civil aircraft” in the United States.

The 30 years of data reached some conclusions that likely confirm anecdotal impressions held by pilots. For instance, bird strikes have been more likely during the day, while aircraft collisions with deer and other land animals were more probable at night.

For birds, the July-through-October period held the highest likelihood of collisions. Twenty-nine percent of all deer strikes occurred in October and November. 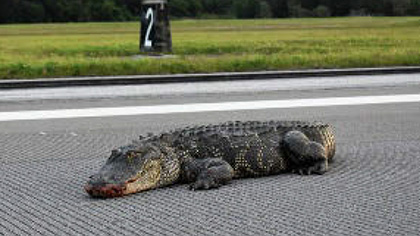 Less intuitive, perhaps, was the determination that arrivals produced more encounters than the takeoff-and-departure phase. Seventy-three strikes during the period destroyed the aircraft involved, of which 56 percent occurred at GA airports. Forty-six of the destroyed aircraft, or 63 percent, were light GA aircraft.

Commercial and GA aircraft fared differently in certain strike scenarios. Despite a 190-percent increase in reported strikes from 2000 to 2019, damaging strikes declined 4 percent. Commercial aircraft in the airport environment (described as at or below 1,500 feet above ground) had the biggest declines of damaging strikes, while “damaging strikes have not declined” for GA aircraft, the report said.

During the 30-year period, mitigations have been implemented at many airports, “especially beginning in 2000 when the FAA’s manual, Wildlife Hazard Management at Airports was initially available to airports nationwide.”

The report also recognized “significant changes” made to the FAA’s updated advisory circular that provides guidance on land uses that can attract hazardous wildlife to the vicinity of airports, including “land-use practices (e.g., aquaculture, agriculture, dredge spoil, etc.), inclusion of general aviation (GA) airport wildlife responsibilities and a new section Airport Procedures for Off-site Attractants that provides step-by-step guidance when proposed land-use changes may provide an attractant to hazardous species.”

No discussion of conflicts between aircraft and wildlife can be complete nowadays without a mention of the “Miracle on the Hudson” accident that occurred on January 15, 2009, when US Airways Flight 1549, an Airbus 320 with 155 people aboard, executed a forced landing on the Hudson River “after ingesting Canada geese into both engines at 2900 feet above ground level after departure from LaGuardia Airport, New York.”

Less known but equally relevant to the report was the “Miracle in the Corn Field,” an accident that occurred on August 15, 2019, when Ural Airlines Flight 178, an Airbus 321 with 234 aboard, landed in the corn 3 miles from Zhukovsky International Airport in Moscow after ingesting gulls into its engines on takeoff. “Incredibly, none of the 389 people were killed in these ‘Miracle on the Hudson’ and ‘Miracle in the Corn Field’ bird-strike events even though both aircraft had been damaged beyond repair,” the report commented.

Here’s an unintended consequence of technological advance: Aircraft powered with newer jet engines put birds at a disadvantage because birds are less able to detect and avoid the quieter turbofan engines.

Human pedestrians take note of a similar peril: The report drew an analogy with “the demonstrated greater ‘strike rate’ for pedestrians and bicyclists (increases of 35 percent and 57 percent, respectively) with electric vehicles compared to vehicles with internal combustion engines.”

The report cited the need for “increased and more detailed strike reporting,” and recommended that the reported information include, as possible, details including “species identification, number of wildlife struck, time and height of strike, phase of flight, and damage to aircraft components.”

When it comes to bird strikes, the sky apparently is no limit: The highest-recorded bird strike by a commercial aircraft occurred at 31,300 feet.

For GA aircraft, the top altitude was 24,000 feet—one of seven strikes that happened above 20,000 feet, six of which caused aircraft damage.

Dan Namowitz has been writing for AOPA in a variety of capacities since 1991. He has been a flight instructor since 1990 and is a 35-year AOPA member.
Go to Dan Namowitz's Profile
Topics: Aircraft, Training and Safety, Accident