Get the app Get the app
Already a member? Please login below for an enhanced experience. Not a member? Join today
News & Media Celebrating a first with a Bicentennial

Bicentennial honors Ohio town’s history on the ground, in the air

First woman to manage a US airport celebrated

Nearly 700 hundred visitors flocked to the Port Bucyrus-Crawford County Airport for a pancake breakfast and fly-in as part of the yearlong Bucyrus, Ohio, bicentennial celebration.

The October 16 event also served as a celebration of Lauretta Schimmoler, a Bucyrus local and aviation visionary. Born in Fort Jennings, Ohio, on September 17, 1900, Schimmoler called the city of Bucyrus home. While her initial career was as a court stenographer and manager of a local poultry farm, her life changed after attending a 1920 flight demonstration by John Macready at McCook Field in Dayton. She saw the commercial value of general aviation to rural communities and began working at the Sycamore, Ohio, airport where she earned her private pilot’s license on August 16, 1930. She eventually convinced city officials to move the airport from Sycamore to the larger city of Bucyrus, where she became not only the new airport’s manager, but the first woman to manage an airport in the nation.

That same year a checkout flight in a Waco 9 brought Schimmoler over Lorain, Ohio, where she saw the lingering devastation of a 1924 tornado. This turned her attention from the commercial and recreational aspects of aviation to humanitarian uses. Leaving behind Ohio’s thriving aviation community where she not only formed the first Ohio chapter of The Ninety-Nines but also served as the first North Central Governor of The Ninety-Nines under fellow aviatrix and personal friend Amelia Earhart, she moved her way west and continually expanded on her idea for aerial medical services, forming what would eventually be called the Aerial Nurse Corps of America. She spent the next several years advocating the benefits of airborne medical services, but it wasn’t until the outbreak of World War II that the U.S. Army saw the necessity of nurse units dedicated to medical air evacuations. 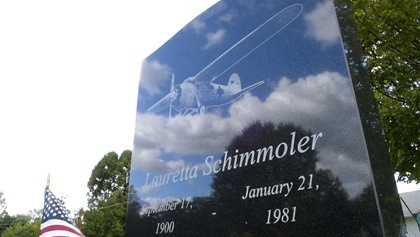 As part of the day’s events attendees were treated to living history presentations of Schimmoler’s many accomplishments with local flight instructor Peg Ballou stepping into the shoes of the historic aviatrix. Also hosted by Ballou Skies Aviation were screenings of Parachute Nurse, a 1942 Columbia Pictures film for which Schimmoler served as a technical director and played the character Capt. Jane Morgan, the commander of a newly formed unit of parachute nurses.

For those interested in present-day aviation innovations, FAA Safety Team presenters where on hand for talks about BasicMed and Part 107 certification. Representatives from Avon UAS and North Coast Drone Alliance, and local RC airplane pilots also attended. Mike Dornbirer drove in with his wife and three children from adjoining Wyandot County to see the warbirds but found the smallest aircraft on display intriguing. “We learned a little bit about the drones which was pretty interesting.”

Pilots flying to the event were provided with shuttle bus service to local businesses, but you can still visit any time for food from Carle’s Bratwurst, and Cooper’s Mill along with unique gifts from Pickwick Place, Crossroads Candles, and Copper Kettle Works.

Carl “Butch” Fisher Jr., owner of Fisher's Ag Service, was among the static displays with one of his company’s five turbine Air Tractors to advocate for one of the most notable uses of GA in the area. “It’s nice to let people know that most of the stuff we do is user friendly. We’re conscientious about what we do and do it right,” he explained. Fisher also brought along his experimental exhibition Canadian Harvard and an AT–6 crossbreed. “Always wanted a warbird…so I thought I might as well build one.” The aircraft took 2.5 years for rebuilding and a year for completing paperwork. “[It’s] my toy,” he chuckled.

The main attraction came in the form of another warbird, Georgie’s Gal, a North American B–25J Mitchell bomber operated by the Liberty Aviation Museum in Port Clinton. “We appreciate everybody that supports us and hopefully we give them something fun to do.” He went on to say he especially enjoys volunteering for in-state events as it allows for better promotion of the museum as well as the associated Tin Goose Diner. (AOPA Content Producer David Tulis visited the Tin Goose Diner and discovered a menu item named for the B–25.) In addition to looking at aircraft, visitors had an option to pay for rides in Kestrel Warbird Experience’s T–6 Checkers as well as one of Columbus Helicopter Tour’s Robinson R44 helicopters.

Bill and Cindy Kuhn, who live within view of the airport, remember the last airshow the city hosted in the 1980s and came to event to show their support and see off Georgie’s Gal.  When asked about what she thought of the event, Cindy Kuhn smiled, “We’re happy to see the planes come back.”