Get the app Get the app
Already a member? Please login below for an enhanced experience. Not a member? Join today
News & Media Computer pilot now being trained for cargo duty

The first computer-flown cargo flights in the system that handles IFR traffic will probably be made in New Zealand, likely to be the first nation to certify fully automated aircraft operations. 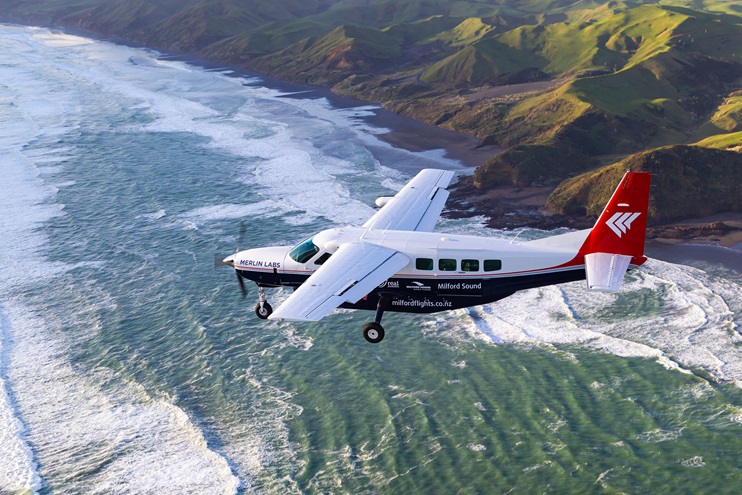 Beechcraft King Airs have logged thousands of hours flown by an automated system that could be certified first in New Zealand before arriving in U.S. airspace not long after. Photo courtesy of Merlin Labs.

Present-day IFR procedures and regulations will be a key to collision risk mitigation for the first flights following certification, likely to be cargo deliveries in Beechcraft King Air turboprops, and with a human pilot serving as a safety pilot, ready to intervene if the digital pilot developed by Merlin Labs gets in over its (metaphorical) head.

Merlin Labs CEO Matthew George, an FAA-certificated private pilot since January and a digital entrepreneur since founding a ridesharing service in Boston called Bridj in 2013, recalled in a recent video chat how a close call he personally experienced drove home the challenge facing his programming team. He recounted an attention-getting moment in the traffic pattern when his Cessna 182’s high wing obscured his view of a banner-tow aircraft that was far too close for comfort and flying the pattern in the wrong direction. Surprises like that are routine in aviation, relatively easy for human minds to react to, but a major challenge for even the most sophisticated digital systems. High levels of automation in the automotive world have led to accidents, some of them fatal. One dozen of these incidents involving Tesla vehicles are now being investigated by the National Highway Traffic Safety Administration and illustrate how state-of-the-art vehicle control systems may have needed more time than was available to interpret novel situations, or unrecognized objects.

The Merlin Labs staff, in various communications with the Civil Aviation Authority of New Zealand, decided to call their system “Murray,” an homage to the comedy series, Flight of the Conchords, a quirky Kiwi comedy that aired in the United States on HBO about a fictional band with an amusingly overstressed and wildly ambitious manager named Murray. Merlin Labs has not programmed its digital student pilot to experience stress, or to arrange hotel accommodations, but the programming staff has spent a great deal of time and effort teaching Murray to talk to humans. This natural language programming enables Murray to converse, not just report, which is a very different thing than an automated weather station that broadcasts current conditions at regular intervals in an obviously artificial voice.

Natural language programming is a heavy lift, because human speech is often messy, or nuanced, or accented. The standardized phraseology of aviation helps, but every pilot knows that radio messages can still be difficult to decipher due to interference, task saturation, fast-talking controllers—any number of reasons that are expected or not. Murray will need to prove itself adept at requesting clarification or repetition when needed, and responding appropriately to instruction.

(It remains to be seen if Murray will be programmed to respond to small talk, the banter between two human pilots that sometimes ensues in the first minutes on a flight deck, before aeronautical operations get underway. Professional pilots are trained to limit their nonaviation conversation during flight operation and focus on the tasks at hand—naturally.)

In the not-too-distant future, Murray may serve as second in command on Part 135 flights, and will certainly need to build time as such before the FAA or other regulators approve solo flights by computer-controlled aircraft with no trained human to watch over them. The system is relatively aircraft-agnostic, and while Murray has been “learning” radio communications at a much slower pace than humans, it is likely the system will breeze through its type ratings in record time.

George said the company’s “crawl-walk-run” approach differs from others building next-generation air taxis and aiming for full digital autonomy, or something very close to that, out of the gate.

“We’re taking a slightly less sexy approach,” George said. “Every system that we test has an onboard safety pilot.”

In effect, Murray is a presolo student pilot, always under the watchful eye of a human who is ready to take over when facing any of the myriad, disruptive surprises that inevitably arise in the air.

But for basic aircraft control in normal operations, Murray has proved very capable, and has logged thousands of hours. A human pilot with that much time and still no solo endorsement would be encouraged to find other things to do, but for Murray, George reported a steady series of successful, small steps toward certification to fly alongside a human pilot, a digital autopilot that can control every phase of flight, from engine start to engine shutdown.

George said the company is nearing the limit of what can be tested and proved in an experimental environment, and Murray needs to get hours in the system under its belt.

“We can’t keep experimenting,” George said. Murray should be able to fly the same instrument procedures as any other pilot, and the next major goal is to prove that. “You can’t do that in protected airspace in California.”

George said the certification basis agreement with New Zealand regulators announced September 16 is a major milestone, representing clearing a crucial hurdle in the certification process “where the regulator can really stop you in your tracks,” particularly when regulators are confronted with a novel technology. George is confident Murray will meet the detailed standards to which New Zealand has now agreed.

His company has also been working with the FAA to prepare the way for validation of that initial certification that will allow Murray-equipped flights in the U.S. national airspace system. The plan is to fly exclusively under IFR, using radar, ADS-B, and the other airspace protections afforded in the IFR system to mitigate the risk of collision.

Murray may eventually be allowed to fly solo cargo missions under Part 135, but programming and equipping Murray to handle emergency procedures without human help, and to earn the trust of national aviation authorities, will come later. George said getting Murray out of the highly protected environment of a test range building time is the key prerequisite to allowing Murray to solo. As with human pilots, experience is the key to earning greater responsibility.

Once certified to operate with a safety pilot, Murray will need an unknown number of hours to advance to the next step. “It’s the really important aerospace work that needs to happen,” George said.

George said the partnership between Merlin Labs and Dynamic Aviation to install Murray in Beechcraft King Airs that was announced in June will focus on defense projects—Murray is likely to “join” the U.S. Air Force at some point, if it has not already in some capacity. Merlin Labs is also seeking employment for its computer pilot with one or more freight carriers, though George said the company is not yet ready to announce where Murray might find work flying unscheduled cargo.

It’s also not clear if the name will stick as Murray makes its way to the United States. George said there is a contingent among the staff lobbying for “Otto,” a reference to the farcical comedy Airplane! that featured an inflatable autopilot built strictly for gags.