CAU’s Mobile Flight Experience features two flight simulators that are free to the public as part of a grand initiative to expose as many people as possible to careers in aviation. This initiative by CAU has been ongoing since 2015 and has yielded exposure to many young adults and school aged children to compensate for the lack of engagement and promotion of aviation careers in many educational environments. California Aeronautical University (CAU) is ready to enter the airshow season in full force. Starting with Air Venture in Oshkosh, Wisconsin, CAU is expected to have bigger presence at the event than in previous years with a large footprint to engage the public. They will be taking their Mobile Flight Experience on the road starting with Wings Over Camarillo in August along with Aerobatic sensation Vicky Benzing. 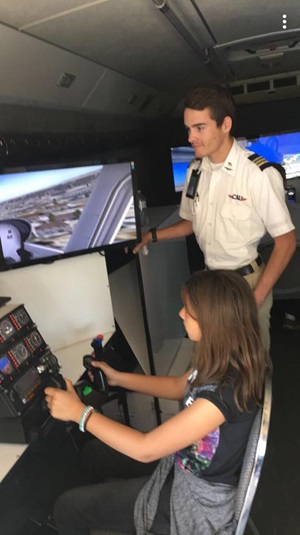 CAU’s Mobile Flight Experience features two flight simulators that are free to the public as part of a grand initiative to expose as many people as possible to careers in aviation. This initiative by CAU has been ongoing since 2015 and has yielded exposure to many young adults and school aged children to compensate for the lack of engagement and promotion of aviation careers in many educational environments. The mobile flight experience will not only be making an appearance at air shows but will continue its high school efforts as well. They have found here is insight needed on how to assist students who have identified they are interested in pursuing a career in aviation, whether it be as a professional pilot or aircraft maintenance technician. This fall CAU is expecting a larger than normal influx of graduating seniors who have found their home at the Bakersfield, California, 22-acre campus location with housing with close access to shared flight line with Meadows Field Airport.

You can see CAU along with aerobatic phenomenon Vicky Benzing at many shows this year. Benzing’s performance in her notorious, bright red Stearman is an aerial display of power and grace in the spirit of vintage barnstorming. Vicky Benzing is notably known as the “Fastest Woman Air Racer.” She flew an astounding 469.831 mph to earn that title. As an accomplished pilot, skydiver, aerobatic performer, and air racer with over 9,000 hours of flight time and over 1,300 parachute jumps, Benzing has a strong passion for everything airborne. This partnership effort between CAU and Benzing has sparked the interest of many to pursue aviation careers. 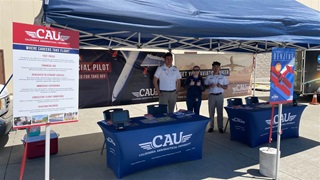 Over the last two years CAU has expanded their offerings with their helicopter program at its campus in the greater Phoenix, Arizona, area and has plans to eventually offer helicopter training in California at its Oxnard location. “Serving our students all over the nation has been exciting. We greatly need experienced, well trained motivated pilots entering the industry and doing our part to facilitate that has been and awesome experience,” said CAU President Matthew Johnston. CAU is expected to have the biggest influx of graduating seniors it has had since its inception and for those that are looking for administrative positions in the aviation sector, CAU offers a Bachelor of Science in aviation studies as well as a graduate programs with its Master of Aviation Science and Master of Business Administration.