Wondering how your students compare to other CFIs regarding their pass rates on practical tests? Or how your overall flight training operation compares? Well, we can help shed some light on the subject.

As a part of the FAA’s yearly U.S. Civil Airmen Statistics reporting, the pass rates on the issuance of specific certificates are reported every year. There are lots of smaller details that can be dug into, but when we take a general look at some of the most common certificates issued, we can see some trends. A review of the data also can allow CFIs and flight training organizations to compare their own experiences with their customers to how the rest of the country is doing. 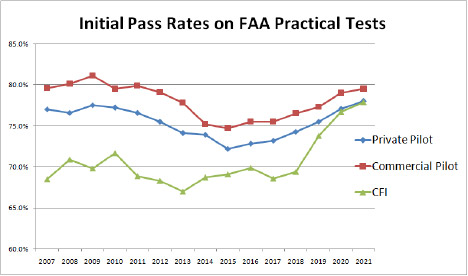 Digging deeper into the data, and in the table below, we see a couple of standout points of interest.

When we look at the pass rates for private and commercial certificates, we see a pretty stable range over the past years. In fact, the variation is only a few percentage points at any point. But that can also be taken into some context also.

For example, the pass rate in 2021 for private pilot certificates was 78 percent. If we applied that same percentage of passing from our low year of 2014 (which had a pass rate of 73.9 percent), it would mean more applicants needed to retest. This retesting need incurs an additional workload for the designated pilot examiners/FAA inspectors to retest applicants who didn’t originally pass. A higher pass rate helps affect other things, such as examiner backlogs for testing scheduling.

We can see how this would affect any of the test rates on the three main tests represented in this table.

In general, the pass rates on the private and commercial pilot certification issuances are remaining relatively stable over the years. But that doesn’t mean we couldn’t try to improve it, right? 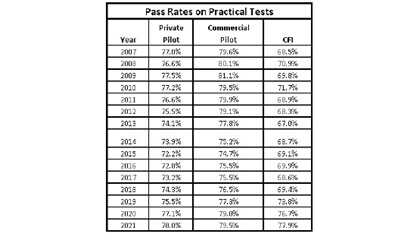 The data shows that the pass rate for initial CFI certificates has historically hovered somewhere just shy of the 70 percent rate. This is certainly much higher than many of the myths would have us believe. The pilot community seems to spread the notion that most CFI practical test applicants fail on the first try. The data certainly proves this wrong.

In fact, we see an interesting uptick in the pass rate overall on CFI practical tests in 2019, 2020, and 2021, with the most recent years’ pass rates that are almost equal to that of private pilot certificate testing efforts.

How or why have the CFI pass rates come up? I don’t know, but it certainly would be interesting if they continued that way. Or does it mean that we have seen a relaxing of the adherence to standards on the CFI practical tests?

It is an interesting correlation that we tend to see pass rates on practical tests tend to dip when airline hiring is highly active. The postulation is that as airlines hire CFIs actively away from flight training providers, flight training providers are left with less-experienced CFIs. As CFIs stay in their teaching positions longer, such as was seen in the mid-2000s when hiring was slowed, and again in 2019 and 2020 as airlines stopped hiring during the COVID-19 pandemic, pass rates actually increased. It seems logical to think that when CFIs do their jobs longer, they get better at it, and as a result, their students are more likely to pass. When we look at recent data, we see an increase in pass rates during 2019 and 2020. It will be interesting to see if the pass rates dip again over the next year as flight training providers experience heavy turnover of CFI populations caused by highly airline active hiring over the past six months.

Of some interest for those who remember when more tests were conducted by FAA inspectors (staff), we can see from the following table that for at least the last decade that is no longer the case. 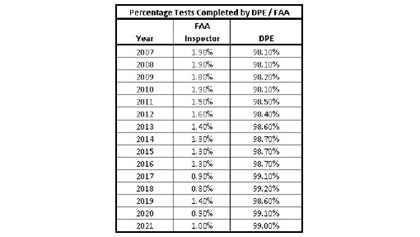 We used to do some comparisons between the pass rates on tests where applicants were more likely to pass with a DPE or with an FAA inspector. Continued delegation of testing efforts for airmen throughout our system to DPEs means realistic comparison between the two no longer holds much validity for analysis. What it does show us, however, is that DPEs are doing the bulk of the work of testing our future pilots who will serve in any number of commercial aviation roles.

I hope that if you are a CFI or flight training provider that you can contextualize this data into your own operations. If you aren’t meeting these average standards, figure out why and how you can step up the game. If you are exceeding them, try to determine what it is you are doing that others may not be doing and keep doing it. If you can, share those best practices with others. Together, sharing our best practices and our data we just keep making our training system more efficient, and more effective at successfully training the safest next generation of pilots possible.