Get the app Get the app
Get the latest news on coronavirus impacts on general aviation, including what AOPA is doing to protect GA, event cancellations, advice for pilots to protect themselves, and more. Read More
Already a member? Please login below for an enhanced experience. Not a member? Join today
Pilot Resources Aircraft & Ownership Aircraft Fact Sheets American Champion Decathlon 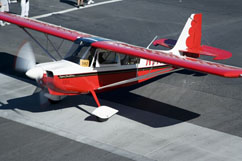 When Champion Aircraft Company at Osceola, Wis., entered the trainer marketplace with the Citabria (airbatic spelled backwards) I contemplated taking on a dealership. However, I did have some reservations about this new airplane. Its G tolerances and controllability around all three axes were my biggest concerns. To ease my mind on both issues, Bob Brown, Champion's president, invited me to visit the factory and fly the airplane.

A lengthy guided tour of the plant proved to me that the airplane was sturdy enough for basic aerobatics, although it was somewhat short on the negative G side for outside maneuvers. After the tour, I strapped into a Citabria and took it up for an evaluation. The performance was good. It got off after a short roll, had a good rate of climb, and up to about 60 degrees nose up, it rolled rather well. However, from there to inverted flight, and through a slow roll, it was very heavy on the controls. My written report was critical of the airplane's shortcomings, but it stated that I was pleased that Champion had made the bold step - certificating an airplane as aerobatic at a time when the industry definitely needed one.

When Champion certificated the Decathlon several years later, my Citabria report may have been of some help to the company. Most every suggestion I'd made was incorporated in the Decathlon. My second evaluation visit to Osceola was much the same as the first, but my appraisal of the Decathlon was a different story. After thoroughly checking it out, I stated that, in my opinion, it was the best basic aerobatic trainer ever built.

The Decathlon is the next step up from simple positive-G aerobatic airplanes like the Aerobat or the Citabria. It has what country and western stars call crossover, the ability to please more than one crowd at a time. It can be a trainer and Sunday fun airplane, or it can do serious airshow work. Patty Wagstaff is among the many pilots who have thrilled crowds using a Decathlon.

Now, after 19 years and somewhere around 10,000 hours, and though other excellent trainers have come on the market, I still prefer the Decathlon. As the years have passed, some weak points have shown up, as they have in any airplane ever built, but with Airworthiness Directives, and American Champion's modern improvements, the Decathlon will be around for a long time.

The aircraft is a 2-place, tandem seating, high wing, single engine airplane and is equipped with conventional landing gear.
This airplane is certificated in the normal and acrobatic categories. See the airplane’s P.O.H. for approved maneuvers in the acrobatic category. The airplane is approved for day and night VFR operations when equipped in accordance with F.A.R. 91 or F.A.R 135.

The airplane is powered by a horizontally opposed, four cylinder, direct drive, normally aspirated, air cooled, fuel injected engine. The engine is a Lycoming Model AEIO-320-E2B and is rated at 150 horsepower.

Welded aluminum fuel tanks are located in the inboard section of the wing. Two 20 gallon tanks are standard. Fuel quantity is read from mechanical float type gauges located in the fuel tanks. Fuel tank air spaces are interconnected and positive venting is provided through a tube which protrudes from the bottom of the left wing just outboard of the tank. A check valve is provided at the vent outlet of each tank to minimize inverted fuel loss. To proved limited fuel in the inverted position, a shrouded 1.5 gallon header tank is located in the forward cabin under the instrument panel.

The electrical system is powered by a 60 amp alternator and a lead-acid battery.