Get the app Get the app
Get the latest news on coronavirus impacts on general aviation, including what AOPA is doing to protect GA, event cancellations, advice for pilots to protect themselves, and more. Read More
Already a member? Please login below for an enhanced experience. Not a member? Join today
Pilot Resources Aircraft & Ownership Aircraft Fact Sheets Beechcraft Sport 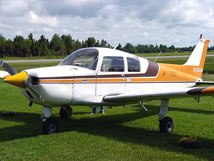 Last year I called the Cessna 152 the "last affordable airplane" and reported that an IFR-equipped model goes for $30,000 on the used market (see " Budget Buys: The Last Affordable Airplane?" August 2001 Pilot). That was before I flew a $28,000 IFR-equipped Beechcraft Musketeer Sport.

The 150-horsepower Musketeer III A23-19 Sport has a panel large enough for IFR avionics and a cabin wide enough to assure you'll still be "just friends" with the passenger when you land. Yet, its four-seat capacity costs about the same as a two-seat Cessna 152.

Some think it is so slow (most owners report 104 KTAS average cruise) that it is justly compared to a Cessna 152. I saw 100 KTAS during a flight at 2,500 ft from Augusta Municipal Airport, Kansas, in a Model B19 owned by Ken Williams of nearby Wichita. It was built in 1966, the first year the Sport was offered. Although it's really a two-seater, an optional bench in the rear adds passenger seating.

It's the perfect airplane for Williams. "It feels solid and stable. I'm a chicken," he confessed, "and I like it because it is simple, stable, with a good reputation and an engine that is hard to break. It feels safer in turbulence than other models."

Sure, this newly minted 100-hour private pilot looked at other models before making his decision. He found that the Musketeer was half the price of many other models.

Yes, the 180-hp Sundowner, the model created when Beechcraft renamed the unsuccessful Musketeer, was on Williams' short list. But the Sundowner's 116-kt cruise speed didn't seem all that much faster for the money. If Williams has any model envy, it would be for the Beechcraft Sierra 200, another refugee from the Musketeer family, with retractable gear and a 200-hp engine that produces 145-kt cruise speeds. But now you're talking twice the money.

Williams is quite happy with his Musketeer Sport. His work as a psychiatrist requires him to travel a circuit to several outlying hospitals ranging from 75 nm to 260 nm from Wichita. "Yes, it is relatively slow, but it is perfect for the distances that I fly." With winds typical of Kansas, Williams is used to seeing 85-kt groundspeeds in one direction and 140 in the other on most trips. He did take the Musketeer to Corpus Chrisi, Texas, once to pick up his two daughters: Although the aircraft carries a bladder-busting 57 gallons of fuel while only burning nine or 10 gallons per hour, Williams stopped both ways "just for safety."

Williams offered a demonstration flight in his aircraft one gusty Kansas day last year. Williams had praised the aircraft's stability, and I found his praise was well placed. (Some owners have complained about poor longitudinal stability, blaming the use of a stabilator design.) While it has a crisp roll rate that makes for responsive fingertip turns, the Musketeer won't bank unless you want it to. I pulled the nose high and let go, discovering that the aircraft returned to level flight in four oscillations. It's a good IFR platform, as the saying goes. Williams has an excellent trainer to use for his instrument rating and for light IFR flying. As for other traits, such as behavior in stalls and slow flight, there is nothing scary to report.

Landings need a little discussion, however. Williams warned me that if I landed with too much speed or without enough flare, the stiff rubber shock absorbers in the trailing-beam landing gear might set up an expensive porpoising incident that neither he nor I would soon forget. With that warning, I came in nose high on three landings and never had a problem. I was especially grateful for the Musketeer's nice manners in — by my East Coast standards — the gale-force crosswinds present that day.

The aircraft is powered by a Lycoming O-235-L2C and is rated at 115 horsepower. It is a four cylinder, normally aspirated, direct drive, air cooled, horizontally opposed, carburetor equipped engine.

Fuel tanks are located in each wing and have a capacity of 15 gallons each for a total of 30 gallons. Fuel is fed from the fuel tanks through a fuel selector valve in the center floorboard and then through a strainer to the engine-driven fuel pump. An electric fuel boost pump is available for use when needed. Fuel quantity is measured by float-operated sensors located in each wing tank system.

The electrical system is powered by an alternator and a 12-volt 25 amp-hour battery. The system circuitry is a single-wire, ground-return type, with the airplane structure used as the ground return.