Get the app Get the app
Get the latest news on coronavirus impacts on general aviation, including what AOPA is doing to protect GA, event cancellations, advice for pilots to protect themselves, and more. Read More
Already a member? Please login below for an enhanced experience. Not a member? Join today
Pilot Resources Aircraft & Ownership Aircraft Fact Sheets Beechcraft Sundowner 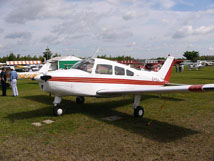 The Sundowner served for years as the mainstay of the Beech Aero Club network. As such, the airplane has gained a reputation as a stepping stone to Beech Aircraft’s dream machines, the Bonanza and Baron. This image is reinforced by an optional item that has long been included on the airplane’s equipment list: a bogus gear selector that is intended to help pilots transition to complex aircraft.

However, a close look reveals qualities that belie the picture of the Sundowner as merely a convenient waypoint on the journey to bigger and better things.

No, the Sundowner is not fast. It is between 10 and 17 knots slower at normal cruise speeds than the Piper Archer, its closest competitor in the four-place, 180-hp market.

What the customer gets for his money is quality and rugged construction. The airplane is stressed to six positive and three negative Gs, and it has two more bulkheads in its fuselage than either the Piper or the Cessna singles. The Sundowner has a heavy forged aluminum spar with a fuselage carry-through structure that resembles a truss in the Brooklyn Bridge. Also, the main landing gear is attached directly to the spar, not to stiffeners as they are on other airplanes.

The Sundowner is a sturdy airplane, indeed. Add cowling strakes, a ventral fin under the rudder, fairings ahead of the stabilator, a G-meter, quick-release doors and a snappy checkerboard paint job, and you have an airplane certificated for aerobatics.

The Sundowner is a big airplane. The wide fuselage takes its toll in airspeed, but provides a roomy cabin with ample elbowroom and legroom for all aboard.

The tanks hold 57 gallons of usable fuel, providing a range of more than 550 nautical miles at 65 percent power. However, if you fill those tanks, you will not be able to fill the seats – unless, of course, you are only taking the kids along.

The Sundowner is a comfortable airplane. All four seats have three-position backs. The pilot sits slightly ahead of the leading edge of the wing, and the wrap-around windshield and large side windows offer excellent visibility.

The ailerons are crisp, and very little rudder is needed to keep the ball centered. The ailerons are a modified friese design. The leading edge of the raised aileron protrudes slightly into the airstream at the bottom of the wing, counteracting the yaw created by drag from the lowered aileron. In steep turns, though, the nose drops quickly, and it takes a good tug on the yoke to maintain altitude.

Good pilot technique is required when landing a Sundowner, since its nose gear is longer and its flaps are not as effective as those on the Archer or Skyhawk. Keeping the proper approach speed is critical – 68 knots on final approach with full flaps or 80 knots with flaps retracted. The Sundowner’s wide landing gear also is very forgiving of poor pilot technique in a crosswind.

The sundowner has done such a good job in its role as a transition aircraft that it has been overlooked as a good airplane in its own right.

The airplane offers a balance between performance and quality of construction. Speed becomes less of a consideration when you sample the airplane’s comfortable cabin and nimble handling qualities. The Sundowner deserves a close look by any pilot in the market for a four-place single-engine aircraft.

The aircraft is powered by a Lycoming O-360-A2G and is rated at 180 horsepower. It is a four cylinder, normally aspirated, direct drive, air cooled, horizontally opposed, carburetor equipped engine.

Fuel tanks located in each wing leading edge have a capacity of 30 gallons for a total capacity of 60 gallons when full. A visual measuring tab below the filler neck of each tank allows the tank to be filled to a 15- or 20-gallon capacity. Fuel is fed from the desired tank to a fuel selector valve in the center floorboard and then through a strainer to the engine-driven fuel pump.

The electrical system is powered by an alternator and a 12-volt, 25 amp-hour battery.