Get the app Get the app
Get the latest news on coronavirus impacts on general aviation, including what AOPA is doing to protect GA, event cancellations, advice for pilots to protect themselves, and more. Read More
Already a member? Please login below for an enhanced experience. Not a member? Join today
Pilot Resources Aircraft & Ownership Aircraft Fact Sheets Cessna 170 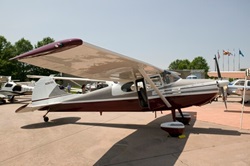 A new generation of pilots who grew up with nosewheels are curious about tailwheels and are discovering that the four-seat, 145-hp 170 is an economical and versatile airplane in which to make the transition. Owners of 170s speak glowingly of minimal maintenance and performance equal to Model 172 Skyhawks that can cost many times more.

The 170A had a tapered metal wing with squared-off tips, a single wing strut and two 21-gallon tanks. The flaps were enlarged and could extend to 50Âº. (Flaps on the 170 could only extend to 30Âº.) Cessna also fitted the Model 195 dorsal fin to the 170A to increase directional stability. There were 1,522 170As built during the three year production run.

The final and most popular version of the 170, the 170B, was introduced in 1952. Cessna incorporated a number of changes in the 170B to improve handling. Whereas the 170 and 170A wings had virtually no dihedral, the 170B wing was given three degrees, and twist was added from the wing roots to the tips. The 170/170A hinged flaps were changed to a semi-Fowler design on the 170B. The flaps could extend to 40Âº. The shape of the horizontal stabilizer and elevator was altered, the trim tab enlarged and a mass balance inserted in the tips of the elevator to relieve the heavy stick forces characteristic of earlier models.

A Cessna 170 that has been gathering dust on a remote corner of the airport may represent a potentially good buy, but there could be some high hidden costs if airworthiness directives dating back years have been ignored. Someone considering the purchase of a 170, or any aircraft that has been out of license for some time, should get a complete list of all applicable airworthiness directives, then check it against the aircraft engine and airframe logbooks to see if the inspections or modifications have been performed. Factory service bulletins also should be reviewed, but, unlike airworthiness directives, they do not require mandatory compliance.

When it pertains to the 170’s accident record, lack of overall or recent experience in the airplane is a factor in many of the mishaps, but not all. The lesson seems clear. The 170 has no treacherous characteristic that are revealed at the critical moment in a landing approach or takeoff roll. It simply has a tailwheel, and tailwheel aircraft require more precise control on the ground than do aircraft with nose wheels.

The airplane is certified in both the normal and utility category. Spins and aerobatic maneuvers are not permitted in normal category airplanes. When in the utility category certain maneuvers including spins are permitted as per the aircraft’s P.O.H. The aircraft is approved for day and night VFR/IFR when equipped in accordance with F.A.R. 91 or F.A.R. 135.

The aircraft is powered by a six cylinder, horizontally opposed, normally aspirated, direct drive, air cooled, carburetor equipped engine. The engine is a Continental Model O-300-A and is rated at 145 hp.

Fuel is supplied to the engine from two 21 gallon tanks, one in each wing. Fuel flows by gravity from the two aluminum tanks through a four-position selector valve and fuel strainer to the engine carburetor. A direct reading, dampened, float-type fuel quantity indicator is mounted in each tank at the wing root inside the cabin.

Electrical energy is supplied by a 12-volt, direct-current system powered by an engine-driven, generator. A 12-volt storage battery serves as a standby power source.