Get the app Get the app
Get the latest news on coronavirus impacts on general aviation, including what AOPA is doing to protect GA, event cancellations, advice for pilots to protect themselves, and more. Read More
Already a member? Please login below for an enhanced experience. Not a member? Join today
Pilot Resources Aircraft & Ownership Aircraft Fact Sheets Maule 4 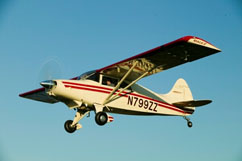 The first Maule ever certified is back, but not as it was certified. Maule Air has decided to go retro and bring back the company's first certified model, created by late founder B.D. Maule, the M-4, but with improvements that include the basic wings from the current MX-7. They use the same airfoil design as a Piper Cub. Consequently, recertification is required for the M-4-180V (180 refers to the 180-horsepower Lycoming O-360 engine). Its proof once again that with a few spins of the parts bin, Maule Air can create a new model in just a few weeks.

During development in the 1950s the model was known as the Bee Dee Maule and won a prize at Oshkosh for being one of the best new Experimental models produced. By the time the airplane was certified, using a 145-horsepower Continental engine, the name had changed to the Maule M-4 Jetasen, a somewhat curious moniker. The word Jetasen actually meant jettison, as in jettison something speedily, said Ray Maule, B.D. Maule's son, who is credited with bringing the M-4 back to market. There are still 69 Jetasens on the FAA registry, and more than 200 M-4s of all models. Excitement over the space program was at its peak in the 1960s, and the Maule model names of the era reflect that: There was the M-4-220 Strata Rocket using a 220-horsepower Franklin engine; the M-4-210 Rocket; and the Maule M-4-180 Astro Rocket. Jettison was a term from the space program, too: Escape rockets were jettisoned from capsules carrying astronauts when no longer needed for rescue.

B.D. Maule's design philosophy for that first M-4 is explained on the company's Web site: "He initially designed the new aircraft as a high-powered utility aircraft for aviators like himself, serious pilots who fly for the love of it. He envisioned the need for a four-place 'go anywhere' airplane that could be used for many purposes, including bush flying in unimproved and rugged environments. Thus, the design evolved as a high-wing monoplane taildragger with a welded steel-tube-truss fuselage, metal-spar wing, STOL [short takeoff and landing] characteristics, and good range and speed."

There are minor differences in the model offered then compared to the new M-4. The older aircraft was a four-place model, while the new M-4 provides side-by-side seating for two, and Maule officials consider side-by-side seating a major advantage in the tailwheel market where most competitors offer tandem seating. Compared to today's M-7 models that evolved from the M-4, the M-4 cabin is not as long and there is no cargo door, but thanks to removal of the backseats there is plenty of hauling room. The tail is rounded as it was in the 1960s, compared to today's flat-top tail. The horizontal stabilizer is more elliptical than the M-7's trapezoidal-shape stabilizer. Except for a couple of extra inches of cabin height on today's M-7 models, the fuselage is identical in cabin width, design, and construction. The flaps for the M-4 are borrowed from more modern Maules: There is a minus 7-degree flap setting that the company says reduces drag for increased cruise speed. Other settings are zero, 20, and 35 degrees. The flaps are mechanically operated by a lever between the seats.

Certification flights had not been completed when I visited the Maule factory for a test flight, so final performance numbers are yet to be determined. During takeoff with Ray Maule aboard, I found forward visibility excellent; the aircraft climb-ed initially at 1,000 feet per minute before tapering off to 700 to 800 fpm. Maule said 700 to 800 fpm is typical. Maule and I climbed to 2,500 feet for a cruise-speed check, where I asked him to set power and fly the speed checks so that he could coax the aircraft to its best performance. At full power we averaged 116 knots true airspeed, while at a more economical cruise at 65-percent power the true airspeed was 108 knots. That's what the company promises in its brochures.

The aircraft had been rigged to perfection. The M-4 was content to mush straight ahead, with wings level and nose high, in an approach-to-landing stall with full 35-degree flaps. I had to try again, using an exaggerated pitch angle, to get the shuddering and nose-drop typically seen during a full stall in most light aircraft. The power-on stall provided plenty of warning buffet with the aircraft still under control, followed by a gentle break; again, there was no wing drop-off.

The key to any flight test is, of course, the landing. For that we used Ray's personal grass strip at his home in the Georgia-like setting described in the song Georgia on My Mind. Pines surround the property and one can imagine moonlight pouring through them, like the song says. A wildlife lover at heart, Ray has installed automatic feeders around a large pond and uses them to keep ducks and swans. As we took a break from landing practice, a swan swam toward him like a Navy destroyer, eager to be fed. Ray has taken down a few of the 60-foot pines at one end of the runway to facilitate takeoffs and landings from the 2,000-foot-long strip. I found the aircraft easy to land despite little tailwheel experience in the past year. Because of its earlier certification the speeds are shown on the airspeed indicator outer ring in miles per hour, and final is flown at 65 mph (56 knots).

Another flight was made in formation to take the photos for this article. Formation flight requires precise flying if you want to keep the photographer happy, and it is best done in a very stable aircraft: The M-4 proved to be that. Formation flying also puts visibility to the test. Frankly, I could have used a bit more visibility and noticed distortion when looking through the corner of the windscreen, something that would be important to pilots in cruise flight when scanning for traffic. However, visibility when landing and taking off was good. My takeoffs and landings consumed on average between 400 and 500 feet. The ads for the first M-4 said that it could be landed on a football field. Maybe B.D. — who routinely took off in both M-4 and M-5 Maules inside the factory and was airborne before reaching the hangar door — could do it, but not I.

At this writing, certification paperwork had been sent to the FAA, and test-flying was in progress: An FAA-designated engineering representative was about to be hired for the task. Consequently, I'll stick to reporting only the numbers that have been proven thus far. The demonstrator used for this test makes good on a promise to have a useful load of 900 pounds — it is 903. The payload (what you can carry with full fuel) is 465 pounds; so two 200-pound guys can bring a 30-pound suitcase each. Four gas tanks — two tip tanks and two mains — come standard on the M-4 and hold 73 gallons of usable gas, or enough to stay airborne for nearly an entire workday. The company at this writing has ballpark figures for stall speeds of 45 to 50 mph; actual numbers are yet to be determined. The wingspan is not in doubt; it is 30 feet and 10 inches, while the fuselage length is 22 feet. It will easily fit into any hangar.

The list of standard equipment includes a six-pack gyro panel, a Garmin GNC 250XL GPS/com with moving map, a Garmin GTX 327 digital transponder, an intercom, and interior and exterior lighting. While both the fixed-pitch and constant-speed propeller models come equipped for VFR flight, they have plenty of room on the panel to be equipped for IFR flying.

Ray Maule was asked why he decided to bring back his dad's first airplane. "We've seen similar aircraft that offer tandem seating come into the marketplace, like the Aviat Husky, the Cub Crafters Top Cub, and the American Champion Scout. We think people want side-by-side seating in an airplane. For one thing, that makes a better trainer because both pilots can see the instruments. Insurance will be less because there are only two seats.

"The aircraft is versatile in that it can be mounted on skis or floats, and it will have an autopilot in the future. The M-4 was certified for an autopilot in the past," Maule said. He said the M-4 is one of the best-handling aircraft in the Maule fleet, a comment borne out by the test flight. His son, Brent, director of sales for Maule Air, added: "At Oshkosh we saw that everybody is going retro, including car manufacturers, and bringing back older models." The "back to the future" movement also reduces certification costs, making new offerings more affordable.

This very model, an M-4 with a 180-horsepower engine, has been on the market before. If you buy one, tell fellow aviators you're riding the Astro Rocket.

The electrical system is a 14 or 28 volt, 50 amp, direct current, single wire circuit using the airplane structure as a ground return to the battery. The lead plate type storage battery is rated at 12 or 14 volts.