Get the app Get the app
Get the latest news on coronavirus impacts on general aviation, including what AOPA is doing to protect GA, event cancellations, advice for pilots to protect themselves, and more. Read More
Already a member? Please login below for an enhanced experience. Not a member? Join today
Pilot Resources Aircraft & Ownership Aircraft Fact Sheets Maule 5 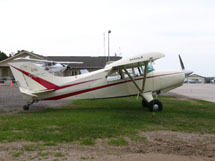 There’s something awkward about a STOL takeoff demonstration when viewed from the ground, as the ship claws for altitude at an almost indecent angle. If you’re inside the cockpit, you eyeball the angle of the wing in relation to the horizon and pray a little. But done properly, by a semi conservative pilot, the STOL exercise becomes more fun than fright.

A total of 472 Maule aircraft had been built by the Moultrie, Ga., factory when we flew the new M-5. Yet the factory is gearing up to produce 120 in 1974 alone. On February 1, they were already back-ordered into November. This belated popularity has come about because of steadily growing acceptance of the Maule by both bush pilots and law-enforcement teams.

The Maule design first flew in 1958, according to Geiger, and went into production in 1962. A simple, rugged design, combined with a fine, slow-speed airfoil, has produced a workhorse taildragger that is selling well on today’s market.

Five feet shorter in span than a Cessna 180, and more than three feet shorter in length, the M-5 is not a large airplane; however, it packs plenty of power and payload. Dual controls, dual brakes, sensitive altimeter, cargo door, primary flight group, an basic avionics wiring are standard on the M-5.

If you want to disturb Joe Geiger’s aplomb, just look down you nose at the M-5’s “old-fashioned, fabric covered fuselage and tail feathers.” Even before you get a chance to ask, he’ll point out that the fiberglass covering will outlast the metal on the wing and the tubing of the fuselage.

The M-5 has a rugged steel-tube structure, similar to that of the Cessna 172 seaplane version, with two Â¾ inch tubes from the leading edge of the wing root to the center of the firewall. Painted black, they don’t affect visibility, and after an hour or so in the ship you
don’t even know that they’re installed. These tubes do double duty as handholds.

Visibility over the nose is more than adequate. You can see the ground 50 feet in front of the prop, so no S-turning is required. Cabin head room is 35 inches. The front seats do not fold forward. Eve-level is about even with the bottom of the wing.

The windows do not open in the Maule, but there’s a simple vent system, cut into each front window, that will scoop in more air than you’ll ever need. In addition, the regular cabin air intake should be adequate even on hot days.

If you’re not accustomed to flying a tail dragger, the Maule would present a few problems in transition. However, use of the conventional tailwheel saves the weight, drag and complexity of a nose gear an adds to the Maule’s performance.

Despite the M-5’s stubby fuselage, I’d consider its ground-handling characteristics to be excellent. The Cleveland brakes are smooth and matched well with the oversized tires on the aircraft I flew.

I treated the new M-5 like a lady and, with leisurely power application, made a normal takeoff from Brackett Field, La Verne, Calif. Empty weight was 1,361 pounds because of a heavier paint job and the larger tires.

For a brand new aircraft (41.7 hours on the recording tach) the controls were surprisingly smooth and well balanced.

Our rate-of-climb indication was 1,200 fpm. First power reduction was to 25 in. mp/2,500 rpm, with a 90-mph climb. Geiger explained that the rate of climb would increase at a slower climb speed, but over-the-nose visibility is reduced. On full STOL takeoffs, the deck angle is more than 30 degrees at 45 mph, and you don’t see anything over the nose. This same limitation, however, applies to all STOL aircraft on max-performance takeoffs.

The M-5 is really fun to fly. Control touch is light, rate of roll excellent, and there’s more power available than you’ll ever need with a light load at low altitudes

With just two of us up front, the Maule was impossible to spin. Geiger said that partial spins, up to a quarter of a turn, could be made with a load in the rear but that the ship would pop out almost as soon as the spin was entered.

The M-5 slips nicely, and even with full flaps there is no tendency to blanket the tail. In a severe slip, you run out of rudder with ample aileron control remaining.

With its relatively short fuselage, the Maule is sensitive to both power and flap changes and requires retrimming with the tab wheel. The nonstandard rudder trim, actually a bungee attached to the right rudder pedal, is handy for cross-country flight but not necessary for power changes in the pattern, since rudder pressures are fairly light.
The impressive slow-speed performance of the M-5-210C is matched by good top speed. Maule calls for 160 mph at 65% power; that’s 2,600 rpm and 22 in. mp (full throttle) at 8,000 feet. This is predictable with the relatively short span and small frontal area.

Geiger recommends an old-fashioned “dead stick” landing approach with full flaps and 50 mph indicated. He does not rely on a blast of power to stop his 500-to-700 fpm rate of sink, but has enough speed left for a normal flare and smooth landing.

Specifications call for a landing roll (at full gross weight, over a 50-foot obstacle), of 390 feet. Using Geiger’s recommended 50-mph approach speed, I was able to land into a less-than-5-mph wind, on the slightly downhill Cable-Claremont Airport (Upland, Calif.), and come to a stop in under 350 feet. I skidded the big tires just a little, but there was little or no tendency for the tail to come up.

The M-5 is a good, hard-working airplane. Since I began to learn to fly in Cubs, taught in Stearmans, and eventually flew C-46s, at least 50% of my flight time has been in taildraggers, so I may be a bit prejudiced in their favor. However, I believe it said it all about the new M-5 when I asked Joe Geiger to let me ferry one west for him. It should be a delightful trip.

The electrical system is a 14 volt, 50 amp, direct current, single wire circuit using the airplane structure as a ground return to the battery. The lead plate type storage battery is rated at 12 volts.