Get the app Get the app
Get the latest news on coronavirus impacts on general aviation, including what AOPA is doing to protect GA, event cancellations, advice for pilots to protect themselves, and more. Read More
Already a member? Please login below for an enhanced experience. Not a member? Join today
Pilot Resources Aircraft & Ownership Aircraft Fact Sheets Maule 6 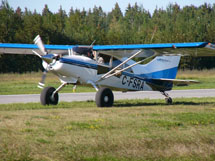 The aircraft is strangely nice looking, neither a show-stopper nor an ugly duckling, though it comes closer to the latter. The nose seems to thin for the boxy rear fuselage and the large tail surface. The gear struts also are wide and utilitarian looking. But it is performance, not looks, that counts in the backwoods.

The 235-hp version is the star performer, and most of the aircraft leave the factory with the large engine, said Dan Spader Sr., aircraft sales manager and chief test pilot. That is the model I flew for this report.

The aircraft is constructed of one-piece welded 4130 steel tubing, covered with Razorback fiberglass coated with butyrate. The wings are all metal with fiberglass tips. Flaps and ailerons are also metal.

The wing on the M-6 has been lengthened from 30 feet 10 inches to 33 feet two inches. Each flap in now 10 feet long, and the ailerons have been moved farther outboard. The flaps have three down positions: 20, 40, and 45 degrees. A bungee system automatically brings the flaps down to 50 degrees as speed slows to 48 knots on approach. If you do not want full flaps, you can leave the handle at 40 degrees. If you need to go around, applying power brings the flaps up to the 45-degree position (you will have to take over with the rest).

Spader said that the flaps also could be used as speed brakes for a fast descent. He noted that there are no restrictions against slipping with full flaps either.

The added lift from the longer wing naturally produced a disadvantage – loss of cruise speed. Maule ingeniously solved this problem by adding negative flap. Lower the flap handle beyond the neutral position, and you get seven degrees flaps up. The flaps tilt up at only a slight angle; but when the negative position is cranked in the air, the airspeed indicator gains a not-so-slight five knots (varies with altitude).

For my introduction to the M-6, Spader and I taxied the bright red and white aircraft out of the line of Maules ready for delivery and trundled down the ramp. A few hundred feet down the ramp, Spader turned the aircraft back toward the rows of aircraft for our runup. He pulled back one notch of flaps and shoved the throttle forward. Before I could yell, “Watch out for your inventory,” we were off the ramp. The tailwheel hit the pavement and we bounced into the air, climbing out well above the rows of Maules at 61 knots, best angle of climb

Spader said the takeoff distance has been measured at 45 feet; landing roll, 100. (Don’t count on performance like this, of course, with a pilot of average skills and any sort of load.) With the certification of the M-6, Maule produced a full set of performance charts, something it had never had before.

When I made my first takeoff – on Spence’s Runway 32, not the ramp – the little Maule was off practically before I had shoved the throttle all the way in. If you want real short-field performance, hold the brakes as you push the throttle in, with one notch of flaps cranked in already, and pull in 40 degrees as you rotate. The M-6 pops right off the runway from practically a dead stop.

Landings were equally impressive. The M-6 floated in so slowly on final (at 44 to 48 knots, the flaps extending the full 50 degrees as we glided down) that I could have counted all the rows of cabbage stretched out in the field below us. “Drives tower operators wild,” said Spader, as we hung over the threshold. Landings were surprisingly easy, despite my being rusty in tailwheel touchdowns.

Climbing out to altitude was not as dramatic as the landings and takeoffs, but the M-6 managed to maintain a healthy 1,000 fpm climb through 9,000 feet. We were lightly loaded and the day was not too warm – the outside air temperature was 40ÂºF by the time we reached 11,000 feet. Leveling off for cruise at 11,000 the aircraft was indicating 117 knots. 65% power gave us 112 knots indicated; and 60% power, 104 knots. Small tires and speed fairings can add three to five knots to cruise speed, compared with the performance with large tires, said one Maule owner.

On the opposite end of the scale, power off, we stalled well below the 35-knot indication. With power on, there was a definite buffet on the rudder pedals, which Spader said is caused by the slipstream over the elevator, as the aircraft stalls at just less than 45 knots. Control response was good and the stall was gentle.

Maules truly are specialized aircraft, and they obviously appeal to those who have need of a utilitarian airplane. With the M-6 you can take off or the back country and land on a short strip. You can load up through those cavernous doors with bales of hay, a full day’s catch or whatever 500 pound load needs hauling out and take off from an appropriately small strip. Or, if you want, you can use it simply to amaze the folks at the airport when you bounce it off the tailwheel before you roll past the first runway light.

The electrical system is a 14 volt, 50 amp, direct current, single wire circuit using the airplane structure as a ground return to the battery. The lead plate type storage battery is rated at 12 volts.