Get the app Get the app
Get the latest news on coronavirus impacts on general aviation, including what AOPA is doing to protect GA, event cancellations, advice for pilots to protect themselves, and more. Read More
Already a member? Please login below for an enhanced experience. Not a member? Join today
Pilot Resources Aircraft & Ownership Aircraft Fact Sheets Maule 7 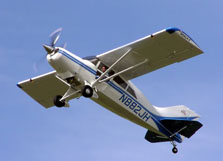 The plethora of models stems from one basic workhorse of a design. The late B.D. Maule developed a four-place aircraft — certificated in 1961 — and put it into what has become a 37-year production run. That basic airframe was joined by a five-place model in 1981. Over the lifetime of the airplane, 25 models have emerged from just these two airframes — most of them tailwheel designs. Currently there are 12 models available; five of them, including a turboprop, have nosewheels. FAA officials call Maule Air, located at Spence Airport near Moultrie, Georgia, the Potato Head Factory (after the Mr. Potato Head toy) because of the numerous options. You can put a lot of faces on the standard Maule potato. Every time a model gets a new option, such as the spring-aluminum landing gear, it gets a new name.

Obviously the design has sold well. That's because Maule airplanes have a reputation for hauling a heavy load off a short runway and thereafter cruising at anywhere from 100 knots to 170 knots — depending on the model. Sales average 65 to 70 a year, good economy or bad, thanks to prices that hold strong appeal, especially for the light of wallet and the value seekers. At this writing, there are 50 aircraft on order from customers in Mexico; South Africa; Switzerland, Poland, and other countries in Europe; and the United States.

In the 1994 article it was noted that the paint easily wore off leading edges and cowlings, the interiors were Spartan, and the owner's manuals were rather thin. Today the manuals are still thin, but all else has changed. The new paint is winning praise from dealers and customers, and the interiors are downright citified. The Maule is not just a workhorse anymore.

Instrument panels come in tan and gray, not just black, and the hardware-store switches and knobs are all but gone — replaced with more traditional aviation-quality fixtures.

There's a $100,000 paint booth from Italy now sitting in one corner of the plant where spraying can be done in a clean and temperature-controlled environment. Fixtures have been built to hold wings and tails so that they can be painted prior to mounting on the aircraft. The old technique was to assemble the entire airplane and paint it afterward. The new urethane paint looks glassier and doesn't get brittle on the fabric-covered aft fuselage and tail.

There are other production changes as well, part of a $200,000 factory modernization over the past two years. All steel parts are sent out to be powder-coated for improved corrosion resistance. These include the fuselage, landing gear, and aileron attachments.
Speaking of landing gear, most customers are now requesting the new spring-aluminum gear, as opposed to the older style with supporting struts and braces. It is easier to maintain, has a wider stance that makes the aircraft easier to land, and adds a few knots to the cruise speed. But don't get the idea that "spring" means springy. While the landing gear can absorb shock, it does not bounce the aircraft.

There are less visible changes in the basic Maule design as well. The fire wall and the metal cowling near the exhaust pipe exit are stainless steel and therefore last longer, and the wing skin is thicker to reduce wrinkling that sometimes occurred in older-model Maules during rigging. Prices, despite the improvements, have risen little.

The ultimate citification of the Maule, however, is the new handsewn leather interior option. Prices start at $1,300 and go up to $3,400 for a full leather interior. The luxury look is a source of pride for everyone in the factory, but especially for Willene Hunt, Nadine Willis, and Hilda Burnham, a mother-sister-daughter combination that sews all the aircraft interiors. There are several mother-daughter and father-son combinations among the workers, not to mention 10 members of the Maule family working there; June Maule heads up the operation started by her late husband, B.D.

The newest models are the M-7-235C Orion, the MX-7-180C Millennium, and the MX-7-180B amphibian floatplane. Just for good measure, the MXT-7-180A Comet nosewheel model was flown as well. Suffice it to say that they all are gentle in the stall, all approach at about 70 mph (60 kt), all require the pilot to lead a turn with the rudder and follow with ailerons, and all have the minus-seven-degree flap position that is claimed to reduce drag in cruise, adding airspeed in the process.

The M-7-235C Orion was chosen for special attention during my test flights, because — while more expensive (see the specifications box) — it is among Maule Air's top-performing piston-powered aircraft. Yes, there is a Maule powered by an Allison turboprop engine, but it was not flown for this review.

The Orion is selling well, with 14 produced in 1997 and a total of 20 on order. The five-place Orion is for pilots who need more speed or who need to carry large, bulky objects from short runways and high-altitude airports. While the max gross weight is no higher than that of the average Maule, the five-place fuselage provides more cabin volume.

The 73-gallon (usable) long-range tanks come as standard equipment. However, an option allows up to 83 gallons of total usable fuel. The Orion features spring-aluminum landing gear, but the aircraft can also be mounted on floats. Florida tour operators use the Orion for scenic rides.

During demonstration flights, factory pilot Ray Maule took off in what appeared to be about 250 feet, landing in about the same distance, and even had the author coming close to that performance (about 300 to 350 feet) before the flight ended. The aircraft used was expected to be delivered to Poland by the time you read this, and averaged slightly more than 144 knots true airspeed at slightly greater than 75-percent power settings during the evaluation flight. Factory officials say, however, that most owners may use lower power settings as a routine and will average 139 kt.

The new MX-7-180C Millennium tailwheel 180-hp model — base price $121,435 — comes with long-range tanks (73 gallons of usable fuel) as standard. Obviously, owners won't fill the tanks every time; but when they're full, the aircraft has an eight-hour endurance and, with reserves, a range of 940 nautical miles. Fully equipped for IFR flight, an average model tops out at $142,900. The useful load averages about 1,000 pounds. The four-place aircraft features the new spring-aluminum gear and a constant-speed propeller, and it can be put on floats. Tested on warm day at 3,000 feet, the aircraft averaged 118 KTAS.

The 180-hp MXT-7-180A Comet has a nosewheel for those not willing to spend the 10 hours or so it takes to learn tailwheel flying. While the Comet comes with standard fuel tanks (43 gallons usable), long-range tanks can be added as an option. This model emerged two years ago and has found a role as a trainer. As this was written, Henderson State University in Arkansas was completing a deal to purchase six of the four-seat Comets for its flight school. The base price is $113,999 ($128,599 IFR equipped). The Comet, with a useful load of 950 lb, features the spring-aluminum gear and a fixed-pitch propeller. On the day it was flown, it was lightly loaded and climbed at nearly 900 feet per minute; cruise speeds averaged 113 KTAS. Entering the aircraft, it was noticed that the foot step was awkward to use in its location ahead of the landing gear. Once inside, however, instructors will find it a comfortable aircraft for long hours of training.

The final aircraft of the day to be evaluated was the 180-hp MX-7-180B four-place amphibian. Brent Maule, Ray's son, said that it is also known as the Star Rocket, not to be confused with the nosewheel model of the same name. The amphibian is the newest model and was awaiting certification at the time of the demonstration flight. It has already found an owner, by the way, and will be delivered when certification is complete. It is Maule's only 180-hp model to be mounted on amphibious floats (meaning that the floats are equipped with retractable wheels to operate on land), and is equipped with Wipaire's new model 2350 Wipline floats. It is Wipaire's first venture into building floats for smaller single-engine aircraft. The 73-gallon tanks are standard. The aircraft has a useful load of 695 lb. With a base price of $165,000, it is marketed as an economical floatplane for personal fun or training. It was tested for this article on both warm days and cooler ones. The takeoff in warmer weather seemed to consume at least half and possibly more of the 2,800-foot specially built water runway at the Maule plant, but the takeoff run on the cooler day was about 1,200 ft. The cruise speed averaged 98 KTAS.

Just as the amphibian taxied up to the Maule plant at the conclusion of the demonstration flight, Brent came running to the aircraft. "Dad," he said to Ray, "I think we're building a new model." A customer had phoned, asking whether Maule Air could build a nosewheel aircraft that could be easily converted to floats when necessary. Engineering studies now indicate that it can be done, and yet another model will soon emerge from the Potato Head Factory.

In April Maule Air will announce two new models, a 260-hp tailwheel model and a new variation of the turboprop-powered model. So that's two more models to come, right? No, each aircraft will have three sets of equipment options, including engine and landing gear choices. Make that six new models.

The aircraft is a four/five-place, high-wing, single-engine airplane, equipped with conventional landing gear.
This airplane is certificated in the normal category. See the airplane’s P.O.H. for approved maneuvers. The airplane is approved for day and night VFR/IFR operations when properly equipped and certificated.

Two 21.5 gallon main fuel tanks, mounted in the inboard end of the wings, have front and rear outlets. The fuel lines running from these tanks terminate at the fuel selector valve on the left side kick panel. The fuel selector valve has four positions: LEFT, RIGHT, BOTH, and OFF. The fuel then runs through the firewall to the fuel gascolator. Fuel runs from the gascolator to the electric fuel boost pump, to the engine driven fuel pump, and then to the carburetor. If installed, two auxiliary wing tip fuel tanks, 15 gallon capacity, are mounted from the outboard wing bay. They are fuel transfer tanks and simply supply fuel to the main tank through a small vibrator pump.

The electrical system is a 14 volt, 50 amp, direct current, single wire circuit using the airplane structure as a ground return to the battery. The lead plate type storage battery is rated at 12 or 24 volts.