Get the app Get the app
Get the latest news on coronavirus impacts on general aviation, including what AOPA is doing to protect GA, event cancellations, advice for pilots to protect themselves, and more. Read More
Already a member? Please login below for an enhanced experience. Not a member? Join today
Pilot Resources Aircraft & Ownership Aircraft Fact Sheets Mooney Bravo 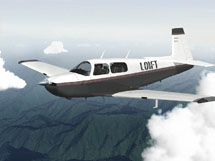 Toss those aerodynamics texts, pitch that trusty slide rule, and send home the brainiac with the expensive degree in the next office. Here is what all that pesky airplane-design stuff boils down to — there are only two ways to make an airplane faster. Give it better aerodynamics (less overall drag, more efficient use of the engine's cooling air) or give it more power. When, in the mid-1980s, Mooney undertook to create a new top-line model, the only practical avenue was to add more power. After all, the basic Mooney wing and airframe had worked exceedingly well with up to 210 horsepower, and the costs associated with creating a new or substantially revised airframe far outstripped those of bolting on a larger engine — still do.

So when Mooney set about designing the turbocharged TLS on a stretched M20 airframe penned for the now-defunct Porsche-powered PFM, the company's engineers knew that it would need as much of the new Lycoming TIO-540's power as possible to ensure that the model would show its backward tail to the competition. Mooney and Lycoming agreed to allow this parallel-valve, six-cylinder engine to be rated at almost 90 percent of its maximum rated output in cruise, with the mixture leaned very aggressively to preserve fuel economy.

Such an immodest maximum cruise power setting, together with the high TITs involved, raised more than a few eyebrows — particularly when the airplane was asked to deliver maximum cruise at FL250, where the TLS would crank along at almost 220 knots true. But the new TLS owners were too wowed by the speed and the published 2,000-hour TBO to care much about the high fuel flows (20.5 gph at max cruise) and the risk of running an engine so hard at altitude — the worst combination of conditions for a piston powerplant. High-altitude air is so thin — even though it's usually quite cold — that it's a poor conductor of heat; and, predictably, air-cooled engines suffer.

The results, in hindsight, were predictable. A great many TLS owners realized that their new airplanes needed extensive top-end work at 400 to 500 hours — a few more, according to maintenance sources, with as few as 200 hours since new. After the warm glow of having a new airplane wore off, many owners discovered that, at about a quarter of the way to TBO, the top end was just plain worn out.

Mooney and Lycoming have come up with a solution to the TLS's top-end woes in the new Bravo. A feature pulled from the engine-maker's history books — oil-cooled exhaust-valve guides — is aimed at giving this highly stressed engine a chance to live. Lycoming fitted the TIO-540-A1FB with this supplemental cooling system because it had worked so well on the 380-hp TIO-541 Beech Duke engines.

In concept, this so-called wet-head conversion is straightforward. Engine oil is fed under pressure to a gallery in each cylinder head adjacent to the exhaust-valve guide. The guide itself has a small groove cut into the outer diameter. This additional oil flow surrounds the guide, wicks away the heat, and then flows through the rocker boxes (where it can take some more top-end BTUs with it) and then through the normal drainback tubes to the sump. This oil is not intended to lubricate the inside of the valve guide. Bundle-of-snakes oil lines are the only external clues to the change from A1FA to A1FB, as the Bravo engine is dubbed.

Mooney intends the Bravo to be a traveling airplane, and the company graciously lent me the use of N2063W for a coast-to-coast-to-coast trip. For the first leg out of Long Beach, California, the Bravo managed an initial climb rate of 950 fpm by using the recommended cruise-climb parameters of 120 knots indicated, 34 inches manifold pressure, and 2,400 rpm. Fuel burn, according to the Shadin, was about 26 gph at full rich, and 23 gph leaned to 1,600 degrees TIT. The Bravo will maintain a strong rate of climb through 18,000 feet, above which the climb rate dips below 500 fpm. Mooney lists the Bravo's maximum rate of climb from sea level — using full power and a high-deck-angle 105 knots indicated — as better than 1,100 fpm. Weight plays a big part in climb performance; leave 250 pounds of stuff at home and you'll pick up 100 fpm at most altitudes.

Leveled off in cruise, the Bravo cuts loose with some impressive numbers. Because the weather was beautiful, I started the trip at 17,500 feet, VFR; temperature aloft was some 15 degrees Celsius above standard. Leaving climb power set (34 inches/2,400 rpm, also the maximum-cruise setting) and allowing the airplane to accelerate leaves little to do but close the electric cowl flaps and commence the trim dance — Mooney fits the Bravo with rudder trim, so you get to fine-tune in two axes. Even when leaned to peak TIT — usually very close to the 1,750-degree redline — the Bravo will hit the magic 200 KTAS on 17.5 gph; with the red knob pushed in to best-power mixture (1,650 degrees TIT), the M20M goes about four knots faster on 20.6 gph. At FL250, the Bravo will cruise at 215 KTAS on 20.5 gph — no peak TIT allowed above 22,000 feet to keep engine temps in check.

Mooney did the right thing in 1989 by fitting the TLS (and hence today's Bravo) with a high-caliber automatic turbo system. The Garrett AiResearch TA-04 turbo is managed by sophisticated density/differential controllers and breathes through an air-to-air intercooler. The turbo's operation couldn't be more seamless. Even at high ambient temperatures there was always boost for the taking, and there's little need to tweak the throttle knob during a protracted climb. (A far cry from my Mooney 231 days of constant fiddling to maintain a desired amount of boost, thanks to its fixed wastegate and too-small turbo.) Uprated turbine casings and a more durable exhaust system allow for the 1,750-degree TIT limit.

In the high-power cruise regime, the Bravo's new oil cooling is readily apparent on the engine instruments. Higher oil temperature — by 10 to 15 degrees — is the norm, accompanied by slightly lower cylinder-head temps than before. In addition, changes in power or airspeed take longer to show up on the CHT gauge, the result of the oil's providing a bit of thermal stability to the heads. (That doesn't mean you can just chop power and point the nose at terra firma and not see the CHT needle budge, but the engine seems more temperature-stable.)

At 17,500 feet the Bravo's cylinder-head temperature remained below 400 degrees only at the best-power mixture. Leaned to peak, it would creep to 410 degrees unless the cowl flaps were cracked open — neither Lycoming nor Mooney specifically allow lean-of-peak operation. I tried a few more power settings; each successively lower power setting produced, predictably, less speed on less fuel and reduced engine temperatures. These settings including 32 inches/2,400 rpm (198 KTAS, 16.4 gph), 30 inches/2,400 rpm (189 KTAS, 14.9 gph), and 27 inches/2,200 rpm (172 KTAS, 13.3 gph). There are no percentages of power listed in the power-setting tables, but based on the fuel flows, the 30 inches/2,400 rpm looks to be the 75-percent-power combination. While Mooney has worked hard on getting the shakes out of this installation — and has for the most part succeeded — there was a noticeable shudder in the airframe at lower engine speeds, rendering the 2,200 rpm setting less comfortable than the higher prop speeds.

At the fuel stop in Amarillo, Texas, 3.9 hours after takeoff, the Bravo took 68 gallons, for a block-to-block average of 17.4 gph and 212 knots for the 825-nm trip. A short hop into Ada, Oklahoma, for an overnight and then a fuel stop at Kentucky's Sturgis Municipal the next day completed the trip into AOPA's Frederick, Maryland, headquarters. All told, the Bravo posted a total flying time of 10.7 hours, for an average of 194 knots over the ground.

Launching into pale, predawn light, I pointed the Bravo in the general direction of California and, 4.7 hours later, touched down in Butler, Missouri, for fuel. With the Lycoming cranking along at the more moderate 30 inches/2,400 rpm setting — in an effort to extend the Bravo's range a bit — the Shadin typically showed a consumption rate of 15 gph at 16,500 feet. Later in the trip, to maintain visual surveillance on thunderstorms and to avoid the usual turbulence of the desert southwest, I climbed the airplane to FL200 and then to FL220. Even at this comparatively modest power setting, the Bravo trued 192 knots. By midafternoon — with a second stop in Albuquerque for fuel — I was back in Long Beach, a bit tired of sitting in one place and raspy-voiced from being on oxygen during most of the trip, but certainly not ready to crawl into bed for a week. In fact, the Bravo was easily the most comfortable nonpressurized long-distance traveler I've enjoyed. Better, in many ways, than the fondly remembered Mooney 231 that was my ride for three years.

Inevitably, the Mooney faithful compare the Bravo to the more traditional M20s, particularly the vaunted 252 — now returned as the Encore. Yes, the Bravo's Lycoming is thirstier and rougher than the smaller Continental in the 231/252 and Encore; and, yes, the Bravo's full-fuel payload is no better than those of the smaller airplanes. But the performance is there for the taking. At comparable percentages of power, the Bravo and the Encore remain separated by about 15 knots. The Bravo's extra power makes for better high-altitude climb and slightly improves runway performance.

Current owners of wet-head TLSs and potential customers for the Bravo might be asking the same question: Does the oil-cooling scheme make the turbo Lycoming worthy of its 2,000-hour TBO? Too early to tell, but the initial indications are promising. The question remaining to be answered is this: Now that the exhaust valve guides are cooler, what is the next-weakest link in the chain? Bravo (and wet-head TLS) owners then face a dilemma square-on: Do you throttle back a bit — to, say, 75 percent of maximum for cruise — and sacrifice about 10 knots for the possibility of greater engine longevity? Or, do you run at maximum cruise — because, as one TLS owner told me, "I didn't buy the airplane to go slow" — and hope the additional oil cooling does the trick.

The airplane is powered by a horizontally opposed, six cylinder, direct drive, turbosupercharged, air cooled, fuel injected engine. The engine is a Lycoming TIO 540-AF1A, or -AF1B and is rated at 270 horsepower. The turbocharger system consists of a turbine and compressor assembly, intercooler, density/differential pressure controller, variable wastegate assembly, and other components. Engine instruments operate electrically, except for the manifold pressure.

Fuel is carried in two integrally sealed sections of the forward, inboard area of the wing. Total usable fuel capacity is 89 U.S. gallons. The recessed three position fuel selector, allows the pilot to set the selector valve to LEFT tank, RIGHT tank or OFF position. The electric boost pump is capable of supplying sufficient pressure and fuel flow to the engine for rated engine performance should the engine driven fuel pump fail. Two electric fuel-level transmitters, working is series, in each wing tank operate the appropriate, left or right, fuel quantity gauges. Fuel Flow (if installed) indicates the volume of fuel being used, total fuel used, fuel remaining or time remaining. Optional fuel flow systems are available and each do not indicate the same type data.

Electrical power is supplied by two, belt driven, self-rectifying, 28 volt, 70 ampere alternators and two 24-volt, 10-ampere-hour storage batteries. The No. 1 battery is normally used to sustain the electrical system and to start the aircraft. The No. 2 battery is not normally used but is kept in a fully charged condition by trickle charge, through a diode system