Get the app Get the app
Get the latest news on coronavirus impacts on general aviation, including what AOPA is doing to protect GA, event cancellations, advice for pilots to protect themselves, and more. Read More
Already a member? Please login below for an enhanced experience. Not a member? Join today
Pilot Resources Aircraft & Ownership Aircraft Fact Sheets Mooney Eagle 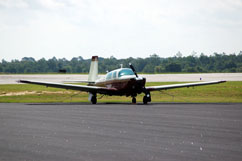 Efficiency. It's a Mooney hallmark. Traditionally, no other production airplane has sucked as many knots from each gallon of fuel as the M20 Mooneys. Low drag thanks to a small cabin cross section and an efficient wing propel the airplanes from Kerrville, Texas, at fast cruise speeds on miserly fuel burns. Modern cowl designs really help, too; the Ovation's is one of the best in the business.

Aerodynamics is one thing. Manufacturing is another. The traditional monocoque design found in Cessnas, Beeches, and Pipers, for example, lends itself to an efficient production-line manufacturing process. From a safety standpoint, pilots appreciate the Mooney's welded steel tube cage that surrounds the cabin and the remarkably strong wing with its tip-to-tip continuous carry-through spar. Manufacturing experts, though, wring their hands at the number of hours it takes to build a Mooney. Inefficient as the process may be, the end product seems to justify the means. Pilots keep buying Mooneys, and while other manufacturers have come and gone and sometimes come back, Mooney has hung in there, churning out airplanes year after year for decades. Sure, there have been tedious months and brief manufacturing hiatuses years ago. And as recently as a year ago, the company seemed on the brink of bankruptcy, buried under unprofitable subcontracting deals with other aerospace manufacturers.

In mid-1997, Paul Dopp and his investment firm of AVAQ Partners bought a controlling interest in Mooney; previously, a French consortium owned the majority of the company. Dopp is no stranger to Mooney Aircraft. He owned it and Aerostar Aircraft in the early 1970s. Dopp's new management team shed the unprofitable subcontracts and set about recapitalizing Mooney. In mid-1998, Dopp's son, Chris, was named president, and he has been running the operation ever since.

Recognizing that there is little new efficiency to be gained in manufacturing the Mooney's complex wing and fuselage, the management team looked at the product line to see if it could be trimmed down to reduce costs. At the time, Mooney was building four models: the Allegro (nee MSE, nee 201), the Encore (nee 252), the Ovation, and the Bravo (nee TLS). The Allegro and Encore used the shorter fuselage; the other two shared the longer fuselage that debuted with the Mooney PFM in 1987. The Dopps decided that building only one fuselage style would be more efficient. Knowing that pilots favor the longer version, they discontinued the shorter one, leaving the Ovation and the Bravo as the only products. Recognizing that the Ovation's nearly $400,000 price would be an obstacle to many buyers, Mooney decided to offer a lower-cost version that still utilized the longer fuselage.

The result is the Mooney Eagle, which debuted late last year at AOPA Expo '98 in Palm Springs, California. Mooney considers the M20S Eagle its entry-level airplane, replacing the Allegro. Because of the Eagle's $319,000 price tag, entry level is obviously a relative term. But when you look at what you get for the Eagle's price versus what the Allegro offered, it should be fairly easy for prospective buyers to justify the 10-percent premium that the Eagle commands over recent Allegros. In addition to the 20-inch-longer fuselage, the Eagle offers greater performance through the 244-horsepower Continental IO-550-G, which turns a two-blade McCauley propeller. The Allegro flew behind a 200-hp Lycoming IO-360 and a two-blade McCauley. Unlike the Allegro, the Eagle comes standard with dual batteries. It also carries a maximum gross weight of 3,200 pounds, 300 pounds more than the smaller airplane. Eagle fuel capacity is up nine gallons to 75 usable. Like the Allegro and the rest of the Mooney fleet, the Eagle comes with an AlliedSignal Bendix/King avionics stack.

New to the Eagle and the entire 1999 Mooney fleet are the Moritz Corporation engine and power management gauges. The gauges provide both analog and digital readouts. Power, for example, can be quickly set by using the analog displays. Fine-tuning is easier with the digital readouts.

The Eagle and the Ovation have a lot more in common than their gauge packages and the long fuselage. They also share the same engine model. In the Ovation, the IO-550-G turns at a comfortable 2,500 rpm, producing 280 hp. Other variants of the IO-550 produce 300 or 310 hp at 2,700 to 2,800 rpm. Mooney engineers set a benchmark of a 175-knot cruise speed for the Eagle. It turns out that max power of 244 hp is necessary to deliver 175 kts at 75-percent power. According to the engineers, the engine delivers 244 hp at 2,400 rpm. At that rpm, the engine is not working very hard, and, as a result, it should routinely reach its 2,000-hour TBO. Mooney specs say that the Eagle at max gross weight and standard conditions will indeed do 175 knots true airspeed, versus the Ovation's 188 knots. On our test flight, when we were some 300 pounds below maximum weight and at 75-percent power, the Eagle turned in 181 knots true at 7,500 feet on about 13.5 gallons per hour.

The Ovation's IO-550 swings a three-blade McCauley prop. The lighter two-blade on the Eagle meant that Mooney could remove about 16 pounds of ballast from the tail. As a result, pilots will notice a slightly different pitch sensitivity between the two airplanes. The Eagle is a bit more responsive in pitch; in that sense it flies more like an Allegro than an Ovation.

As in the Ovation, the IO-550 makes life easy on the pilot. For takeoff in the Eagle, push all three knobs forward and leave them there for the initial climb. Throughout the climb, the pilot's only engine management duty is to give the mixture control about one turn every thousand feet or so to keep the engine leaned. The highly derated engine flies very cool and requires no cowl flaps. At cruise altitudes above 5,000 feet or so, the only engine management necessary after leveling off is leaning to best power or best economy. At lower altitudes, a slight reduction in manifold pressure may be necessary, depending on the performance desired. The slow-turning prop produces minimal vibration and makes for a quiet cabin.

With the 3,200-pound max gross weight and a basic empty weight of 2,194 pounds, the Eagle has a useful load of 1,006 pounds. Fill the tanks with 75 gallons of fuel and you have a payload of 556 pounds, enough for three adults and bags. At about 14 gph, the endurance stretches to about 4.5 hours with a 45-minute reserve. To carry four adults, you need to take off with 54 gallons of fuel, which still allows more than three hours of flight with reserves.

The Ovation and the Bravo have max gross weights of 3,368 pounds, and they carry more fuel — 89 gallons each. Their basic empty weights are higher than the Eagle's, however, giving all three airplanes approximately the same full-fuel payloads.

Pilots will appreciate the Eagle's comfortable cloth seats, the new engine gauges, and the reliable systems for which Mooney is known. They'll take comfort in the many redundant features and the proven avionics. But in the end, pilots will appreciate the Eagle for what it is: a fast new entrant to the Mooney family; an honest 175 knots on 14 to 15 gph. Manufacturing efficiencies or not — the Eagle fits the Mooney mold.

See the original article:
From the Mooney Mold

The M20S is a 4 place, all-metal, low wing, high performance, single-engine airplane, with retractable landing gear.
This airplane is certificated in the normal category. See the airplane’s P.O.H. for approved maneuvers. The airplane is approved for day and night VFR/IFR operations when properly equipped and certificated.

The airplane is powered by a horizontally opposed, six cylinder, direct drive, normally aspirated, air cooled, fuel injected engine. The engine is a Continental IO 550-G and is rated at 244 horsepower.

Fuel is carried in two integrally sealed sections of the forward, inboard area of the wing. Total usable fuel capacity is 75 U.S. gallons. The recessed three position fuel selector, allows the pilot to set the selector valve to LEFT tank, RIGHT tank or OFF position. An electric Fuel Boost Pump is provided which has the capability of operating the engine at partial power in case of engine driven fuel pump failure. Two electric fuel-level transmitters, working is series, in each wing tank operate the appropriate, left or right, fuel quantity gauges. Fuel Flow indicating system (if installed) indicates the volume of fuel being used, total fuel used, fuel remaining or time remaining. Optional fuel flow systems are available and each do not indicate the same type data.

Electrical power is supplied by a gear driven, self-rectifying, 28 volt alternator, capable of 100 amperes and two 24-volt, 10-ampere-hour storage batteries. The No. 1 battery is normally used to sustain the electrical system and to start the aircraft. The No. 2 battery is normally considered as a backup and is kept in a fully charged condition by trickle charge, through a diode system.