Get the app Get the app
Get the latest news on coronavirus impacts on general aviation, including what AOPA is doing to protect GA, event cancellations, advice for pilots to protect themselves, and more. Read More
Already a member? Please login below for an enhanced experience. Not a member? Join today
Pilot Resources Aircraft & Ownership Aircraft Fact Sheets Piper Colt 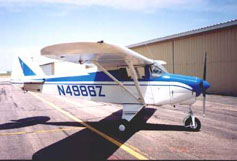 In the early 1960s the Piper Cherokee (built in Vero Beach, Florida) was falling behind in production and Piper Aircraft needed an interim two-place trainer.

A meeting was called at the company's Lock Haven, Pennsylvania, executive offices in the fall of 1960, or maybe it was early 1961, to see about a trainer as a temporary fill-in.

The meeting began in the morning and alternatives were discussed. Perhaps the company could buy rights to manufacture the Forney Aircoupe (a modification of the original Engineering Research Ercoupe). There were other build-under-license suggestions and the arguments — well, discussions — continued throughout the morning.

During all this talking, the senior Mr. Piper sat as if asleep.

There was more discussion as different build-under-license ideas were brought up. Everyone had his own ideas — except Mr. Piper.

Late in the afternoon Mr. Piper looked up from his state of rest and said, "We're going to make a two-place version of the Tri-Pacer. Tony (Thomas Piper), you have three weeks." That was the end of the discussion. The company needed a two-place training aircraft that could be assembled quickly and cheaply. This need created the Colt, which could be viewed as a flapless, two-seat version of the Tri-Pacer – the two did share type certificates and model designation – or a modernized, tricycle-gear Clipper. It was powered by the Clipper’s Lycoming O-235. It cost $4,995, just over half as much as the most recent PA-22.

In addition to deleting the Tri-Pacer’s flaps, the Colt was produced sans rear windows, the second wing tank, and the rear door. Though not as popular as its four-seat stablemate, the Colt nonetheless sold almost 2,000 units.

That the Colt was the last in the line of short-wing Pipers seems only fitting. After all, it fulfilled much the same stopgap role as did the first Vagabond, and its inception followed nearly the same path, at least in terms of engineering and manufacturing. At the end of 1963, the Colt’s assembly line was shut down, ending the era of short-wing Pipers. The only other tube-and-fabric Piper remaining was the Super Cub.

Fortunately, there is a group that realizes the role of the short-wing Pipers. This group is, naturally, the Short-Wing Piper Club. It produces a bimonthly newsletter that is a veritable gold mine of parts and advice. More and more of these aircraft are being restored, and they continue to increase in value. But the short-wing Pipers are more than just good investments. They stand now to remind pilots and history buffs alike that – Cub lore notwithstanding – these were the aircraft that helped bring Piper back from the brink.

The airplane is a two-place, high wing, single engine airplane equipped with tricycle landing gear, constructed of welded steel tubing covered with Grade “A” fabric and finished with fire resistant butyrate dope.
This airplane is certified in the normal and utility category. In the normal category all aerobatic maneuvers including spins are prohibited. See the aircraft’s P.O.H. for approved maneuvers when in the utility category. The airplane is approved for day and night VFR/IFR operations when equipped in accordance with F.A.R. 91 or F.A.R 135.

The aircraft is powered by a Lycoming O-235-C1B or C1 and is rated at 108 horsepower. It is a four cylinder, normally aspirated, direct drive, air cooled, horizontally opposed, carburetor equipped engine.

The fuel for the Colt is carried in an 18-gallon fuel tank located in the inboard end of the left wing. As optional equipment, an auxiliary tank, located in the right wing, provides an additional 18 gallons of fuel. The auxiliary tank must be used in level flight only. An electric fuel gauge for each tank is located on the instrument panel.

Electrical power for the Colt is supplied by a 12 volt, direct current system. For all normal operations, power is provided by a 12 volt, 25-ampere generator. A 12-volt, 24 ampere battery is used in the system to furnish power for starting as a reserve power source.