Get the app Get the app
Get the latest news on coronavirus impacts on general aviation, including what AOPA is doing to protect GA, event cancellations, advice for pilots to protect themselves, and more. Read More
Already a member? Please login below for an enhanced experience. Not a member? Join today
Pilot Resources Aircraft & Ownership Aircraft Fact Sheets Piper Pacer 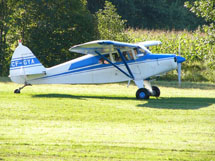 Short-wing Pipers are just that. The description is meant to set them apart from – how did you know? – long-wing Pipers. But don’t make the same mistake as Marilynn Milor of Wichita Falls, Texas. She and her husband bought a Cherokee 180, vintage 1970, with the short-span, constant-chord wing. When she heard about the Short Wing Piper Club, Incorporated’s (SWPC), national convention, she went, figuring to meet kindred Cherokee owners. Only after arriving did she discover that SWPC caters to fabric-covered, high-wing, Lock Haven, Pennsylvania-built short-wing Pipers. Owners of low-wing, aluminum, Vero Beach, Florida-built short-wing Pipers need not apply. Milor stayed anyhow, was accepted by true short-wingers as a newfound friend, and a good time was had by all.

Lest others make the same mistake as Milor, here are the facts: Short-wing Pipers, at least those recognized as such by SWPC, are the PA-15 and -17 Vagabonds, PA-16 Clipper, PA-20 Pacer, and PA-22 Tri-Pacer and Colt. The Vagabonds, Clipper, and Pacer are taildraggers; the Tri-Pacer and Colt have tricycle gear, although many have been converted to Pacer tailwheel status.

Humble in appearance, intent, and execution, these were the last steel-tube fuselage, fabric-covered Pipers and, with the exception of the PA-18 Super Cub, the last to evolve directly from the Cub. They were designed and built at a pivotal point in the history of Piper Aircraft Corporation. The company was making a difficult transition from a family-run business that was the world’s most prodigious manufacturer of small, simple, inexpensive airplanes to one that had to compete in a more sophisticated market with larger, more complex, and much more expensive models.

The Pacer was the first of Piper’s post-war models to have flaps and dual control yokes in place of sticks. It shared separate doors for front and rear seat occupants with the Clipper. Pacers were delivered with either a 125-hp or optional 135-hp Lycoming O-290. An adjustable-pitch Aeromatic propeller was also an option. All told, 1,120 Pacers were built before production finally ended in 1954.

The Pacer was joined in 1951 by the tricycle-gear Tri-Pacer. Moving the gear from tail to nose had a dramatic effect on sales. More than 7,600 Tri-Pacers were built over the model’s 10-year production run. The Tri-Pacer debuted with a 125-hp O-290 but almost immediately was upgraded to 135 hp. Later models were offered with 150-hp and 160-hp O-320 engines.

The last of Piper’s tube and fabric models was the Colt, which appeared in 1961. Intended as a low-cost trainer and personal airplane, the Colt was a barebones version of the Tri-Pacer with a 108-hp O-235 engine, two seats, and no flaps. About 1,800 were built during its three-year production run.

The Tri-Pacer has a considerable edge in numbers, but the Pacer has to be considered the classic short-wing Piper. That assessment will draw hostile fire from aficionados of other models, but consider that the Pacer has the best combination of cabin space, performance, and – the trump card – looks. It’s difficult even for loyal fans, of which I am one, to wax poetic about the Tri-Pacer/Colt’s stubby appearance. I began my flight training in a Tri-Pacer and logged some of my early hours as a private pilot in a Colt. They were fun airplanes with perky personalities and just enough quirks – a spirited power-off sink rate and hand-operated wheel brakes and flaps, for example – to make them interesting and challenging to a new pilot. I also remember being the brunt of occasional ribbing about flying a winged milk stool.

Proof of the Pacer’s aesthetic advantage is in the popularity of tailwheel conversions for the Tri-Pacer and Colt. Over-the-nose visibility doesn’t suffer much with the conversion. The gear isn’t very tall to begin with, and the cowling is stubby and slopes downward. Once the third wheel has been moved from front to back, a Tri-Pacer becomes a PA-22/20 Pacer.

Modifications are available to turn a short-wing Piper into just about anything a pilot could want. The list of mods includes, among other things, floats, skis, tundra tires, 180-hp engines, STOL kits, extended wing tips, speed fairings and seals, auxiliary fuel tanks, and metal skins to replace the fabric. But even unadorned, the airplanes are fun to fly, simple, and, with more than 10,000 produced, abundant. There is no shortage of short-wing Pipers.

The aircraft is powered by a Lycoming O-290-D2 and is rated at 135 horsepower. It is a four cylinder, normally aspirated, direct drive, air cooled, horizontally opposed, carburetor equipped engine.

The Piper Pacer is equipped with two 18 gallon fuel tanks, one in each wing. The tanks are drained individually and cannot be used simultaneously. Fuel in the right tank can be used only when the airplane is in level flight, and shall be considered as an auxiliary fuel supply.

Electrical power for the Pacer is supplied by a 12 volt 24 ampere hour reading battery.