Get the app Get the app
Get the latest news on coronavirus impacts on general aviation, including what AOPA is doing to protect GA, event cancellations, advice for pilots to protect themselves, and more. Read More
Already a member? Please login below for an enhanced experience. Not a member? Join today
Pilot Resources Aircraft & Ownership Aircraft Fact Sheets Taylorcraft 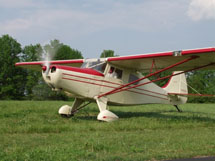 The story of the Taylorcraft is one of evolution, not revolution. The basic design has changed little over the years. The F21B is similar to the F19, for example, except for the change in powerplant to a 118-hp Lycoming O-235 engine, an increase in gross weight to 1,750 pounds, a baggage area capacity increase to 200 pounds, relocation of the battery to the firewall, and skylight options for the top of the cabin and lower door panels. Prices have held up well. The 1988 F21B flown for this article was originally sold at a discounted price of $36,463. It was the third-from-last F21B manufactured.

The Taylorcraft company and the aircraft design have survived in one form or another since the late 1920s. The present design had its genesis as a practical, no-nonsense workhorse with low operating costs in order to appeal to a Depression-era market. If William T. Piper and C. Gilbert Taylor had not had a disagreement, the Piper Cub we know today might have been the Taylor Cub.

Piper, an oil executive, entered the aviation industry when he saved the Taylor Aircraft Company from bankruptcy in 1930. He put more than $90,000 of his own money into the company, which showed no profit up to 1935. However, Taylor and Piper had a falling out over the redesign of what was then known as the Taylor Cub. Chet Peek, who wrote The Taylorcraft Story and has just completed The First Cub (referring to Taylorcraft, not Piper), explains what happened.

"Taylor had not been able to be at the plant working for much of the fall of 1935," Peek said. "He mentions being away and an operation in one of his letters. Walter Jamouneau and Ray Carlson were doing a makeover of the Cub into what would become the J2 [despite popular myth, the J was just a natural progression down the alphabet and did not stand for Jamouneau]. Taylor was having some input on this, via telephone. The final dispute came about when Taylor berated the engineers for not being able to get a satisfactory stress analysis ready, as required by the Civil Aeronautics Administration. Taylor then suggested the stress analysis be done by an MIT professor, '...which will only take a couple of days.'

"This prompted an acrimonious exchange of memos between Taylor and Piper on November 29, 1935," Peek said. "The upshot was that one would buy the other out. This agreement, ultimately signed on December 18, 1935, would have allowed Taylor to take over sole ownership of the company if he would pay off an $80,000 debt owed by the company to Piper. Of course, Taylor could not pay this amount, so he sold his share (of a company with a minus net worth) to Piper for $5,000."

Taylor later started his own company and continued building the Taylorcraft we know today. Over the years the design has evolved slowly, increasing the fuel load and the maximum gross weight, adding a more powerful engine and tricycle gear, and even enlarging the door.

Tailwheel aircraft are not for everyone, since they require more attention to rudder use than a nosewheel aircraft. In fact, rudder use in simple turns may have some characteristics that are unique to the F21B flown. Brown, who has given instruction in the aircraft used for this article, said that rudder pressure must be increased as the aircraft rolls into the turn, then decreased as the roll is stopped. "You have to practice to get the feel of how much rudder to apply," Brown said.

Two nosewheel F22 models were flown for comparison during a visit with the new Taylorcraft owners in Greensboro; entering and exiting the aircraft was found to be no more difficult than in a Cessna 152. A groundspeed check using a handheld GPS indicated the F22A to be a 95-knot airplane, while the F22C was a 115-knot aircraft. As in the F21B, visibility seemed a bit restricted for taller pilots. Views out the side window require a limber neck.

Still, the Taylorcraft may be just the answer for pilots in need of cheap wings. Grab one if the opportunity arises, because, as Will Rogers once said about land, they aren't making any more of them — at least for now.