Get the app Get the app
Get the latest news on coronavirus impacts on general aviation, including what AOPA is doing to protect GA, event cancellations, advice for pilots to protect themselves, and more. Read More
Already a member? Please login below for an enhanced experience. Not a member? Join today
Community Flying Clubs Club Connector Newsletter Aircraft Spotlight 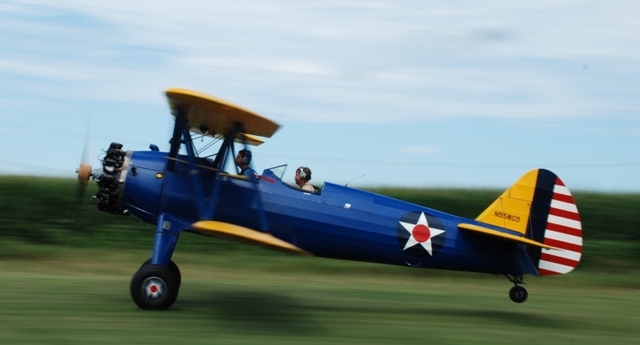 The Boeing Stearman is far from your typical flying club aircraft. Blue Sky Aero Flying Club in Morris, IL, operates one on leaseback and offers the aircraft for dual instruction or for rides, but it isn’t available for solo rental. Adding a Stearman to your fleet will certainly attract attention, and possibly some members who want to get advanced tailwheel training or just want to log an iconic aircraft type. Blue Sky Aero Flying Club owner and chief flight instructor Cindy Limbach shares how her club operates this historic biplane. 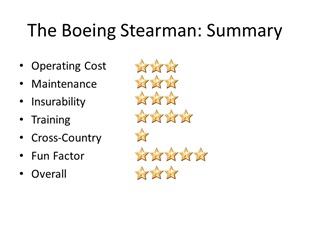 The Stearman is an open cockpit biplane with a big radial engine up front. But its operating cost isn’t much different than a comparable high performance single. The Continental 220-hp engine burns about 14 gph and consumes about a quart of oil every 6 hours, club owner Cindy Limbach said. “It has a normal fuel and oil burn,” she said. “The 220 hp burns as much fuel as any other 220.”

Maintenance (3 stars)
“The Stearman is relatively easy to annual,” Cindy said. “There are not a lot panels and there aren’t a lot of systems. It’s pretty easy.”

Blue Sky also has a maintenance shop, which charges about $1,000 for an annual for a Stearman, expecting it to take about 15 hours of labor. The cost is a little more than an annual for a Cessna Skyhawk.

Parts are plentiful, but tires can be expensive. On most GA aircraft, tires cost about $125, while on a Stearman they can be $300 to $400. There also is an AD on the metal prop, requiring an inspection every 100 hours. The wood prop doesn’t have the same requirement.

It is an open cockpit, tube and fabric aircraft, so it needs to be hangared, and at some point the fabric will need to be replaced. 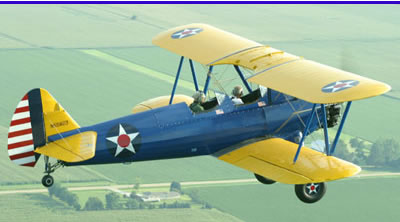 Blue Sky has had the Stearman on the line for years but only uses it for dual instruction or to give ride flights from its base airport. The pilots are named on the policy, which costs about $5,000 to $6,000 a year for the standard $1 million liability, $100,000 per person. The club hasn’t had a problem getting insurance, but Cindy recommends looking for someone who has a Stearman and find out who they use for insurance before you start looking.

The Stearman trained American pilots during WWII, and Blue Sky primary uses the aircraft for dual training. It also does local ride flights in the aircraft.

“Most of the people that come for dual aren’t members,” Cindy said. “It is available to members, but they usually fly it a couple times and that’s it.” She also noted that about 60 percent of the people that come in just want to get time in a Stearman or they are interested in buying a Stearman and need some training. About 40 percent just want a ride for themselves or to give as a gift.

The airplane is operated in the summer, generally starting in April or May and flies about 100 hours each summer.

It can be an intimidating airplane to fly. It’s big, it’s heavy, and the visibility on the ground makes it challenging to taxi. “You can’t see so you have to fishtail and S-turn down the taxiway,” Cindy said. A Stearman also surprises people because of the amount of control input necessary to move so much mass. “Something some people need to work their way into is being aggressive,” Cindy said. “Takeoff roll and landing, you have to use more rudder control, be a lot more expressive about their rudder movements because you’re moving a lot more airplane.”

The Stearman isn’t the best cross-country aircraft. It has a cruise speed of 105 mph, and about 40 gallons of usable fuel, meaning you’ll have to make frequent fuel stops. “It takes too long” to get anywhere Cindy said.

It’s an open cockpit, so the ride is going to be windy and the small luggage compartment has a canvas floor and can only hold 60 pounds. “We don’t load it up,” Cindy said. “The most we ever put in it was a bunch of sweet corn. We loaded it up and took it home.”

Blue Sky will sometimes take the plane on shorter trips to Oshkosh or to Galesburg, IL for the National Stearman Fly-In.  Other than that, the airplane is only used for dual instruction or local ride flights.

It’s hard not to have fun in a Stearman. Climbing into the open cockpit and putting on the helmet and goggles puts a smile on your face and that’s before the big radial engine coughs to life. Once airborne, you’ve got the wind in your face and an incredible view, not to mention an extremely maneuverable aircraft that can be put through the paces.

“Usually people get out and give you a hug or shake your hand hard and tell you that it’s the best thing they’ve ever done,” Cindy said.

The Stearman might not be the most practical aircraft in your fleet, but it will attract attention and draw people to your club—particularly if you offer dual instruction or rides to non-members as well as members. And it simply is fun. The noise of the radial, the wind in your hair, and the history all make the experience something you’ll never forget.