Get the app Get the app
Get the latest news on coronavirus impacts on general aviation, including what AOPA is doing to protect GA, event cancellations, advice for pilots to protect themselves, and more. Read More
Already a member? Please login below for an enhanced experience. Not a member? Join today
Community Flying Clubs Club Connector Newsletter Question of the Month: As a flying club member, can I use club aircraft to receive flight instruction and pay an instructor? 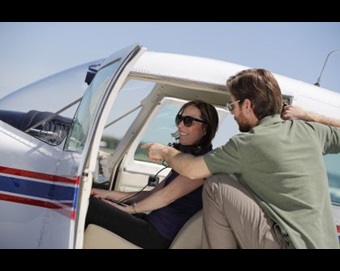 As a flying club member, can I receive flight instruction in a club aircraft that I provide - and can I pay a CFI, who is also a member of the club, to instruct me in that club aircraft?
These are questions that get to the heart of the mission of many flying clubs—that is, to keep people flying, and to provide continuous improvement, training, and education.  Like many things in aviation, the answer to both questions is “yes, but…”

There are no regulations that define what a flying club is—or how it should operate – but there are official policies and “orders” that define flying clubs and cover specific topics, such as organizational structure, ownership, usage, and budgeting, and we’ll address these in future articles.  This month we will look at the implication on flight training—and to do so, we must briefly dive into airport operations.

When airport sponsors accept federal funding for things such as improvement projects, they become contractually bound to meet and enforce a series of obligations—called assurances—that protect the public’s investment and interest in that airport.  These obligations are detailed in FAA Order 5190.6B "The Airport Compliance Manual" that covers topics such as operations, access, fuel, and others.  Chapter 10 of the manual details Reasonable Commercial Minimum Standards and specifically, Chapter 10.6 establishes compliance expectations for flying clubs.

At first glance it might seem odd that guidance for flying clubs is in the compliance standards chapter of the airport compliance manual.  Actually, true flying clubs, as defined by FAA, are afforded a huge benefit by not having to comply with the minimum standards required of commercial aeronautical activities, but in return, they are expected to comply with Chapter 10.6.  Many airport sponsors establish additional standards (and reporting – see Question of the Month, December 2017) for flying clubs, to ensure that clubs are not providing commercial services, and to ensure that it is not actually a flight school, FBO or other commercial entity masquerading as a flying club, in name only, for economic advantage.  By the way, none of this applies to private airports or public airports that are not “federally obligated,” except to the extent those airports elect to follow similar practices.

With this as background, we can get closer to answering the question about receiving flight instruction in your club aircraft – and it is all to do with fair play.   Back in 2016, based on certain proposals from the AOPA, the FAA issued a policy statement that clarified the operation of flying clubs at federally obligated airports.  In particular, the clarification amends FAA Order 5190.6B in terms of compensation for CFIs (and A&Ps) who are members of a club, and, in return, amends the expected behavior of flying clubs on the topic of providing flight training.

Amended Chapter 10.6(c)(3):  A flying club may permit its aircraft to be used for flight instruction in a club-owned aircraft as long as both the instructor providing instruction and person receiving instruction are members of the club owning the aircraft, or when the instruction is given by a lessee based on the airport who provides flight training and the person receiving the training is a member of the flying club. In either circumstance, a flight instructor may receive monetary compensation for instruction or may be compensated by credit against payment of dues or flight time; however that individual may not receive both compensation and waived or discounted dues or flight time concurrently. The airport sponsor may set limits on the amount of instruction that may be performed for compensation.

So, yes—if you are a member of a flying club, you may use the club aircraft to receive personal flight instruction and you may pay the instructor.  The CFI you choose may (or may not) be a club member and may be compensated.  Note, however, the last sentence. The airport sponsor may impose limits on the amount of instruction a CFI member may deliver to another member for compensation, presumably such that the instruction does not disadvantage a commercial provider of flight training on the same airport.

It is also important in this context to understand that in the FAA amendment that clarifies flight training in club aircraft, they also specified that:  Flying Clubs may not hold themselves out to the public as fixed based operators, a specialized aviation service operation, maintenance facility or a flight school and are prohibited from advertisements as such or be required to comply with the appropriate airport minimum standards.

These specifications are made in the spirit of operational fairness at an airport.  After all, a flying club is not required to comply with the same minimum standards as a commercial flight school or FBO, and it would be unfair for a club to use this as a competitive advantage.  A flying club is not a commercial flight school and shouldn’t act as one. If a club wishes to advertise flight instruction or other types of commercial operations to the public (such as sightseeing rides, aircraft rental, etc.), then the airport operator can hold that club to the standards they impose on commercial operators, such as flight schools and FBOs.

As an aside, the amendment to FAA Order 5190.6B also contains similar clarifications for the compensation of qualified mechanics who are club members, and who work on club aircraft.

Added in February 2020:  We also advise that the member pays the instructor directly, rather than the club charging the member and then paying the instructor.  This has two advantages: firstly, it simplifies the club's accounting, and secondly, prevents any hint of the club providing an instructor.  The latter point is important when considering the non-commercial nature of flying clubs, and also when pondering the regulatory requirement—or otherwise—for 100-hour inspections of flying club aircraft.

For more information and clarification, please email the Flying Club team and include a good telephone number to call—it is easier to explain this verbally!