Get the app Get the app
Get the latest news on coronavirus impacts on general aviation, including what AOPA is doing to protect GA, event cancellations, advice for pilots to protect themselves, and more. Read More
Already a member? Please login below for an enhanced experience. Not a member? Join today
Community Flying Clubs Club Connector Newsletter Aircraft Spotlight: Pulling the Gear Up on a Cessna 172RG Cutlass 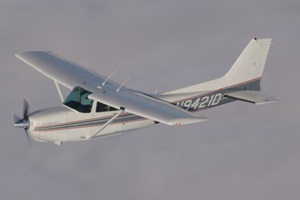 Last month, we broke from the mold of not evaluating either the ubiquitous Piper Cherokee or Cessna 172 or 182 when we looked at a C-172 outfitted for backcountry flying in Alaska. This month we’ll follow suit by comparing the C-172RG Cutlass with a fixed-gear C-172SP.

Sky-Vu Flyers, based at three different airports in the Indianapolis, IN area (See this month’s Club Spotlight), has both a fixed-gear 2002 Cessna 172SP Skyhawk and a 1984 Cessna 172RG Cutlass. Club Treasurer Ron Diamond shares the club’s experience with the retractable gear version and compares it to the traditional C-172.

The Cessna 172 Skyhawk debuted in 1956 and is the most produced aircraft in history with more than 44,000 made. It originally featured a 145-hp Continental O-300 engine and a fixed-pitch prop, which was eventually upgraded to a 150-hp Lycoming O-320 and then a 160-hp version.  Conversions to 180-hp are also available by Supplementary Type Certificate, (STC).

“The 172RG (Cutlass) has about the same operating costs as our 172SP (Skyhawk), since they’re both running the same engine, burn about the same fuel and oil per hour,” Ron said. “That said, there is a difference in maintenance for the Cutlass.” Sky-Vu charges $106 an hour, Hobbs time wet for the SP and $133 an hour for the RG.

Maintenance generally isn’t a problem because it’s a 172. Mechanics are familiar with the type and parts are plentiful. However, Sky-Vu’s Cutlass was built in 1984 and is the oldest airplane in the fleet.

“So, we have a few more maintenance items in this plane, compared to our Skyhawk, that are simply based on more years of wear and tear on some components,” Ron said. “In addition, this airplane has retractable gear and that means expensive repairs being a real possibility.” For example, last year a cracked gear actuator was found and the club replaced both.

Although the club hasn’t done an analysis on the differences, labor for the base annual inspection is likely to be two to three hours more for the Cutlass compared with the Skyhawk, because of the need to jack the Cutlass and swing the gear for inspection. Depending on your mechanics rates, that could add $150 to $300 to the base cost for the Cutlass annual compared with the Skyhawk. “The real cost differential is related to the landing gear and the possibility of making expensive repairs if any defects are found,” Ron said.

Getting insurance hasn’t been a problem for the club, but the premium for the retractable gear Cutlass is more expensive than the fixed-gear Skyhawk. For the last 12-month period, the Cutlass cost $27.90 per $1,000 of insured value compared to $21.18 for the Skyhawk, so about 24 percent more. Given the difference, a $75,000 Cutlass will cost $504 more per year to insure than a similarly priced Skyhawk.

“In addition, insurance underwriters often place more stringent pilot restrictions on members flying the Cutlass. In our case, we require a private pilot certificate and a minimum of 100 total logged hours in order to be checked out in our Cutlass,” Ron said. “Once checked out, we require members fly a minimum of 3 hours in this aircraft (or same make and model) every 180 days in order to stay current. Our club’s Vice President, Tom Eaton, recently conducted a survey of other flying clubs who were operating a Cutlass and found our restrictions to be fairly common. Some clubs were more restrictive and some were less so.” 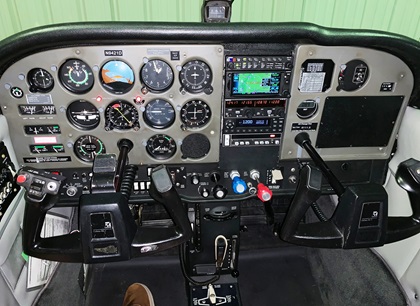 The 172 is a simple plane to fly and has been used for decades as a primary trainer. Sky-Vu has very few student-pilot members (3 out of 70) and doesn’t do much primary training. If there is a student pilot finishing their certificate, they would fly the Skyhawk. The club doesn’t use the Cutlass for basic flight training, as members must hold a private ticket in order to be checked out in it.

For cross-country flying, the biggest difference between the Cutlass and Skyhawk is airspeed. The Cutlass with the gear retracted cruises at 129 knots TAS at 8,000 feet, compared with 116 knots TAS in the fixed-gear Skyhawk.

“Most members flight plan this plane at 130 knots and it’s hourly rate makes it the second-lowest cost per mile airplane in the fleet,” Ron said. “All things considered, this airplane is a great cross-country vehicle for the cost.” 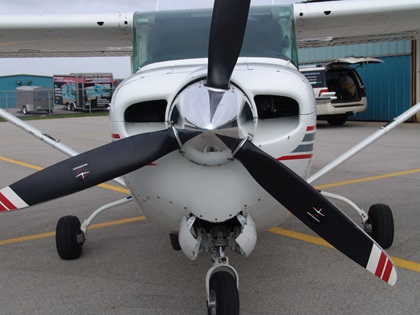 “I’m sure every member has a favorite airplane for whatever reason. I think the fun factor here is based on the fact that once you leave the ground, you can ‘tuck your legs in’ and cruise at a noticeably faster pace than in a typical Skyhawk,” Ron said. “The adjustable pitch prop also adds more responsibility of things to manage during the flight, which adds to the challenge/fun of flying this particular airplane. For me (and perhaps a few others) the more knobs, gauges, handles and buttons one has to manipulate and monitor to fly the airplane, the more challenging and fun it is!”

The Cessna 172RG Cutlass has the same basic operating costs as a traditional Skyhawk, but with a faster cruise speed, more fuel capacity and useful load, making it a better cross-country machine. It’s also a good platform for members working on a commercial certificate or complex endorsement, as well as an IFR rating. There are tradeoffs – the retractable gear will add to the costs of annual inspections and maintenance, and the insurance will inevitably be more. For clubs looking for a plane that most pilots are comfortable flying, with better cross-country credentials and don’t mind a little added insurance and maintenance costs, the Cessna 172RG Cutlass is a very nice addition to a fleet.