Get the app Get the app
Get the latest news on coronavirus impacts on general aviation, including what AOPA is doing to protect GA, event cancellations, advice for pilots to protect themselves, and more. Read More
Already a member? Please login below for an enhanced experience. Not a member? Join today
Community Flying Clubs Club Connector Newsletter Club Spotlight: Sky-Vu Flyers—Operating 5 Planes at 3 Airports

Flying clubs come in all sizes—from operating a single aircraft with just a few members to multiple aircraft and dozens of members. Sky-Vu Flyers began with four members who pooled together $500 in 1956 to form a club with a Cessna 170.  Over the years it has grown to a club that today has 70 members with five aircraft based at three different airports in the Indianapolis metropolitan area. “I have no idea how to start a flying club, but I know how to run a big one,” Club Treasurer Ron Diamond said.

The club’s success starts with a clearly defined mission, vision, and core values. They are prominently displayed on the club’s web site, which is easy to navigate and provides lots of detailed information. The mission statement reads: Sky-Vu Flyers is a premier flying club offering affordability in personal aviation through shared ownership of a fleet of safe, well-maintained, well-equipped aircraft." Ron, who has been treasurer for 25 years, emphasized the idea that the club has a low cost for flying and provides high value, which mirrors the club vision: "Sky-Vu Flyers strives to provide unmatched value in personal aviation.” There are five core values:

The Cirrus is the newest addition and was added after the club used Survey Monkey to poll the membership on a series of questions including what type of aircraft the club should add and if the club expanded locations, where should they go.

“What we kept hearing was—I want an airplane that has more seats and is faster or has greater hauling capacity and is faster,” Ron said. “It was always something and faster.” The maintenance officer at the time did some research and presented the board with information about buying a Cirrus or a Columbia/Cessna Corvalis—which were in the $150,000 to $160,000 price range.

Although the club had four Cessnas, they never considered themselves a Cessna club. “We’ll get whatever makes the most sense for whatever the mission is,” Ron said. “Long story short, we ended up looking for an SR22 primarily because of the speed and it’s got pretty good hauling capacity as well.” Although the Columbia/Corvalis is fast and is a beautiful airplane, it doesn’t have as much carrying capacity, Ron said.

Once Sky-Vu acquired the SR22, the next question was about expansion, and if so, where. With aircraft at Eagle Creek Airpark (KEYE) on the west side of town and Indianapolis Metropolitan Airport (KUMP) on the north side about 25 miles away, the decision was to expand to Indianapolis Regional Airport (KMQJ) on the east side, based on the results of the member survey. The club considered Indianapolis Executive (KTYQ), which is north of Indy Metro, but it is a longer drive with traffic. Indy Regional is right off I-70 and easy to get to from Eagle Creek. 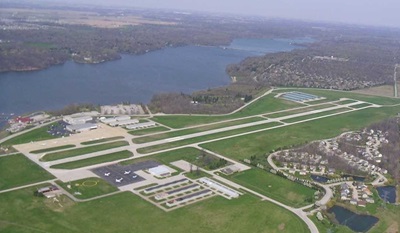 The next question was which aircraft would be based at the various airports. “Part of the discussion was that we need to have a combination of factors at each site,” Ron said. “We need to have one lower-cost airplane and one higher-cost but more capable airplane at each site.”

The 172SP, which has a 180-hp engine, is the lowest-cost airplane at $106 an hour, Hobbs time, wet and is at Eagle Creek along with the 182T, which has the G1000 glass panel. The club charges $150 an hour for it and until they got the Cirrus it was the most expensive airplane in the fleet. Ron said, “You could make the argument that we’ve got a trainer and a fantastic cross country airplane at Eagle Creek.”

Before getting the Cirrus, the 172RG and the 182S were at Metro. “We had that balance of a lower-cost airplane with a higher-cost airplane,” Ron said. “More of a trainer with the 172RG versus a family airplane with the 182S.” Once the club got the Cirrus, the thinking was it should be located near the most members. About 60 percent of the members live near Indy Metro, so the Cirrus is based there and the 172RG moved to Indy Regional.

One of the lessons Sky-Vu learned in adding higher-end aircraft to the fleet is that members will fly them – even if they cost more. When the club added the G1000 182 in 2006, “we had some really animated debates about we’re going to buy this expensive airplane and nobody is going to fly it because nobody is going to want to spend that kind of money,” Ron said. “We put 300 hours on it the first year. People flew the wheel pants off that thing, and it was the most expensive airplane.” 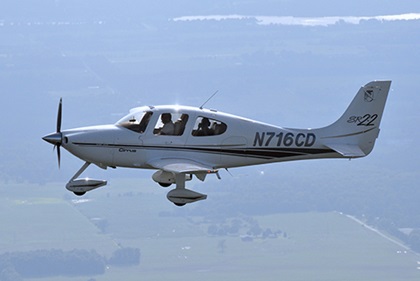 The club had a similar discussion when they were considering adding the Cirrus in 2017. Some members questioned who would pay about $50 an hour more for the Cirrus over the 182. The result was the same as when the 182 joined the fleet. “We put 365 hours on the Cirrus the first year we had it, and our rolling 12-month average is 317 hours.”

Ron believes that is a good lesson for other clubs. “If you’re in a metropolitan area like Indianapolis, or like Columbus, Ohio or Pittsburgh or places like that and you’ve got a 172 and you’re afraid to get another airplane that’s going to cost you more, just don’t sweat it would be my advice,” Ron said.

One hallmark of a successful club is its safety culture. Having dozens of different pilots flying a variety of planes can increase the potential for safety issues. One way that Sky-Vu minimizes that possibility is by standardizing avionics across the aircraft.

All five planes have the Garmin GTX 345 transponder and four have the GTN 650 GPS. The only aircraft that doesn’t is the 182 with the G1000 panel, which is still a Garmin product. 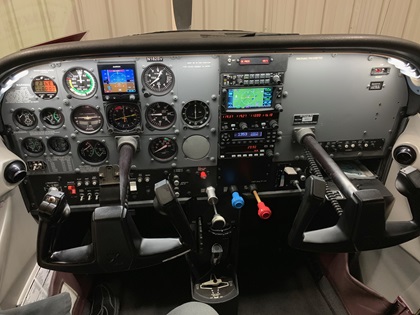 “Harmonizing all the avionics we think is a significant safety factor that goes into our airplanes,” Ron said. “By making it easier to transition, you make it safer because if you’re an IFR pilot and you’re flying in the soup in a plane that you don’t normally fly, you want to keep distractions to a minimum.”

The club also has instilled in its members to report any squawk on the log sheet, even the most minor of issues like a loose screw. This gives the next pilot an opportunity to see if there were any reported issues on prior flights and the maintenance officer the opportunity to correct any problems.

But more importantly, Sky-Vu publishes all squawks. When Ron picks up the log sheets each month, he records the squawks for each airplane and sends them out to the members. In addition, the maintenance officer logs all squawks in Schedule Master, the online system for reserving an aircraft. This allows members to see squawks when they schedule a plane. Members also can subscribe to receive an email automatically whenever a squawk is recorded for a particular aircraft in Schedule Master.

The club also offers an incentive to members who participate in the FAA Wings program. Any member who completes a phase of the Wings program is awarded a flight credit equal to the value of one hour in the lowest-cost aircraft. The flight credit can be used in any of their airplanes.

The flight credits are not limited to safety. Members of the board all earn flight credits for their work. The credits vary from half a credit, or the value of half an hour of flight time in the lowest cost aircraft, to one flight credit for each aircraft the maintenance officer or treasurer manages. 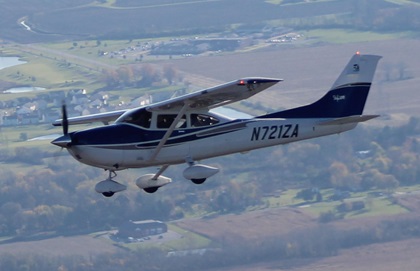 This system has a few advantages. First it creates interest in serving on the board. As with most organizations, 20 percent of the people do 80 percent of the work. By offering an incentive, when board positions become available, the credits help ensure there are multiple members interested in stepping up. In addition, it helps instill a higher level of professionalism and accountability in the board members. “I think it contributes to having that business-like approach to running the club,” Ron said. “You guys are getting paid something in the way of flying credits, so we [the members] expect a certain level of performance.”

The credits expire a year after they were earned, so all the credits earned this year are good until the end of next year. Ron said he’s a fair weather, VFR pilot and he doesn’t use all of his credits but it all works out. Non-board members can also earn flight credits – for making aviation-oriented presentations at the club’s monthly meetings, performing authorized maintenance like an oil change, or other special services like coordinating a club-wide survey, etc.

The club is able to offer credits because of a solid financial footing. “We have fully-funded reserves, which is an important strategy that we maintain here,” Ron said. Of particular note, there have been no special assessments to members in at least 41 years. Ron has been treasurer for 25 years and his predecessor was treasurer for 16 years. Ron knows there hasn’t been an assessment while either of them have been managing the finances, and possibly even longer.

From an accounting point of view, it is important that all credits are listed as expenses in the club’s financial records, in order to ensure compliance with FAA rules for non-profit flying clubs.

Dues are $135 a month and aircraft rates are adjusted monthly based on fuel costs. This allows the club to charge what it actually costs to operate the aircraft. Ron pointed out a ten cent swing in a gallon of gas equates to about a dollar an hour difference in most the club’s aircraft and that can add up. Current rates are posted on the website each month.

Sky-Vu is an equity-based 501(c)7 non-profit corporation that owns the airplanes. There is no set buy-in cost “as members are allowed (and encouraged) to sell for whatever they can get for their memberships,” Ron said. “The average cost so far this year has been about $5,600".

Having a club with so many members spread out among three airports can create some challenges. Sky-Vu tries to build camaraderie through its monthly meetings, which rotate between Eagle Creek and Indy Metro airports and through events during the year.

There is an annual holiday party that usually attracts about 40 people and the club holds BBQs at the different airports from time to time, although it is sometimes challenging to get good attendance. One event that was successful was a BBQ in which all the airplanes were brought to one airport so members could show their friends and family the entire fleet. 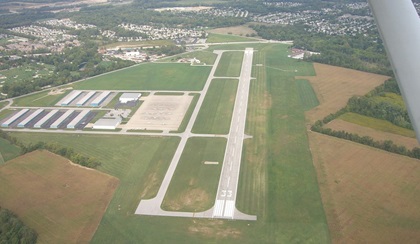 Another challenge is performing maintenance on the planes. The club rarely does its own maintenance, although it does some owner-allowed maintenance such as oil changes and replacing bulbs. Generally, work is performed where the airplanes are based, so the club uses maintenance shops at all three airports. Depending on a particular shop’s schedule, the club sometimes has to shuttle aircraft to other airports, which adds time and expense.

Although operating more aircraft presents some logistical challenges, Sky-Vu Flyers has demonstrated for many decades that it is possible to successfully run a large flying club with multiple airplanes at multiple airports. It starts with a clearly stated purpose and strong communication. Providing aircraft in good condition with similar avionics makes transitioning among airplanes easy for members and creates a safety culture. Maintaining a strong financial base and professional standards in how business is conducted creates an atmosphere that allows the club to serve its members and provide the type of aircraft members want in the location they want them.