Get the app Get the app
AOPA Members DO more LEARN more SAVE more - Get MORE out of being a pilot - CLICK HERE
Events Community Events R. A. Hoover Trophy Reception

Celebrating the legacy of R. A. “Bob” Hoover

It is our sincere honor to continue furthering Bob Hoover’s legacy by awarding the 2022 trophy to SENATOR JAMES M. INHOFE! 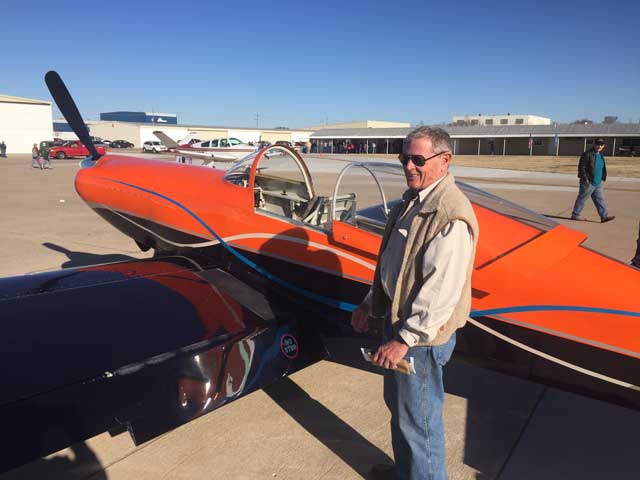 A pilot with over 11,000 flight hours, no one on Capitol Hill has protected the freedom to fly more than Sen. Inhofe. Even prior to his election to the United States Senate in 1994, Inhofe has been a tireless advocate for the entirety of general aviation and has made its priorities his own. Inhofe became the first member of Congress and only Senator to fly an airplane around the world when he recreated Wiley Post’s legendary trip around the globe in 1991. In 1993, he steadfastly supported the General Aviation Revitalization Act to bring about a renaissance in general aviation aircraft manufacturing. 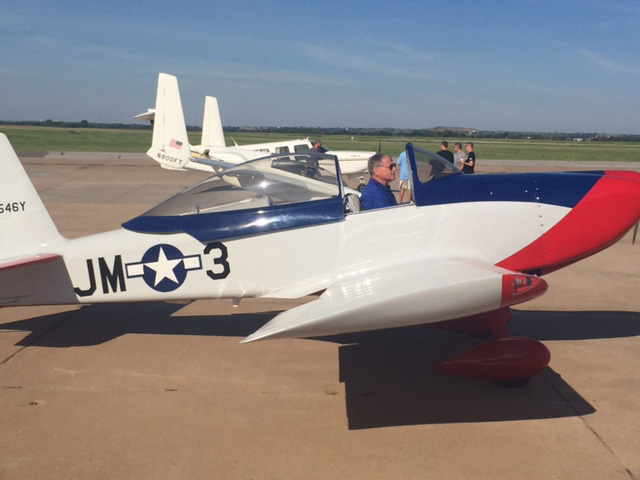 During his time in the Senate, Senator Inhofe championed important policies and legislation that have benefited every pilot and aircraft owner flying today: enacting into law the Pilot’s Bill of Rights which leveled the playing field between pilots and the FAA during enforcement proceedings; securing Third Class Medical reform and creating the BasicMed program used by tens of thousands of pilots flying today; extending the Volunteer Protection Act to include volunteer pilots; and reforming FAA’s regulations governing designated pilot examiners to reduce check ride wait times for all pilots. Over the years, he strongly opposed numerous attempts to raise user fees and taxes on general aviation community and successfully fought against efforts to privatize our nation’s air traffic control system. 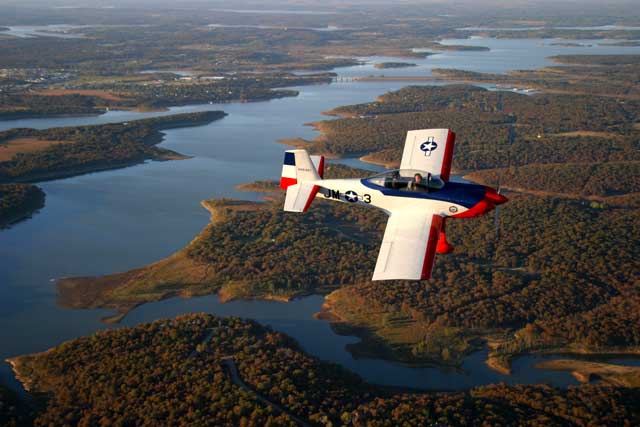 More of Inhofe’s most notable congressional feats for general aviation include: prioritizing federal investment in general aviation airports; supporting the development and dissemination of STEM Aviation Curriculum in our nation’s high schools; modernizing FAA’s mandatory curriculum for aviation maintenance schools; requiring the development of a system to bring real-time status of special-use airspace directly into the cockpit for pilots; supporting private sector efforts to develop an unleaded fuel solution; working to create the National Center for the Advancement of Aviation, and successfully shepherding legislation through Congress to reinstate the legendary Bob Hoover’s pilot’s license.

A block of rooms has been secured for this event: Renaissance Arlington Capital View Hotel, located at 2800 South Potomac Ave, Arlington, VA 22202, (703) 413-1300. Room rate is $247 plus tax per night. There is an additional cost for parking at the hotel. Please identify yourself as part of the Aircraft Owners and Pilots Association group. Book your group rate for AIRCRAFT OWNERS AND PILOTS ASSOCIATION HOOVER AWARDS

If you have any questions or require additional information, please email: Kelly Haga - [email protected]

We look forward to another great evening!

History of the Hoover Award

AOPA was founded 83 years ago with one simple mission: “Protect the Freedom to Fly.”

No one embodies that spirit more than the late R. A. “Bob” Hoover. A true pioneer, Bob inspired so many with his passion for flight, unbelievable skills, his humility, and an unwavering commitment to the aviation community.

The first Bob Hoover Trophy was presented to Bob, himself, in 2016 during the unveiling of the statue in his likeness at the Smithsonian National Air and Space Museum's Udvar-Hazy Center.

Bob agreed to have his name forever memorialized as a tribute to aviators whose airmanship, leadership, mentorship, and passion for aviation inspires a love of flight in others. AOPA has been entrusted with carrying on his legacy through this annual award.

In the words of Bob, “The most important thing any aviator can do is to encourage others to want to fly.”

That is one of the reasons why all of us here at AOPA share Bob’s passion, and a big reason we started AOPA’s You Can Fly initiative. 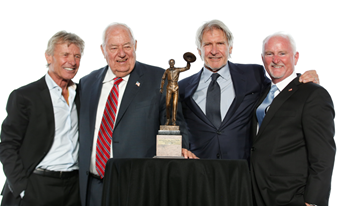 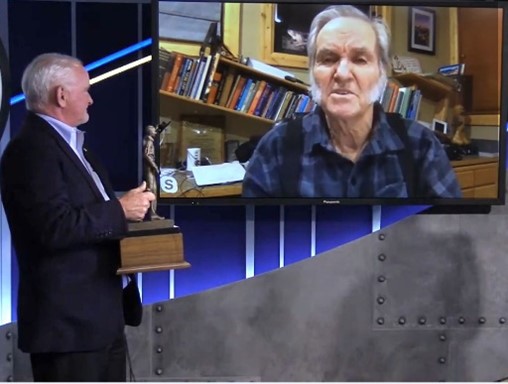 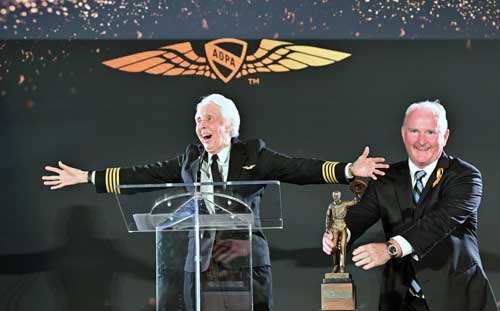 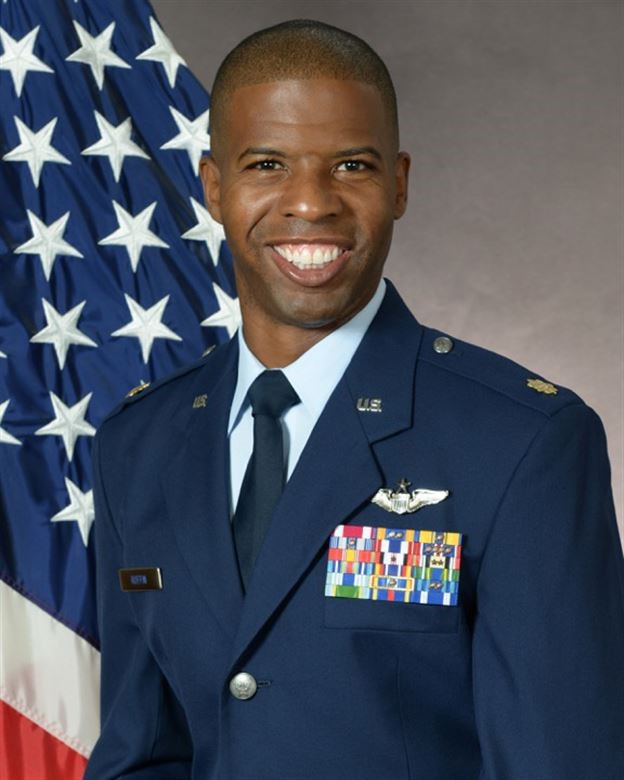 Other awards presented during this special evening are the Hartranft Award, named after AOPA's first president and former chairman of the board "Doc" Hartranft. It is given annually to elected or appointed government officials for their significant contributions to the advancement of GA. It was presented in 2017 to Congressman Todd Rokita (IN); in 2018 to Congressman Ralph Abraham (LA) and Congressman Steve Russell (OK); to Sen. Jerry Moran (KS) in 2019; to Sen. Tammy Duckworth (IL) in 2020; and to U.S Representative Rick Larsen in 2022.

The Sharples Award, named for AOPA's first chairman of the board, Laurence P. Sharples, is given to those who may not work directly in aviation but who have made extraordinary contributions to GA. It was presented in 2017 to Pat Hartness; in 2018 to Ron Dearborn, AOPA Airport Support Network Volunteer; in 2019 to Hawaii State Sen. Kai Kahele; in 2020 David DeVries, President and Founder of the Out-Of-The-Blue Scholarship Foundation; and Dewey Davenport and Tony Restaino in 2021 and 2022.

In addition, the AOPA Air Safety Institute believes that knowledgeable people, well-trained and proficient in their craft, and operating reliable equipment in a culture that promotes sound aeronautical decision making, will achieve strong safety performance. It recognizes individuals and organizations that have made extraordinary safety enhancements for general aviation.

We established the AOPA Air Safety Institute's General Aviation Safety Award to honor those that have delivered exceptional safety performance and innovations. This award was first presented to Dick VanGrunsven of Vans Aircraft in 2018; in 2019 to Tyson Weihs and Jason Miller of Foreflight; to Boris Popov, Founder, BRS Aerospace, in 2020; and Garmin in 2022.