Get the app Get the app
AOPA will be closing at 2:30pm ET Wednesday, November 23rd, and will remain closed Thursday and Friday in observance of the Thanksgiving holiday. We will reopen Monday November 28th at 8:30am ET.
AOPA Members DO more LEARN more SAVE more - Get MORE out of being a pilot - CLICK HERE
Training & Safety Flight Training Flight School Business Flight School Business The AeroCamp experience

Are you looking for a fun way to attract new young people to your flight school? Triad Aviation Academy may have the answer. Bruce McCall is the owner of Triad Aviation Academy, located at Piedmont Triad International Airport (GSO) in Greensboro, North Carolina. As a successful Part 141 flight school, Triad is doing many things well. But the success of its AeroCamp youth program caught my attention. 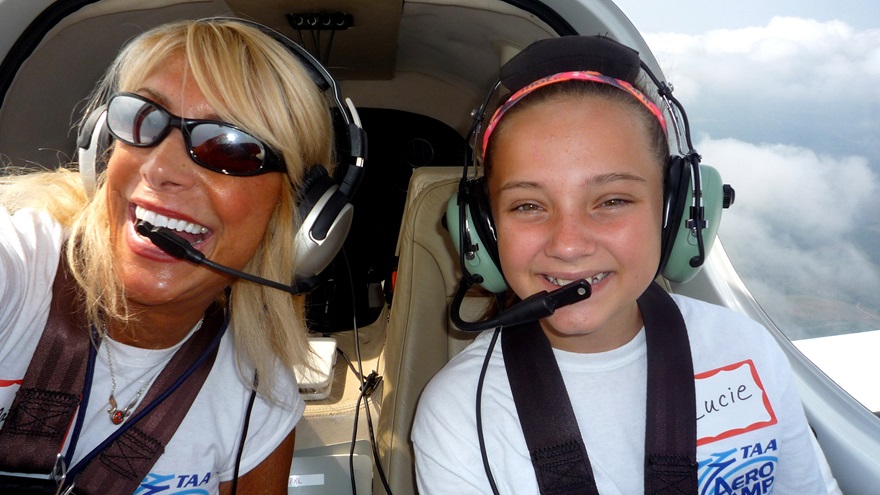 AeroCamp is a registered trademark of the Flight School Association of North America (FSANA). Volunteers and members of FSANA have organized AeroCamp as a turnkey, step-by-step program that can be used by participating flight schools. McCall and his team have been running AeroCamps since 2014.

“It’s a great program,” McCall said. “FSANA has done the hard work to develop the outline full of detailed tips and techniques. The program is designed to be customized for each flight school’s unique circumstances.”

Each summer Triad operates several camps with a total enrollment of 30 to 40 youth, ages 12 to 16. “We love seeing the young people get excited about aviation,” McCall said. “From a business perspective, we know that many of these youth will continue on to earn their pilot certificates, and some of them will pursue aviation careers because of the work we are doing here. Even the 12-year-olds are just a few short years away from being old enough to solo. It’s never too early to inspire their imagination and show them the path to achieving their aviation goals and dreams,” he said.

First-year cadets enjoy activities from 9 a.m. to 3 p.m. for five days, Monday through Friday. “It’s a full schedule,” McCall said. “We have organized tours of the control tower, airport fire department, TSA, airport police, avionics and upholstery shops, large jet airplanes, a weather station, and FedEx.” Triad includes flight simulator time, building and flying model balsa planes, and a “Dirty Day” where cadets get hands-on experience with shop mechanics. Two training flights with an instructor are included as part of the regular agenda. By the end of the fifth day, cadets have experienced a wide range of activities while observing several different aviation career paths.

After its first year hosting an AeroCamp, it became clear that Triad needed a plan for those cadets to return the following year. “Our first-year cadets had so much fun. By the end of the week they were enthusiastically asking, ‘What do we get to do next year?’ I got together with my team and AeroCamp 2.0 was born,” McCall explained. Triad now has AeroCamp 2.0 and 3.0 for second- and third-year cadets. AeroCamp 2.0 is a four-day program that focuses on flight training with an emphasis on cross-country planning and dual flight instruction. AeroCamp 3.0 is a four-day program that includes an overnight flight (with parents attending) to First Flight Airport in Kill Devil Hills and a tour of the Wright Brothers National Memorial.

“We’re currently developing AeroCamp 4.0 for 2018, which will include a multi-day trip to AirVenture at Oshkosh. It just keeps getting better and better. Our first- and second-year cadets are excited to keep coming back for more,” McCall said.

McCall enlisted the help of 15-year-old Daniel Zukowski to help organize Triad’s first AeroCamp. “It’s been great having Daniel’s assistance, especially that first year. His input and perspective as a youth has been extremely valuable as we put together the program outline and specific activities,” McCall said.

Zukowski shared a little about his background and experience. He said, “I’ve been blessed to be flying since I was very young. I was an Explorer Scout and then when I was 15 Bruce offered me the position of volunteer assistant director for Triad’s AeroCamp program. It’s been fun and rewarding.”

Now 18, Zukowski is a 270-hour private pilot working on his Instrument rating. When asked what he likes most about working with the AeroCamp program, Zukowski said, “I really enjoy seeing the cadets achieve their dream of becoming a pilot. It’s rewarding for me to know I played a small part in helping them do it.”

A cadet named Josh attended Triad’s first AeroCamp in 2014 and has returned each year for the subsequent camps, even though it’s a 1.5-hour commute each way, Zukowski said. “Josh’s parents have been such a great support. They made that drive to bring Josh to camp each morning and pick him up each afternoon, not to mention the subsequent training days. Josh was only 14 when he joined us for the first AeroCamp. He’s now 17 and scheduled for his private pilot checkride next month. I’m so proud of him. It’s been fun to be a part of his journey,” Zukowski said.

When asked about the benefits of the AeroCamp program, McCall said, “All the smiles on the kids’ faces are enough to keep me going, but there are certainly business advantages as well. We’ve acquired several new flight students through the AeroCamp program, including some of the parents. The positive press from local media has also been a great boost to our business.”

What advice does Triad have for other flight schools that want to run the AeroCamp program? “The first step is to join FSANA and follow their AeroCamp program. They’ve already done the heavy lifting and there’s no need to reinvent the wheel. With a little customization you’ll be up and running in no time,” McCall said.

More information about FSANA and the AeroCamp program can be found online. Contact Bruce McCall at 336-369-2804.

Jim Pitman has been a flight instructor since 1997. He has been a Part 141 chief flight instructor, Cessna Pilot Center regional manager, and Arizona Flight Instructor of the Year. He flies the Canadair Regional Jet for a U.S. carrier while operating his own flight training business. Connect with Jim at his website.