The addition of an instrument approach at a given airport can greatly enhance its value to the aviation community. Moreover, the access afforded by an instrument flight procedure (IFP) under a wide variety of meteorological conditions can be a catalyst for increased aeronautical activities. Historically, most flight procedures have been based on terrestrial navigational aids (navaids) requiring a considerable investment in equipment and resources. These legacy procedures are quickly being replaced with Global Positioning System (GPS)-based approaches. The infrastructure required to support traditional ground-based facilities is no longer necessary in obtaining an instrument approach with GPS, which is enabling access to more airports.

The Importance to Our Members

Although GPS has the potential to support IFPs at hundreds of airports, implementing a new procedure is far from a simple undertaking. Obtaining an instrument procedure is a complex, multidisciplinary effort requiring the collaboration of many professionals within the FAA. The goal of this article is to discuss the effort it takes to maintain the number of IFPs in the National Airspace System (NAS), the process for requesting a new procedure, and the requirements that must be satisfied prior to the authorization of a new instrument approach.

According to the Aeronautical Information Services (AIS) website, AIS is the FAA department that “develops and maintains all public instrument flight procedures and airways.” In Fiscal Year 2015, AIS spent about $41.2 million on procedure maintenance. This cost includes notam requirements, the review of procedures for new obstacles, amendments based on user requests or changes to criteria, and other factors. Flight inspection of the procedures cost $8.2 million for that same year. The average cost in 2015 for an initial flight inspection was $4,415, and the cost of a recurrent validation inspection was $2,943. The cost varies from procedure to procedure due to varying development and maintenance requirements.

Within AIS three offices, called Flight Procedure Teams (FPT), are responsible for the drafting and production of a new procedure. Each FPT is responsible for a different region of the country. The full development time for a new procedure in 2016 was estimated to be about two years, largely because of the considerable workload caused by the thousands of existing procedures that the specialists must maintain. Most approach procedures are reviewed every two years. There is an effort underway to remove redundant IFPs so that the development of new procedures can be implemented more quickly and increase access to more airports.

The FAA’s Instrument Flight Procedures (IFP) Information Gateway is the web portal the public can use to request new procedures and to preview and comment on procedures in development. The IFP request form includes general questions to establish what type of procedure is desired and whether any coordination has been done with airport management. The IFP Gateway also can be used to subscribe to an airport to see alerts to proposed changes to the IFPs. 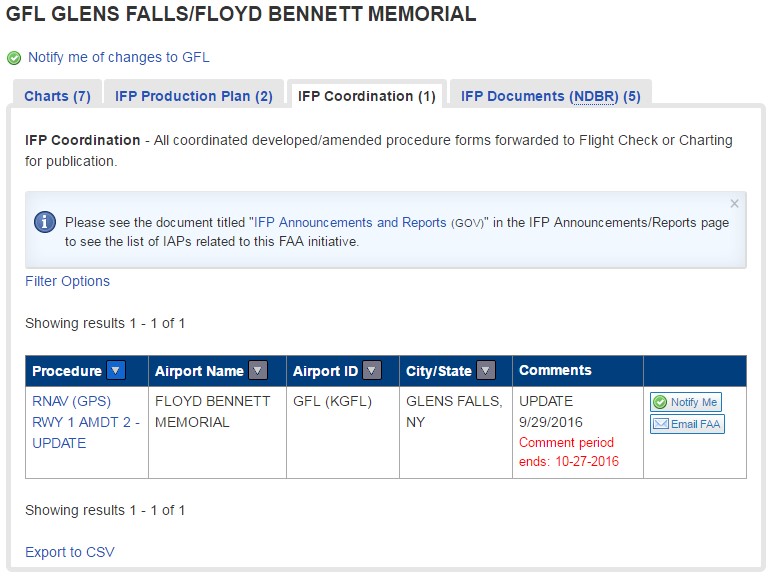 Below is a brief overview of the process that accompanies a request for an instrument approach; however, the FAA has a thorough description of the current process on the AIS website. Although it is depicted as a linear progression, several of these processes may run concurrently depending on the task at hand.

The process of acquiring a new IFP is generally similar regardless of an airport's current status (VFR vs. IFR). Any party with an aeronautical interest may submit a request for an instrument approach including:

As a practical matter, individuals who wish to get an approach procedure approved should involve airport management in the initial phase of their request because the addition of an approach will likely require an update of the Airport Layout Plan (ALP). If such a plan does not exist, much of the information that would be found in an ALP will need to be collected prior to further development.
Requests should be submitted to the FPT via the IFP Gateway. The FPT is responsible for coordinating with the Flight Standards, Airway Facilities, Air Traffic, and Airports Offices whose participants will comprise the Regional Airspace and Procedures Team (RAPT). The FPT will conduct the initial feasibility study and then make recommendations to the RAPT concerning whether to proceed with development or to deny the request as not feasible at this time.

Note: A request for an instrument approach procedure will be denied if a previous airport study was not approved, and the existing condition has not been corrected or mitigated in a manner acceptable to the Administrator.

As part of the initial assessment, the FAA will determine whether the request is for public or private use. If the request is for public use, the FPT will solicit specific airport data. It is important to note that in many cases, federal, state, or local government agencies may be able to provide financial assistance with the costs associated with the development of the ALP and the gathering of data for public-use airports. Regardless of the costs, it is the responsibility of the airport sponsor (or the sponsor’s designee) to provide the necessary information to the FAA. Airport data requirements may include:

If the airport in question is a private-use facility, it will be necessary to contact the Reimbursable Agreements Office in Oklahoma City to initiate the agreement process. It should be noted that even a privately developed flight procedure may be subject to the FAA's quality control and flight inspection process, and these activities carry with them an associated cost. Many individuals hire a third party procedure developer, such as Jeppesen, as they can have a faster turnaround time than the FAA.

Below are some 2016 example costs for procedure development and maintenance:

The proposal will be submitted to the appropriate Flight Procedures Office for processing. The RAPT will review the request for complete and accurate data. After this process has been initiated, there is very little opportunity for intervention by parties not directly involved in the evaluation. However, if additional information is required, the request may be returned to the originator. If airspace changes are required, a Notice of Proposed Rulemaking (NPRM) to enact controlled airspace will be conducted.

The request will be assigned to a specialist who will review the layout and design of the procedure and coordinate these findings with the controlling air traffic facility. The instrument approach will then be designed using the applicable Terminal Instrument Procedures (TERPS) criteria. Any airspace actions and safety considerations will be studied as necessary. The completed procedure will be sent to Quality Control for evaluation. There it will be finalized and forwarded for flight inspection. 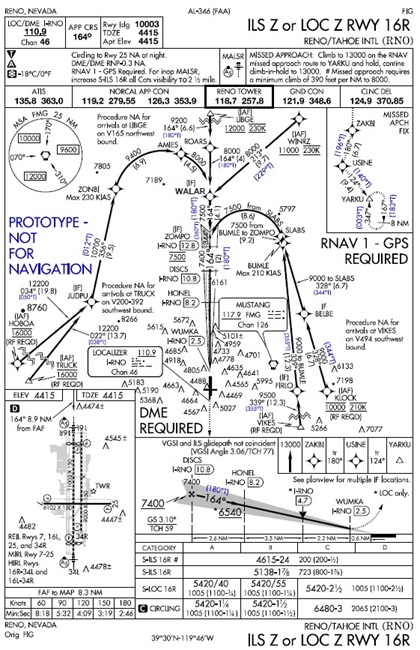 The IFP Gateway can also be utilized to request amended approaches, such as changes to feeder routes and other enhancements. New or amendments to T-Routes can also be submitted via this tool.

For all other procedure requests and questions, pilots can contact the FAA via an aeronautical inquiry.

AOPA applauds the FAA's efforts to broaden the reach of GPS to service new airports and recognizes the complexity and effort that goes into the creation of new procedures and into the maintenance of the tens of thousands of procedures in the NAS. Additional instrument approaches serve to enhance the flexibility of general aviation by facilitating greater access to airports throughout the NAS.
Although AOPA does not influence the priority or funding of additional instrument procedures, the association’s technical staff is available to answer questions and clarify portions of the process as needed.